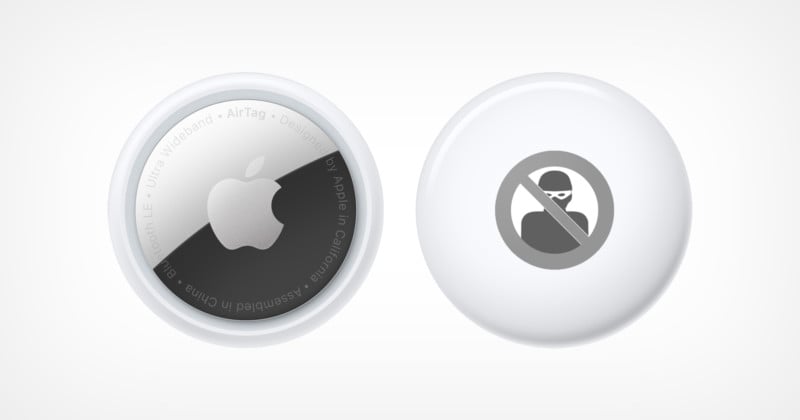 When Apple announced the AirTags last week along with the new iMac and iPad Pro, photographers immediately thought these might be able to help find stolen equipment. However, what is being called an “anti-stalker” privacy feature made it seem like that might not work. Luckily, Apple’s design addresses this.

The concept of AirTags is simple: these little discs work together with iOS devices running version 14.5 or later and the Find My app to find items that they are attached to. In Apple’s marketing, all the use cases are for lost items, not stolen ones.

Still, the allure of being able to track a camera bag that may have been stolen out of your car or off your person on the street remained.

However, while most people would only consider the benefits of tracking items, there is an issue of privacy: it’s possible that an AirTag could be used to track someone unwittingly. To address this, Apple built-in privacy and security measures. For starters, no location data or location history is stored in the AirTag and communication with the Find My network is end-to-end encrypted so that the owner of the device has access to its location data (not even Apple).

Additionally, Apple built-in proactive features that “discourage unwanted tracking,” which it calls an industry first. According to company literature, “Bluetooth signal identifiers transmitted by AirTag rotate frequently to prevent unwanted location tracking. iOS devices can also detect an AirTag that isn’t with its owner, and notify the user if an unknown AirTag is seen to be traveling with them from place to place over time.”

That last bit stating “over time” is slightly confusing, as it has led some to assume your iOS device would notice an AirTag and alert you after 15 or 30 minutes. But PetaPixel confirms a report that this is not how this feature works: the privacy feature doesn’t activate a notification based on time, but instead uses location.

Your iOS device will recognize rather quickly if it senses a foreign AirTag that is traveling with you, but it won’t notify you right away. It will only notify you once you reach what is your “home.” This location of “home” is determined by your Address Book.

This means that if you place an AirTag in an equipment bag and that bag is stolen, the thief won’t know if you’ve hidden an AirTag in the bag as they continue to drive or walk around with it. Only if the thief has an iOS device running iOS 14.5 or later will they be notified that there is an unidentified AirTag near them once they take the stolen bag “home.” In the case of theft, this will give victims a good deal of time to report the device as stolen to police and actively track it using the Find My app — especially since even if the AirTag is disabled, the last known location will still be shown.

Logically, the way Apple has implemented this makes a lot of sense. While the company still wants to provide its users with privacy and security, it also recognizes that in places like New York, San Francisco, Tokyo, and other cities, it is highly likely to come in contact with many “unrecognized” AirTags on other people while on a bus, a subway, or even a popular long main street. If it was time-based, iOS devices would constantly be alerting users to unidentified AirTags all around them on even medium-length trips. The way Apple has implemented this feature helps mitigate those false positives.

Because of Apple’s design choice here, it is very much possible to use AirTags as a way to find and track stolen items within a short period of time after they have been stolen (before the thief returns “home” with the ill-gotten-gains), even though that is not the intended design of the device. As noted, Apple really only intends the AirTags to be used to find lost items. Still, many photographers are likely to consider adding an AirTag into their gear bags and luggage considering that the tags themselves are a pretty affordable yet high-tech solution for keeping tabs on expensive equipment.

Google Explains How its HDR+ with Bracketing Technology Works