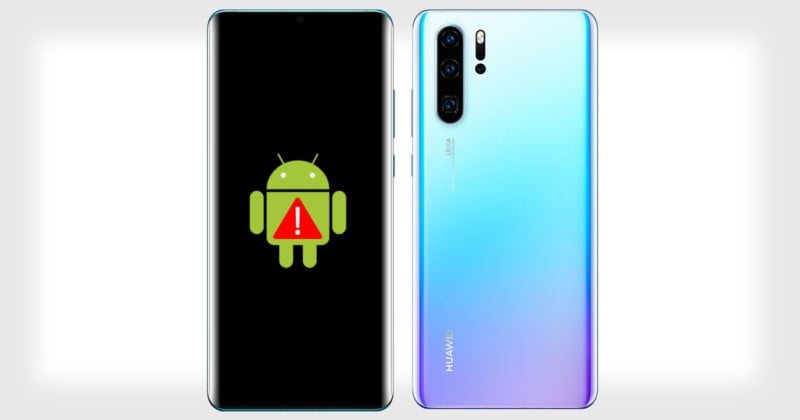 If you’ve been eyeing Huawei’s latest P30 Pro smartphone and its ISO 409600 low-light capabilities, you should know that there’s major trouble brewing for the brand due to a the US government blacklisting it. Google has reportedly suspended its business with Huawei, including dropping Android support.

Reuters reports that Google has suspended all business with Huawei that involves the transfer of hardware, software, and technical services, though Huawei can continue to access Google products that are publicly available through open source licensing.

Huawei is immediately losing its access to Google’s Android operating system updates, and future Android-powered smartphones by Huawei will not have access to Google apps and services such as the Google Play Store, Gmail, and YouTube.

“Huawei will only be able to use the public version of Android and will not be able to get access to proprietary apps and services from Google,” a source tells Reuters.

But if you already own a Huawei device, you’ll continue to be able to use and download updates for Google apps for now.

For Huawei users' questions regarding our steps to comply w/ the recent US government actions: We assure you while we are complying with all US gov't requirements, services like Google Play & security from Google Play Protect will keep functioning on your existing Huawei device.

Here’s a statement by Huawei in response to Google’s decision:

Huawei has made substantial contributions to the development and growth of Android around the world. As one of Android’s key global partners, we have worked closely with their open-source platform to develop an ecosystem that has benefitted both users and the industry. Huawei will continue to provide security updates and after-sales services to all existing Huawei and Honor smartphone and tablet products, covering those that have been sold and that are still in stock globally. We will continue to build a safe and sustainable software ecosystem, in order to provide the best experience for all users globally.

While Huawei’s Chinese market may see minimal impact from Google’s suspension — users largely use Huawei’s proprietary software and homegrown apps — it could have a major effect on international markets. It remains to be seen whether these actions cripple Huawei’s ability to become a major player in the smartphone photography space that it has been working hard to grow in.

Peak Design Made a Travel Tripod with Game-Changing Compactness