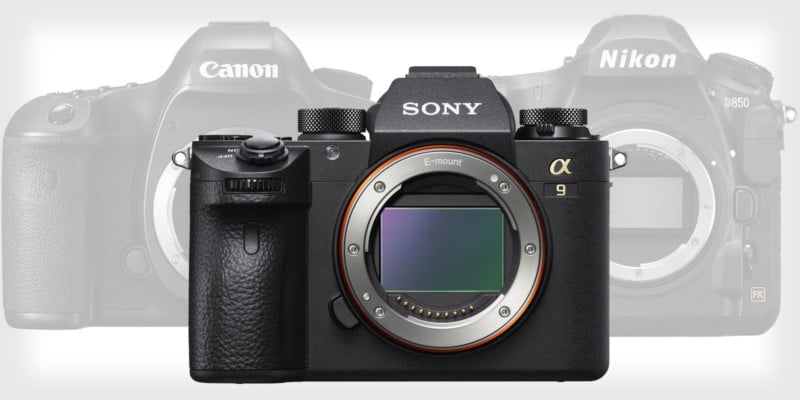 The ongoing battle over camera supremacy between Canon, Nikon, and Sony is receiving more mainstream attention in the business world. Bloomberg has published a report on the rise of Sony through its mirrorless cameras and states that Sony is now winning over professional photographers.

Sony has enjoyed a sizable lead in the booming mirrorless camera race thanks to its willingness to launch full-frame mirrorless cameras while Canon and Nikon largely twiddled their thumbs and continued focusing on their bread and butter DSLR businesses.

As a result, Sony is now chipping away at the duopoly’s lead in the $3.2 billion market of cameras geared toward professional photographers.

“Even so, adoption has been slow,” Bloomberg writes. “Pro shooters are a loyal bunch, sticking to familiar gear with proven reliability. They also make substantial investments in what they call glass, the assortment of interchangeable lenses that easily cost more than the camera body.

“Some pros say Sony hasn’t rolled out new lenses fast enough, and have complained that customer support has lagged behind Canon and Nikon.”

Sony is working hard to both expand its lens offerings and improve its support for photographers shooting its gear.

“We were aware from the beginning that [Sony cameras] would be for pros,” Sony product planning manager Hiroyuki Matsushita tells Bloomberg.

Sony’s focus on creating imaging sensors and dominating the business has caused record profits to pour into its coffers in recent days, and the company expects its camera business to grow its operating profits by up to 40% in just 3 years to nearly $1 billion, Bloomberg reports.

The company also said back in May that it’s aiming to be the top camera brand by 2021.

But whether Sony can continue to capitalize on its mirrorless lead and grow in its market share depends on how it fares upcoming competition that’s just around the corner: Nikon will be unveiling its full-frame mirrorless camera on August 23rd, and Canon is rumored to have one following close behind.

25 Tips and Ideas for Your Landscape Photos