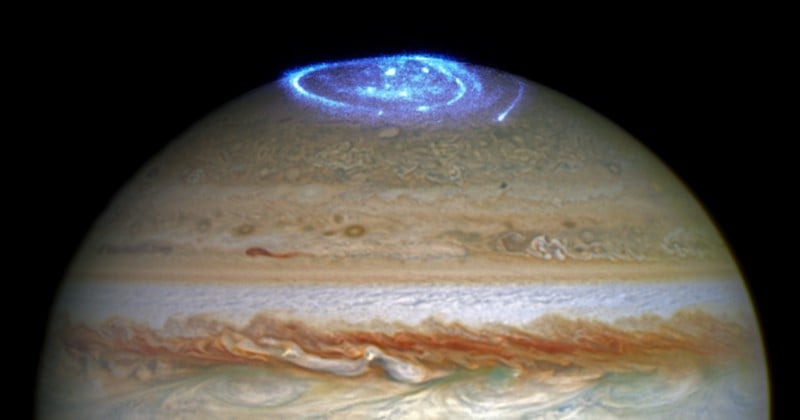 Photographers go gaga over the Aurora Borealis on Earth, capturing amazing timelapses and photographs and even live video from 35,000 feet. But no Earthly aurora will compare with what Hubble just captured swirling atop Jupiter.

The photo is breathtaking, all the more so once you understand that the aurora you’re looking at in the image below covers an area larger than our Earth.

These light shows at Jupiter’s poles actually never stop, revealed NASA, they’re always available for study and capture. The image below was created by combining an earlier Hubble photograph of Jupiter itself with new images of the auroras captured by the Hubble Space Telescope Imaging Spectrograph at the far end of the ultraviolet light spectrum. The image, released earlier today, has captured the world’s imagination just as NASA spacecraft Juno is arriving at Jupiter after a 5 year long voyage.

Among other things, the spacecraft will monitor these massive auroras created by the solar system’s largest and most powerful magnetosphere, while Hubble takes pictures of them every day to see what impact solar wind and other conditions exert.

Here are some composite video sequence Hubble released alongside the standalone image:

“These auroras are very dramatic and among the most active I have ever seen,” principal investigator of the study Jonathan Nichols, from the University of Leicester, UK, said in a statement. “It almost seems as if Jupiter is throwing a fireworks party for the imminent arrival of Juno.”

A fireworks display worthy of the largest planet in our solar system.

To learn more about the image above or the Juno spacecraft and its imminent mission, head over to the Hubble website by clicking here.

(via Hubble News Center via CNN)