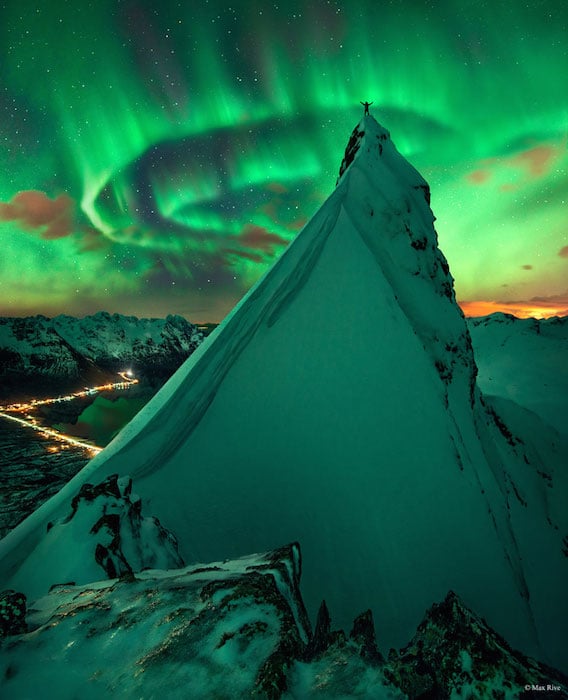 Conveying the grandeur of the Aurora Borealis is a serious challenge for a photographer. How are you supposed to capture the splendor of the event, give it a sense of scale, and somehow imbue that photograph with the emotion involved in actually witnessing the polar spirits for yourself?

There probably isn’t a magical mixture of ingredients that will yield the ideal northern lights photograph, but the image above by photographer Max Rive is one of the closest we’ve seen, and he was kind enough to share the details behind it with us.

The photo, which is made up of 3 exposures, was captured in March above Austnesfjorden close to Svolvear on the Lofoten islands, Norway. On a snowboarding trip to the region, Rive set aside an extra week for photography and spent the weeks prior finding locations using online-hiking maps, Google Earth and Google Images.

Funny enough, this particular peak wasn’t even on his list. “On this day we thought we were heading to the summit of Matmora, which was on my list,” he explains, “but went to a false peak of the neighboring summit (Durmalstinden, 828m) instead, which wasn’t on my list.”

Returning that night to the same location, he had his friend Philippe Bouillard climb up to the top of the peak, giving him a very simple set of instructions: when you see the Northern Lights, put your arms up.

In the meantime, Rive himself set about composing the perfect image. He explains his process below:

What I really like about this spot are the pointy rocks in the foreground which lead my eye directly towards the peak. You can also follow the foreground all the way to the mountain peak. I took some test shots during daytime and it was quite a task to get the exact same composition again, especially because I was very close to the nearest rock.

I also found the shape of the mountain very spectacular, which looks a bit like the Matterhorn. The peak is only 20 meters higher than the camera but it is so small and steep you have a view on both sides which is very unique and hard to find.

The light pollution from the city of Svolvear on the right does give some balance to the lights of the houses and streets in the valley on the left. In the beginning I was not sure whether I should put the peak in the middle or put it a bit more on the right side. I choose for the last option because I wanted to put some attention on the left side which looks more interesting than the right part. The non-symmetrical shape of the mountain did allow this.

In the end, it took three nights to get the final shot. The first two were too cloudy, so they sat atop the mountains and ‘danced’ to make sure they didn’t freeze while they waited for the perfect conditions. On night three, mother nature delivered.

The lights were active the entire time, allowing Rive to adjust the exposure as needed each time they got really bright and spectacular.

Here’s one last look at the final shot: 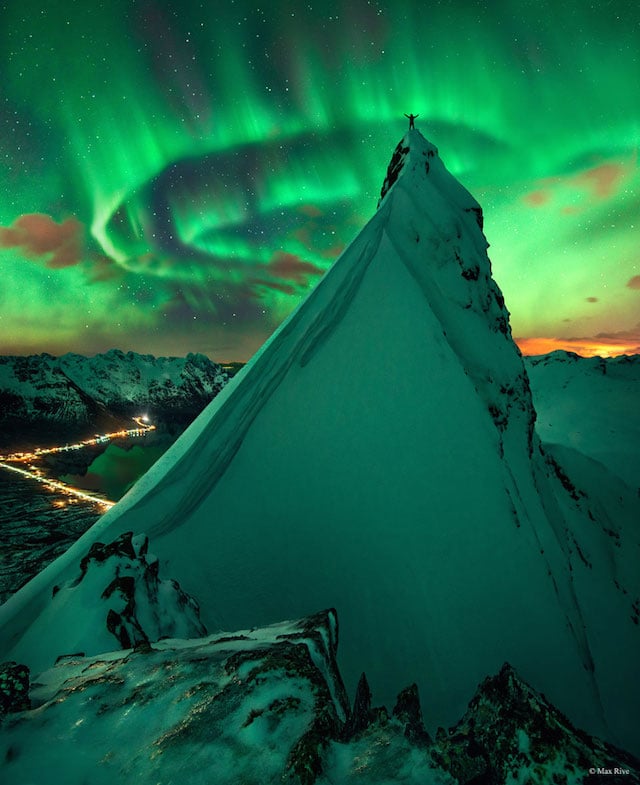 To see more of Rive’s photography, or if you’d like to follow along as he captures more images, head over to his Facebook page by clicking here. You can also follow him on Flickr and 500px if either of those are your cup of tea.

Image credits: Photographs by Max Rive and used with permission