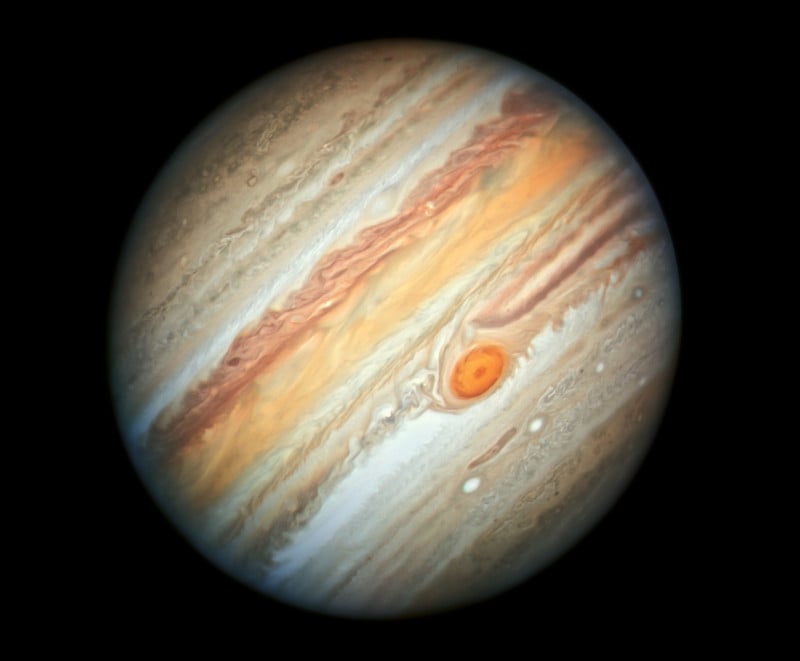 The Hubble Space Telescope has captured a new portrait of Jupiter that shows the gas giant’s details, including the Great Red Spot, in a more intense color palette than in the past.

The photo was captured back on June 27th, 2019, and just published this month by NASA. The telescope’s Wide Field Camera 3 shot the imagery in visible light while Jupiter was 400 million miles away from Earth and almost directly opposite the Sun in the sky (something known as “opposition”).

Here’s NASA’s description of what’s seen in the shot:

All of Jupiter’s colorful cloud bands in this image are confined to the north and south by jet streams that remain constant, even when the bands change color. The bands are all separated by winds that can reach speeds of up to 400 miles (644 kilometers) per hour.

On the opposite side of the planet, the band of deep red color northeast of the Great Red Spot and the bright white band to the southeast of it become much fainter. The swirling filaments seen around the outer edge of the red superstorm are high-altitude clouds that are being pulled in and around it.

The Great Red Spot is a towering structure shaped like a wedding cake, whose upper haze layer extends more than 3 miles (5 kilometers) higher than clouds in other areas. The gigantic structure, with a diameter slightly larger than Earth’s, is a high-pressure wind system called an anticyclone that has been slowly downsizing since the 1800s. The reason for this change in size is still unknown.

The new portrait was captured as part of the Outer Planets Atmospheres Legacy (OPAL) program, which provides yearly global views of the outer planets in our solar system. The photos help astronomers study changes in things like storms, winds, and clouds.