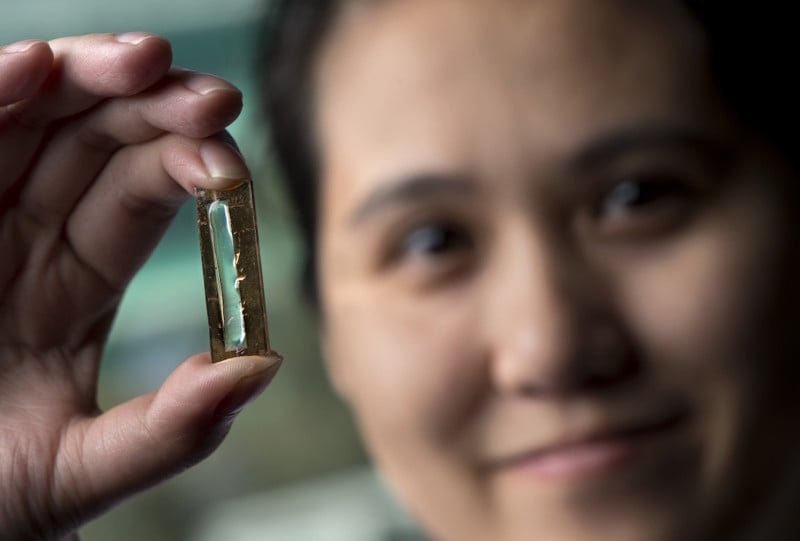 Photographers are slaves to their batteries—batteries for cameras, batteries for flashes, even the battery inside your smartphone with all its useful photography-related apps. That’s why this new, rechargeable battery breakthrough from some researchers at UC Irvine has us so excited.

The scientific breakthrough happened, as so many great ones have, by accident. UC Irvine PhD candidate Mya Le Thai was playing around with nanowire technology in the lab when she stumbled across what might be the biggest battery breakthrough in years.

Basically, scientists have been trying to use nanowires—filaments thousands of times thinner than a human hair—in batteries for years. Because they’re so thin the nanowires are incredibly efficient at conducting electricity. Unfortunately, they’re also extremely fragile, making them only good for a few thousand recharge cycles. That’s where Mya Le Thai’s breakthrough comes in.

She was apparently “playing around” in the lab when she coated a gold nanowire in a manganese dioxide shell and encased the whole thing in a Plexiglas-like gel electrolyte. This combination, it seems, somehow strengthens the nanowires and makes them many many times more resistant to failure.

“She discovered that just by using this gel, she could cycle it hundreds of thousands of times without losing any capacity,” explains Reginald Penner, chair of UCI’s chemistry department. “That was crazy, because these things typically die in dramatic fashion after 5,000 or 6,000 or 7,000 cycles at most.”

So how much more resilient was Le Thai’s creation? After putting her battery through 200,000 recharge cycles over the course of three months, the researchers still couldn’t detect “any loss of capacity or power.”

It’s anybody’s guess when (or if) this tech will make it into the batteries photographers use day in and day out, but the breakthrough could mean each of your rechargeable batteries will last a lifetime. No fading over time; no need to replace them.

To read the full research paper released by Le Thai and her colleagues, click here.

How to Renovate, Clean, and Paint a Kodak Brownie Hawkeye