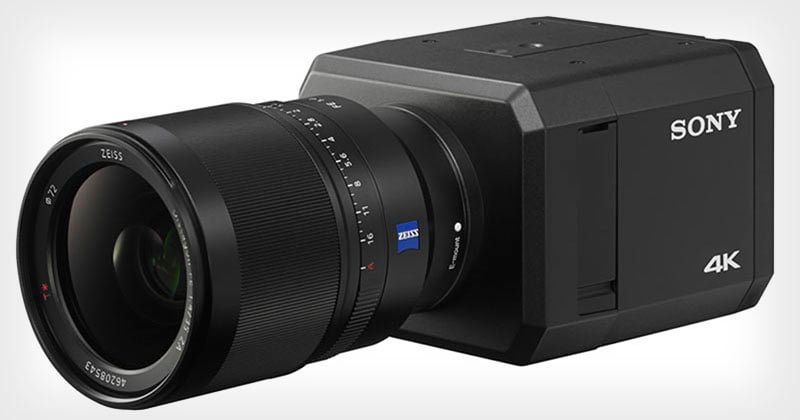 Sony just announced the SNC-VB770, a full-frame, E-mount camera with specs that may make photographers and videographers drool. Except it’s a surveillance camera.


On paper, the camera sounds a whole lot like Sony’s latest and greatest mirrorless cameras. Inside the SNC-VB770 is a full-frame Exmor CMOS sensor that can shoot 4K video and 12.2-megapixel photos. It’s also extremely sensitive in low light, capturing photos and videos in dark night conditions down to .004 lux (.002 is a moonless clear night sky).

The camera captures “clear color video at 30fps, even when the subject is almost invisible to the naked eye,” Sony says.

Based on those specs and capabilities, it sounds a whole lot like this security camera has the same sensor as the Sony a7S II, which has impressive low-light abilities.

On the front of the SNC-VB770 is an E-mount, which you can use to mount everything from an ordinary Sony E lens to the high-end Zeiss and new G lenses. In the product photo above, Sony shows a Zeiss 35mm f/1.4 lens mounted — it’s a lens that costs $1,600.

The smartphone can be controlled over Wi-Fi using a smartphone, and the 4K video feed can be cropped and arranged as 4 separate VGA (640 x 480) video images.

If you’re hoping to buy one of these cameras as a cheaper alternative to the Sony Alpha a7S II, you’re out of luck: the SNC-VB770 costs about $7,500 for the body only, and you’ll probably have a hard time finding one to buy as an ordinary consumer.

(via Sony via Engadget)