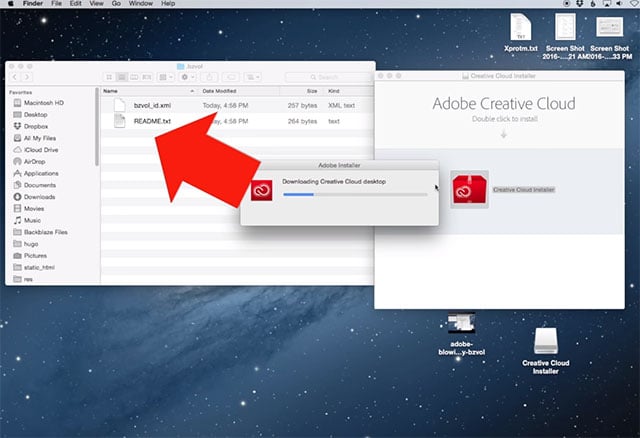 Here’s a major warning to those of you who use Adobe Creative Cloud on a Mac: the latest version of Creative Cloud has a bug that deletes unrelated data from your root directory without warning.

The bug in Adobe Creative Cloud version 3.5.0.206 was discovered by the cloud backup service Backblaze, whose customers were having their data deleted by Adobe’s app.

Here’s what’s going on: Creative Cloud appears to be deleting the contents of the 1st folder in your Mac’s root directory, in alphabetical order. For Backblaze customers, this folder was often the Backblaze directory called .bzvol. If you have a different folder that comes earlier alphabetically, something like .appdata, for example, then that folder will be affected.

This video released by Backblaze shows how an update or fresh install of Creative Cloud abruptly deletes all the contents of their hidden .bzvol folder:

But to show that this bug would affect non-Backblaze customers as well, the company did another test with a hidden folder named .adobedontkillme. The same deletion happened while signing in to Creative Cloud:

The issue also occurs when a non-hidden folder comes first alphabetically. Here’s Creative Cloud deleting the contents of a folder titled ‘ Adobe Precious Files‘ (a space was added in front to give alphabetical precedence):

Needless to say, this appears to be a critical bug that could have devastating affects if it silently and permanently deletes important data used by you or one or your Mac apps.

For now, Adobe has pulled the latest Creative Cloud update and is investigating the issue. If you’ve already downloaded Creative Cloud, there’s a simple trick that can protect you from this issue until a fixed update is released. You simply need to create a new hidden folder in your root directory that comes before everything else alphabetically.

Simply open your Terminal (in Utilities in Applications) and enter the following command to make the directory:

This fake folder will protect all your real ones from the havoc currently wreaked by the CC update. We’ve also reached out to Adobe for comment, and will update this post when new developments arise.

(via Backblaze via Ars Technica)

“We are aware that some customers have experienced this issue and we are investigating in order to resolve the matter as quickly as possible. We are stopping the distribution of the update until the issue has been resolved.”

Update: Adobe has issued an updated statement to PetaPixel:

“Yesterday we were notified that some customers had an issue with an update to the Creative Cloud Desktop application. We removed the update from distribution and deployed a new one which addresses the issue. For more information visit the link below.
http://blogs.adobe.com/adobecare/2016/02/12/creative-cloud-desktop-on-mac-update-issue/.”