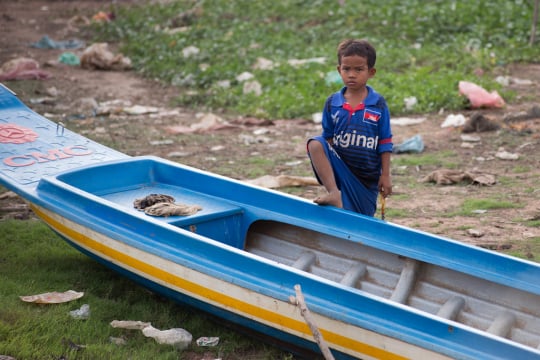 As children, we often assume different roles while re-enacting grand fantasies. All hail to Cesar, riding atop a palanquin, or to the astronaut floating above the world looking down at it. The doctor saving lives, or the war photographer documenting the rawness of the human condition and the horrors of society as it fails. Then, we grow up. We settle into our role within our socio-cultural strata and send subtle ripples across the fabric of the society that surrounds us.

As tourists, we recapture some of that wonder. We gain the opportunity to stand in the midst of the coliseum, to stride casually down the halls of grand empires and to snap photos of exotic peoples, destinations, and in some instances candid moments. These rich experiences add to the substance of who we are and let us get back in touch with the beautiful sense of exploration which defined our youth. They are, for many, what make travel wondrous, expansive and oh-so addictive.


But, what happens when that sense of exploration leads us to moments and experiences which carry with them a taint of exploitation or dehumanization? What happens when we suddenly become a modern incarnation of the aloof Roman dictator, well fed, wealthy, and separated by an invisible but nearly impenetrable wall from the people we’re visiting? It’s something that happens easily, innocently and far more often than we’d like to admit.

The Stirrings of Realization

For me, two instances stand out. The first tickled my awareness with a mild sense of intangible discomfort. The second brought clarity slamming into place combined, strangely, with a sense of helplessness. 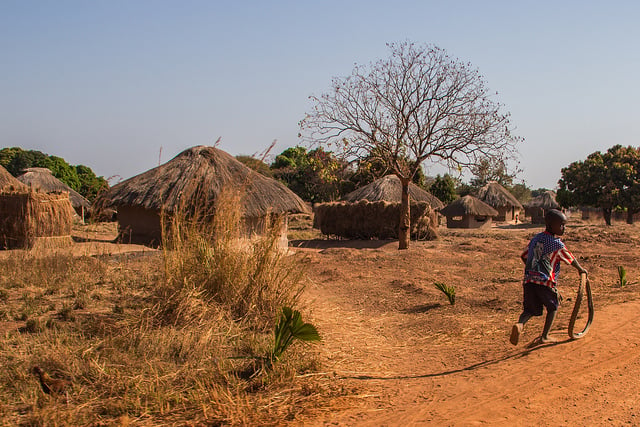 The first was during my time in Zambia. We’d elected to do a safari with a fantastic company in the South Luangwa region. They invest heavily in protecting the animals, a light footprint on the land, and in the local community. Yet, as we sat in the back of a large safari Landcruiser rolling along the pockmarked blacktop I looked out at the hundreds of locals that could readily be seen along the side of the road working their yards, walking the road, or going about their business. 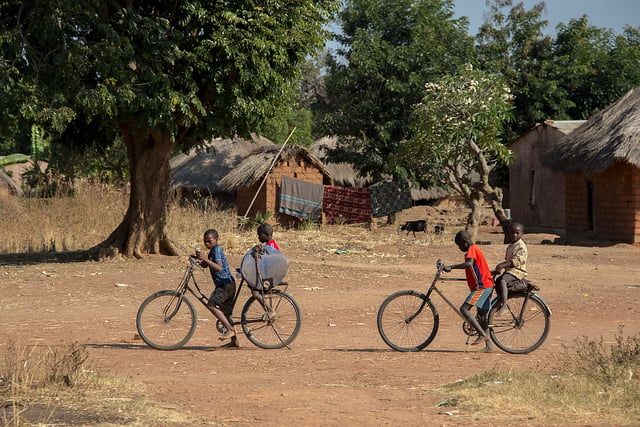 Often they’d look up at the four of us, often smiling, and in the case of the children, waving…then bursting into laughter when we’d smile and wave back. We stuck out like sore thumbs, and not just because of the color of our skin. It was nearly everything about us – from our clothing, to our glasses, camera, and the way we were traveling. Just as often as I waved back, I’d sit, camera raised to my eye, set in sports mode snapping away while watching the landscape race by through my extended zoom lens.

Each shot allowed me to capture a candid photo of daily life. And, if I’m to be honest, each shot was much more comfortable than had I been on the ground, walking from house to house, snapping photos. Just as fast as I snapped the photo or they looked up, the Landscruiser had spirited me away, erasing any possibility of a confrontation or interaction. 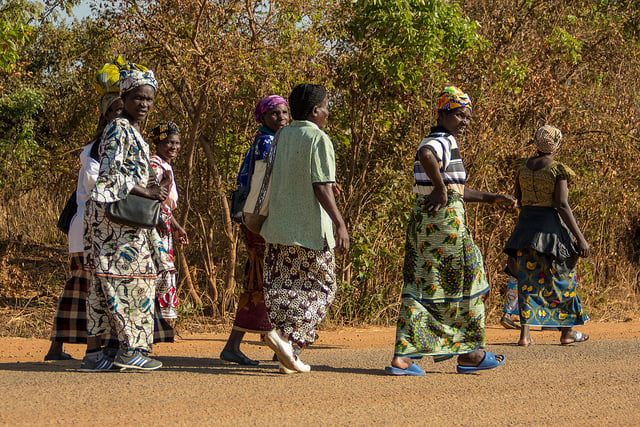 It was only as I sat in that same vehicle the following days, snapping photos in the same fashion of wildlife that I started to register the stark and uncomfortable similarities between the two situations. Somehow, without intending it, I had gone from great explorer on a grand exploration to dictator atop my palanquin utterly separated and detached from the local people who I was there to meet.

True, I was there, but in this instance it would be far more accurate to say I was in actuality just seeing them, not truly meeting them.

More recently I once again found myself in a region of the developing world – this time just outside Siem Reap in northern Cambodia. While Siem Reap has exploded over the last few years due to a huge surge in tourism visiting the ruins at Angkor Wat, the surrounding area remains profoundly poor and still struggling to recover from decades of war and disastrous policies.

Beyond the trip to Angkor Wat, there are two other common day-trips from Siem Reap. One to a floating village, the other to a small village that sits in the river’s flood plane and where all of the houses are built atop large pillars. 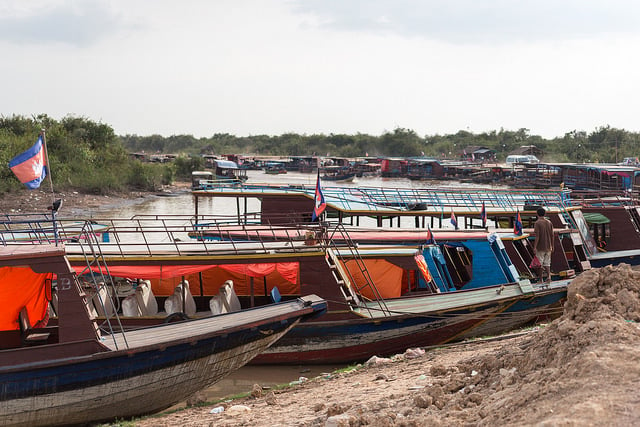 Eager to get shots of a floating village on pillars and searching for that classic shot of floating vendors I booked a small tour. As it turned out, there are more than 100 tour boats registered with an average capacity of 12-30 people. They sit docked up the river from the village, ready to ferry tourists down through the midst of the village, out onto Tonle Sap – the massive lake in the heart of the country – and then back to waiting vans at dusk. 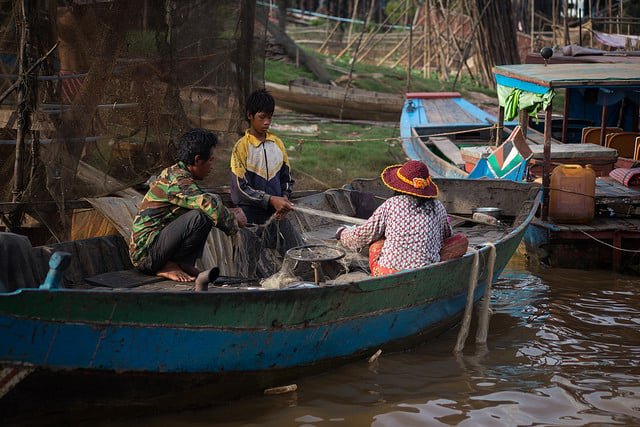 Though there were not nearly enough tourists for the number of boats on hand and most of the boats remained moored in the staging area, ours still managed to drift into another boat, and full on collide bow to bow with a second tour boat, sending splinters raining into the water. 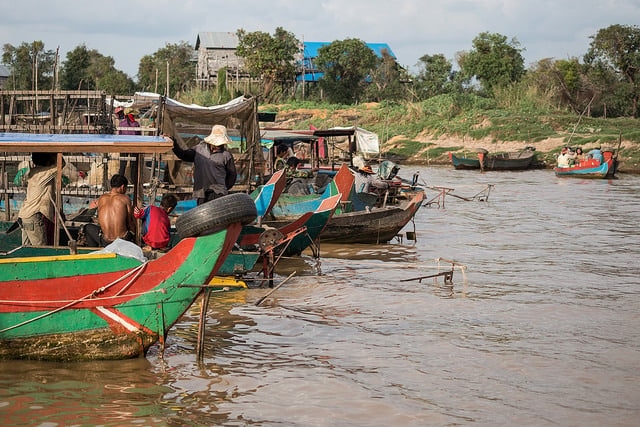 As we slowly made our way down the narrow waterway, constricted by the summer’s particularly harsh drought, the locals in their fishing craft dodged us, used to it and tolerating our presence. We sat in the boat, the sound of digital cameras recording moments and memories as we went, while I sat on the boat’s roof shooting burst after burst of photos.

Again, camera set for action and motion with a long lens affixed. Once again the children would look at us, smile and wave. An adoration for life and rich warmth visible in their eyes that conveys and teaches you more about life than any self-help book or life-coach. 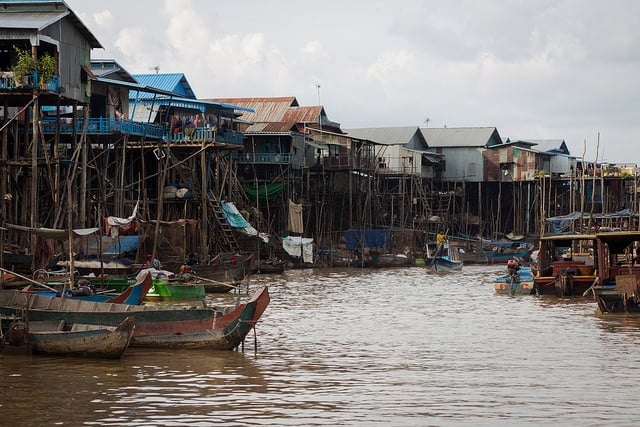 And at the same time, I realized that once again it had happened. We sat atop our vehicle, motoring through the midst of their home, immersed and exploring their daily lives but simultaneously utterly detached and apart. 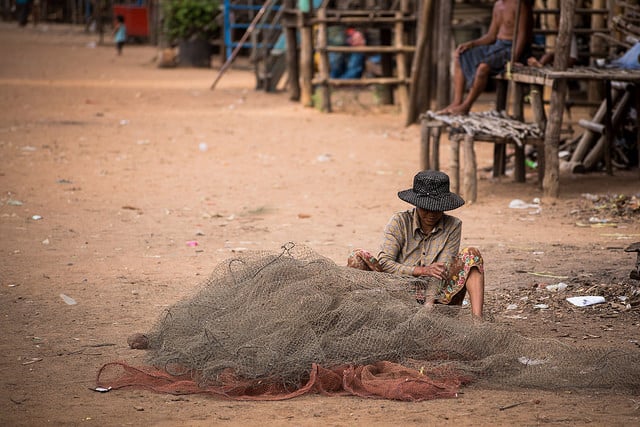 Later we docked, departed the boat and were walked down the central street. It was an incredible and rich insight into their lives, but it was clear that short of a few women who mobbed us when we arrived trying to sell us pens, notebooks, and papers “for the school”, they tolerated our cameras, our presence and our detached ogling while we stood apart and detached. There but fundamentally apart and separate.

A 10 minute walk through the heart of the town, during which I tried to learn from our guide if the women were actually collecting resources for the school, or if it was a scam, and if any of our tour money came back to the village (he was evasive on both topics) and we were back on the boat. 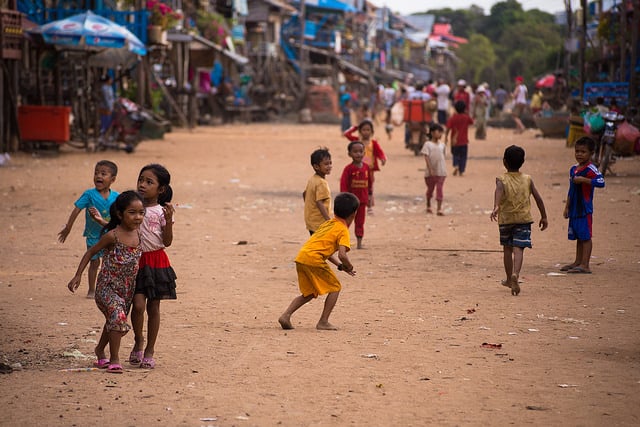 As I sat watching the sun set I couldn’t help but accept the reality of what had just happened. I’d visited a village which tourism had essentially turned into a human zoo. In my attempt to explore, connect with, understand, and capture a better understanding of a local community I’d also stood apart, fundamentally taking lessons, learnings, experiences and my own biased depiction of their daily lives and community which bore the weight of my interest, but who gained little, if anything from my visit in return.

The money for my tour no doubt went to the owner of the tour group, based, if I was lucky, in Siem Reap and not some other region or country. The guides got paid and showed the locals some level of respect and comradery, but were not locals. I’d paid $20 for my tour. The average annual income in Cambodia is roughly $950 a year. The minimum wage in most of their urban industries is close to $80 per month…and in rural fishing communities like this? Who can say, but likely far less than that. 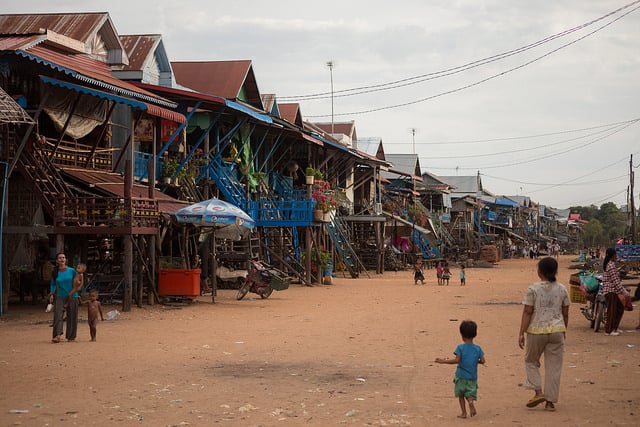 Today it’s so easy to look at the freakshows and human exhibits that were common place in zoos and circuses 150 years ago with disbelief and disdain. And yet, was what I’d just done that much different? In practice, yes, but in spirit? It’s a challenging quandary, and one I’m still coming to terms with.

It’s also no simple or clear cut thing. When do we cross from simply observing and exploiting to participating and immersing? Is it when we give back to the community? When we have a conversation with a local? When we share food? Does it make the photos I captured somehow tainted or deceptive? 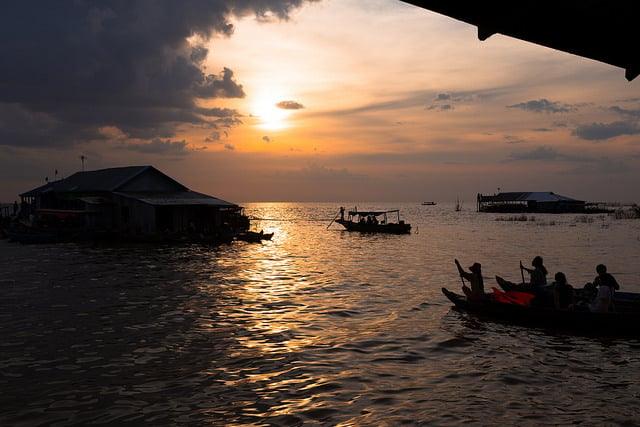 And, did I ever connect with the locals? Absolutely. Both in Zambia and in Cambodia, I shared incredible meals, moments, and conversations with locals who taught me important lessons about life, warmth and hospitality. I do not feel as though I was a cultural stripminer, who came, took, and then left without giving back in return. But, I also know that I contributed to a complex problem and that in the future I’ll be more aware.

Even if these experiences and situations are a semi-necessary part of the tourist experience, I can contribute in my own way to changing how I relate to and experience these situations, especially as a photographer. Ultimately, the richest experiences occur when we descend from the palanquin, accept that we come from very different means, and then work to bridge those gaps.

As my parents always reminded me, we are our brother’s brother, not our brother’s keeper and I think it becomes an essential part of how we experience the world when we travel.

About the author: Alex Berger is a travel photographer and writer based in Copenhagen, Denmark. You can find more of his work and writing on his website, VirtualWayfarer, and on Flickr. This article was also published here.