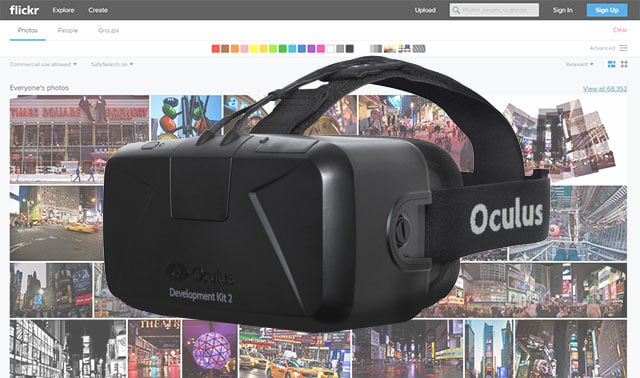 Virtual reality is one of the trending technologies that tech companies are pouring vast amounts of time and research into, and one company that wants in is Flickr. The photo sharing company is working on a virtual reality photo viewing experience that may be integrated into its service in the future.

Engadget reports that Flickr was showing off a special VR demo at the XOXO Festival in Portland, Oregon, last weekend. It was a photo viewing station powered by an Oculus Development Kit 2 headset:

Put the headset on, and you’re immersed in a 360-degree panoramic photo that lets you look in every direction to take in the complete scene. To move on to the next photo in the slideshow, simply look down at a pair of Flickr-colored blue and pink balls for a few seconds.

Flickr has only been working on this technology for a few weeks, Flickr engineer (and project lead) Bertrand Fan tells Engadget. The plan right now is for 360-degree photo pages to have a special button for VR headset viewing (with support additional headsets besides Oculus, as well).

But that’s not all: what’s even more exciting is how VR technology could be used for browsing through photo collections. Fan tells Engadget that one day, it may be possible “to browse through your library and even organize your photos into albums just by waving your hands, Minority Report-style.”

In terms of time frame, Fan is hoping to launch some sort of Flickr virtual reality functionality to the general public in early 2016.