Last month, we shared a glimpse into the intense gym workouts of renowned adventure photographer Jimmy Chin, who constantly trains his body for his next extreme shoot when he’s between assignments. If you’d like to see what those workouts are for, check out this new 5-minute feature by VICE Sports. 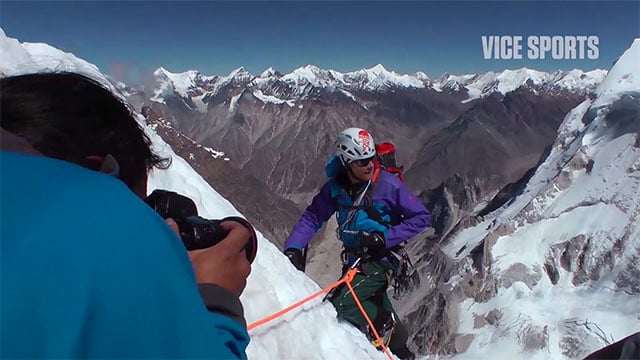 “Jimmy Chin has accomplished it all in the world of action sports and he’s had a camera in his hands the whole time,” VICE writes. “From skiing Everest to climbing some of the world’s largest peaks, he has made a career of taking on incredible expeditions while documenting them through photos and videos.”

“His unique expertise across various disciplines has led him to capturing moments that quite literally no one else on Earth could.”

Chin’s new feature film, “Meru,” is just hitting theaters. It’s the story of his attempt at scaling Shark’s Fin on India’s Mount Meru — considered by mountaineers to be one of the hardest climbing routes in the world. Here’s the trailer:

In 2011, Chin and two other climbers became the first team ever to climb Meru via the Shark’s Fin after a 12-day climb. You can find more of Chin’s photography on his website.

Glitterbombs of Truth for Photographers