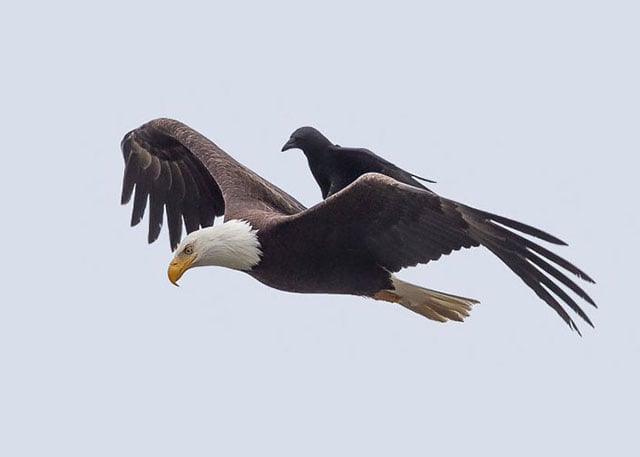 Capturing animals riding other animals seems to be a new trend in wildlife photography. First there was a weasel riding a woodpecker. Next was a raccoon riding an alligator. The latest: this photo of a crow hitching a ride on the back of a bald eagle.

It was shot by California-based amateur photographer Phoo Chan, who watched the image go viral online over the past several days.

“Crows are known for aggressively harassing other raptors that are much bigger in size when spotted in their territories and usually these ‘intruders’ simply retreat without much fuss,” Chan writes. “However, in this frame the crow did not seem to harass the bald eagle at such close proximity and neither did the bald eagle seem to mind the crow’s presence invading its personal space.”

“What made it even more bizarre was that the crow even made a brief stop on the back of the eagle as if it was taking a free scenic ride and the eagle simply obliged.”

Here’s a sequence of photos that were captured immediately before the shot above, snapped with a Canon 1D X, Canon 600mm II lens, and a Canon 1.4x III extender. 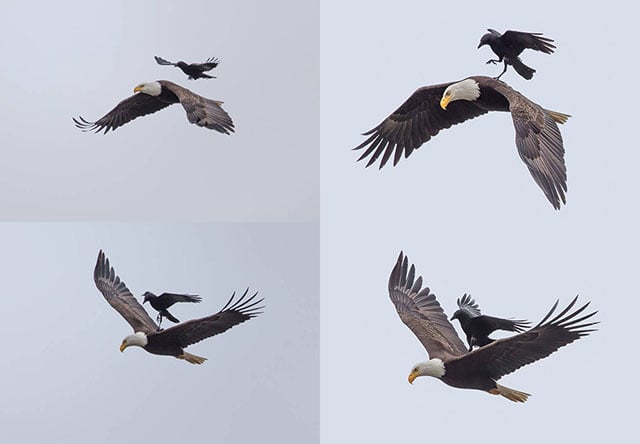 You can find more of Chan’s wildlife photography on his 500px and Flickr pages.

(via Bored Panda via Colossal)

Image credits: Photographs by Phoo Chan and used with permission

Standing Up for the Concert Photographer… By Standing on Their Neck