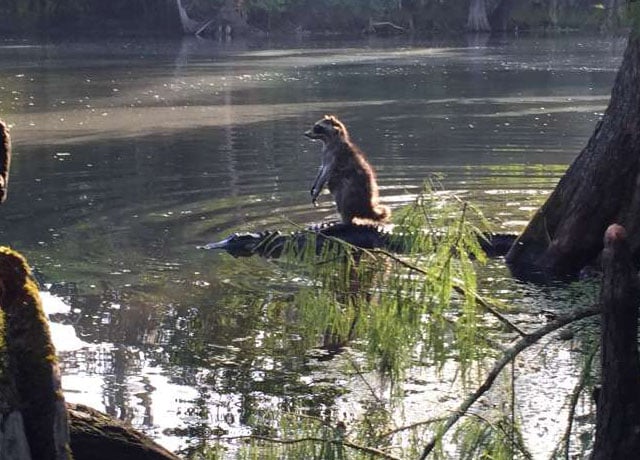 Remember that photo of a weasel riding on a woodpeckers back that went viral earlier this year? A similarly strange wildlife shot has emerged, and this one is making the rounds on the Web as well. It’s a bizarre photo of a raccoon riding on the back of an alligator in a river.


The Florida Times-Union reports that the picture was captured this weekend by a man named Richard Jones who was exploring the Oklawaha River in central Florida with his family. Jones’ son made a sound that spooked the raccoon, causing it to hop onto the alligator.

“My son went through some palm fronds to catch a different angle and frightened a raccoon. It must have been asleep because it stumbled toward the water and hoped on top of the gator we were watching,” Jones says. “I snapped a lucky picture right when the gator slipped into the water and before the raccoon jumped off and scurried away.”

Jones says the shot is “definitely the photo of a lifetime.” The raccoon may not have been hitching a ride across the water, but it’s still an unusual wildlife shot that’s headed toward Internet fame.