Photographer Phoo Chan was shooting in Coyote Hills Regional Park in Fremont, California, recently when he spotted hawks doing food exchanges in midair. The photo above is a 5-shot composite showing a male Northern Harrier passing a small bird it caught to one of its three offspring.

Here’s a crop of the image (you can see a higher-res shot here):

Chan also captured this photo of a male Northern Harrier dropping a freshly caught squirrel to one of its mates: 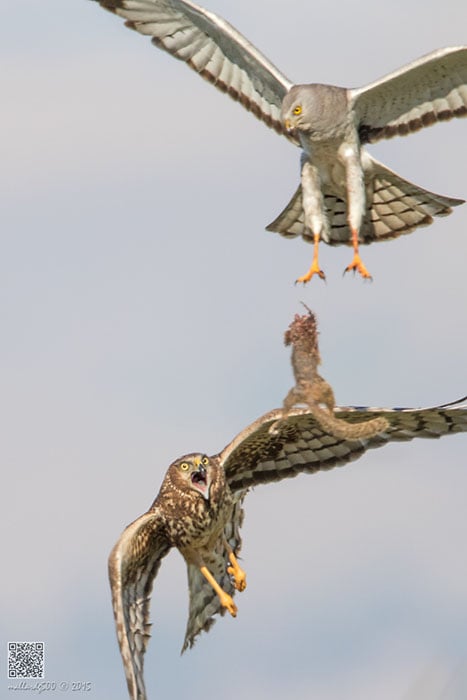 The photo was shot using a Canon 7D Mark II with a Canon 600mm on a 2x teleconverter. The effective focal length was 1920mm, which “too much of a reach when the subjects are too close,” Chan says.

He writes that male Northern Harriers can have as many as five mates at once, and since the males are the main meat-winners in the “families,” they’re constantly busy trying to provide for their mates and offspring.

By the way, Chan is the same photographer that snapped that photo of a crow riding a bald eagle earlier this month.

Image credits: Photographs by Phoo Chan and used with permission