OK, I have to admit I really like the 7D Mark II. I didn’t want to because it wasn’t what I wanted. I wanted to see the new Canon chip foundry that would be cranking out high-resolution sensors. But despite wanting to hate the 22-megapixel APS-C camera, after a fairly short exposure to the autofocus system, I have to admit I like it. There’s just something about getting every shot in focus every time that’s appealing to me.

So when I read the claim ’4 times more weather sealing’ my inner cynic just thought 4 times zero equals zero. But I wanted to be fair so I decided I’d open up the 7D II before I wrote a scathing article about making ridiculous weather sealing claims. Which results in me once again writing an article where I have to admit my assumptions were less correct than I would have liked. (Sorry, I forgot for a moment this was the Internet where no one ever says ‘I was wrong’.)

For those who want to take my word for it and skip on to some other blog, the Canon 7D Mk II may be the best weather-sealed camera I’ve run across. It’s excellent. For those who would rather see for themselves, gory camera dissection pictures follow!!

I’ll add, because someone always wants to comment about the poor quality of my dissection photos, that you’re welcome to try shooting with one hand while taking two cameras apart with the other hand under 4 tungsten hot-lights, making sure you have the camera back together by the end of your lunch break. We don’t do high-quality product photos back in the repair department. But better this way than if we let the product photo people try to take the cameras apart.

On to Some Dissection

The backs come off the cameras almost identically, but once they are off we start to see some differences.

The first thing we noticed were thick, flexible rubber gaskets (red arrows) sealing the back of the 7DII that aren’t there on the 7D. 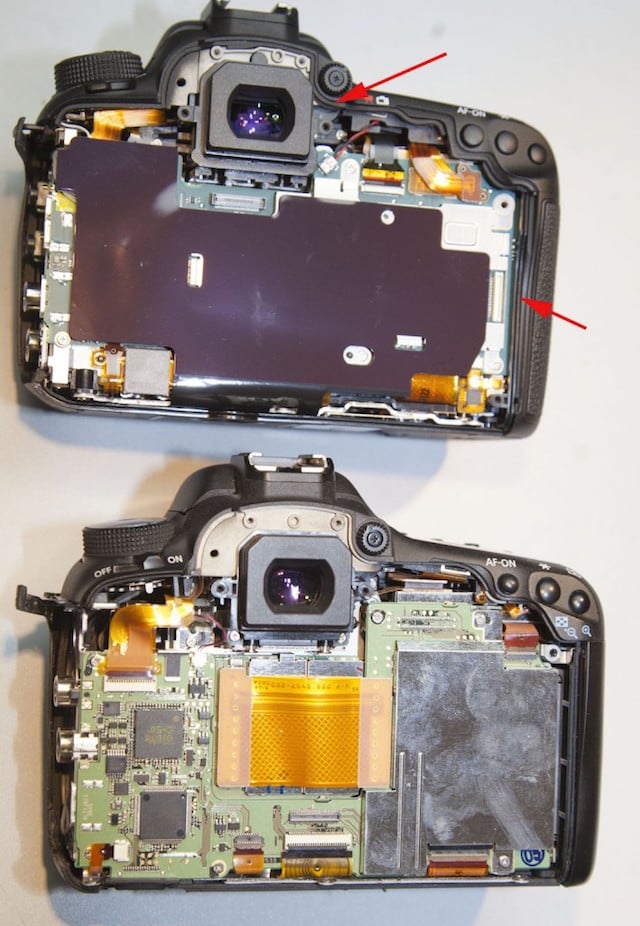 The side panels (where the accessory connections live) look very similar at first glance. 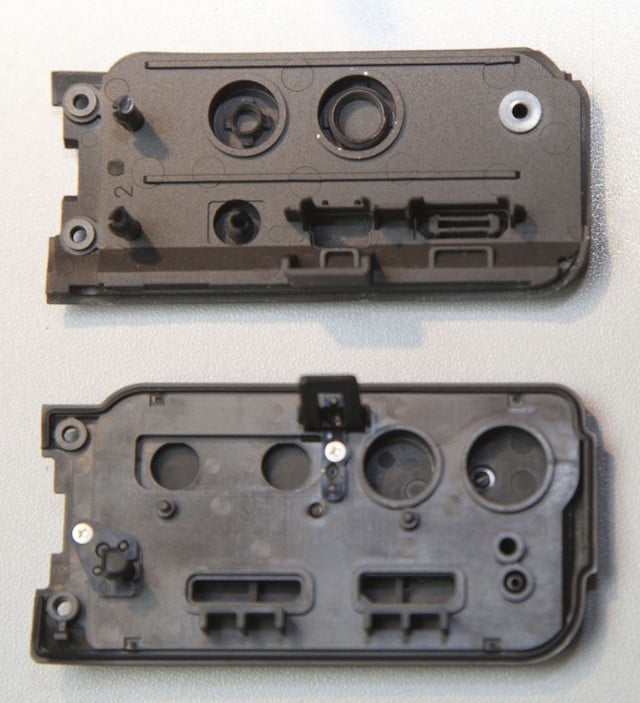 But only the 7D II has rubber gaskets around the edges. 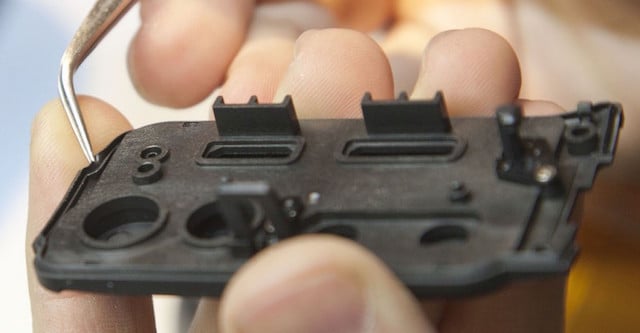 A Bit of Non-Weather Sealing Stuff

Let’s leave the weather sealing for a second. Looking at the back assemblies shows a minor change most of you won’t care about. If you own a rental shop, though, you really would care about it. There’s been some strong bracing (green lines) placed around the LCD on the 7D Mk II that aren’t there on the 7D (or the 5D series either).

One problem with the 7D was that you could push the LCD hard enough with your thumb to make it sink into the camera a couple of millimeters. It required disassembling the back to put the LCD back in place. It’s nice to see the issue addressed even though it was a minor problem. While we’re looking at the back, though, you can see that the 7D II has thick gaskets around the viewfinder (red arrows), which weren’t there on the 7D.

If you look at the back of the camera there’s another thick gasket around the viewfinder, which makes this area doubly sealed! 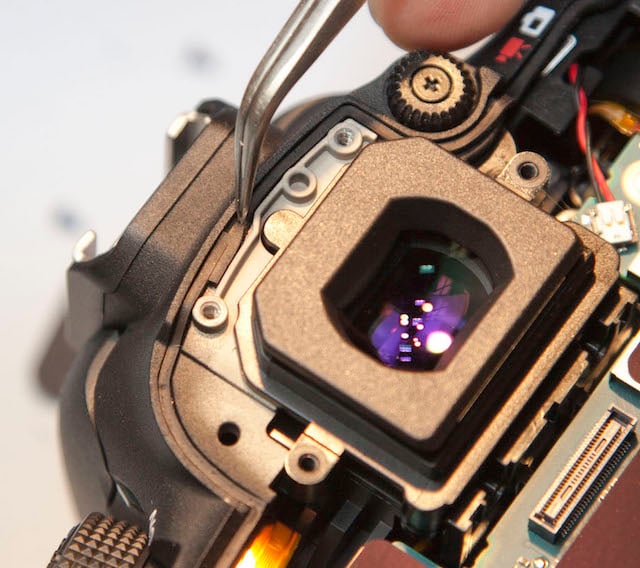 After removing the shielding from the backs, it’s obvious the chip sets are completely different.

Obviously, the big jumper flex that crosses the circuit board in the 7D is gone with the 7D II. We sort of hated losing that jumper flex in the center of the camera because we thought it was kind of pretty. But the new camera has an exceptionally cool flex in the bottom right corner that Aaron has named the argyle flex. It’s not quite as cool as the jumper flex, but it does somewhat make up for the esthetic loss. OK, camera geek turned off.

For those among you who intend to double-check our results by disassembling your own 7D II, I will help you out by showing you the location of the official Canon-hidden-circuit-board screw. There’s one of these in every camera, I assume to keep some untrained person like me from removing the PCB. 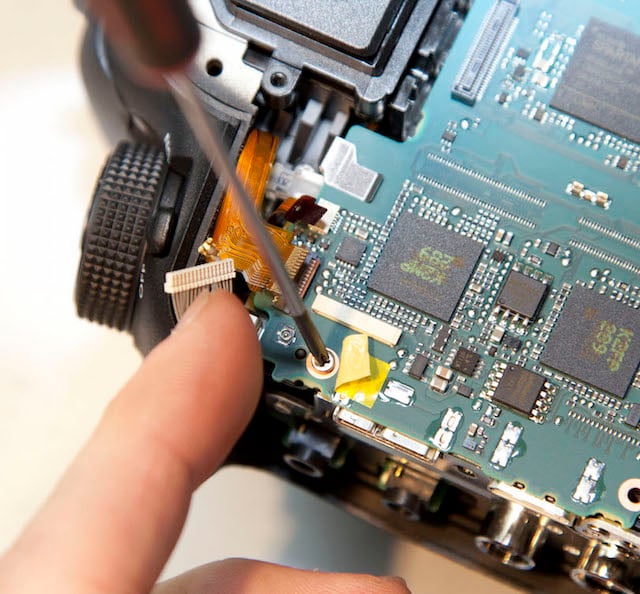 Before we get back to looking at seals, I’ll show you one other thing I really like. There’s a small fiberoptic cable in the 7D that tends to slip out of its holder on the circuit board (if you take things apart, not from just using the camera). It’s held by the forceps in the picture below, with the red arrow pointing to it and the small white plastic slot it slides into (and out of). 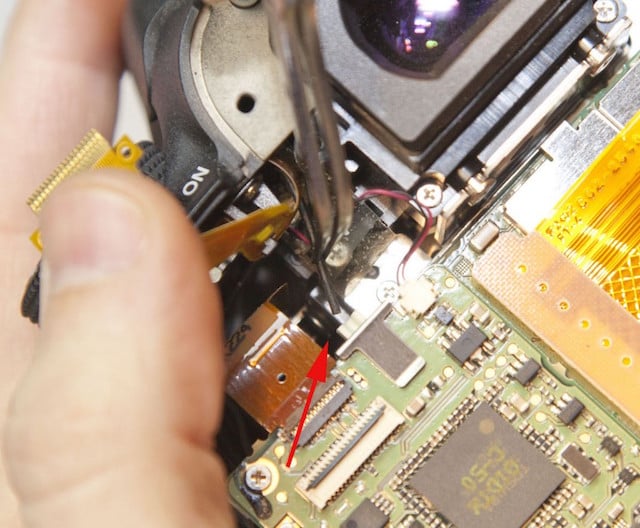 The 7D Mk II has a much more robust snap-in connector. Another minor, but significant to me, improvement. 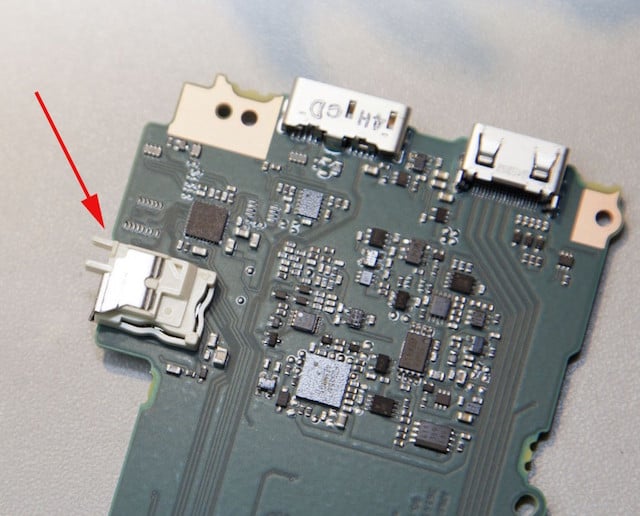 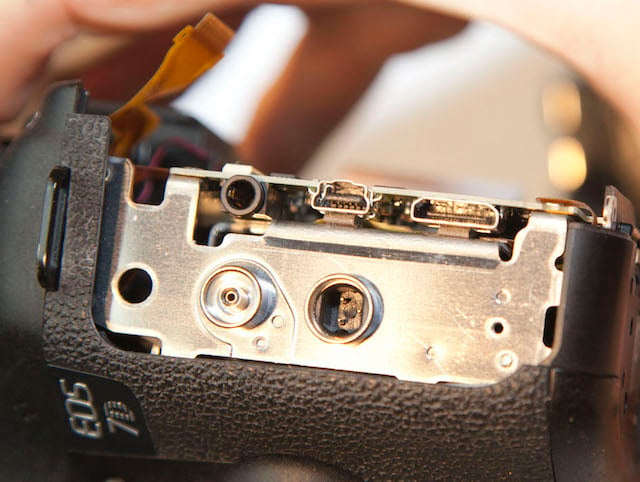 One more thing about the internals, then we’ll go back to our regularly scheduled programming. A quick glance at the deep boards shows the CF card slot is on its own circuit board (the SD card is part of the main board). This is important because CF pins bend or break sometimes. Having a separate board makes replacement easier when that happens. 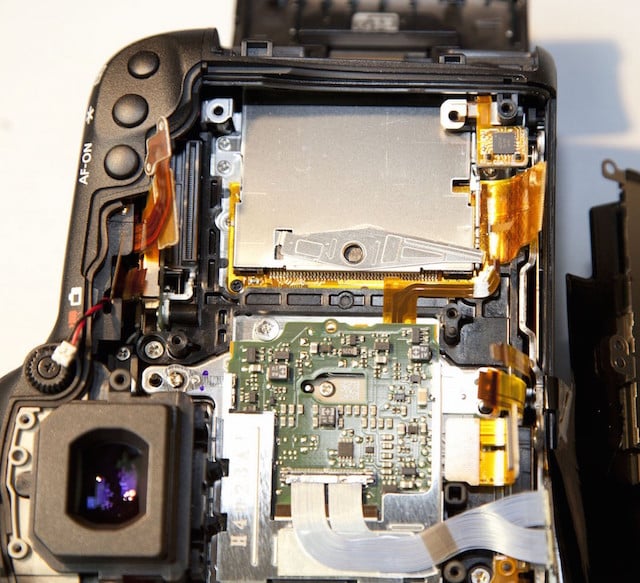 This was Supposed to be about Weather Sealing, Wasn’t It?

Oh, yeah. Well, there’s plenty more of that to show you. The bottom plate of the camera has another gasket around the edges. 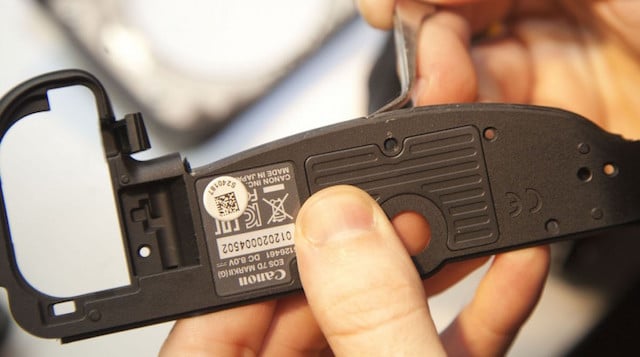 And there’s even an internal one around the tripod mount. (Just to stop repeating myself, none of these were present in the original 7D.) 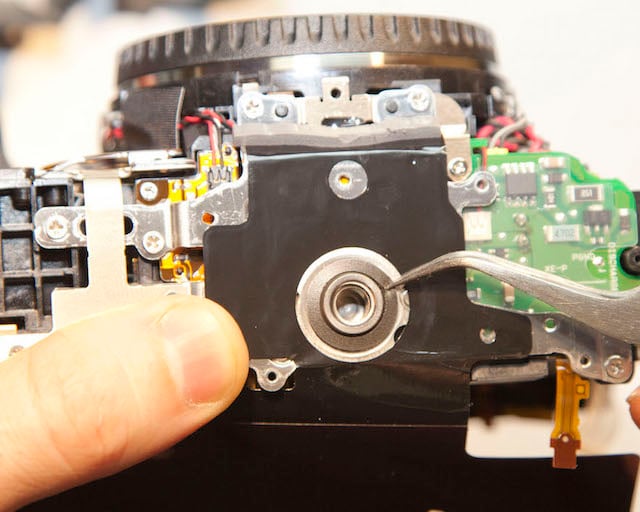 The front plate has gaskets around every edge (red arrows). 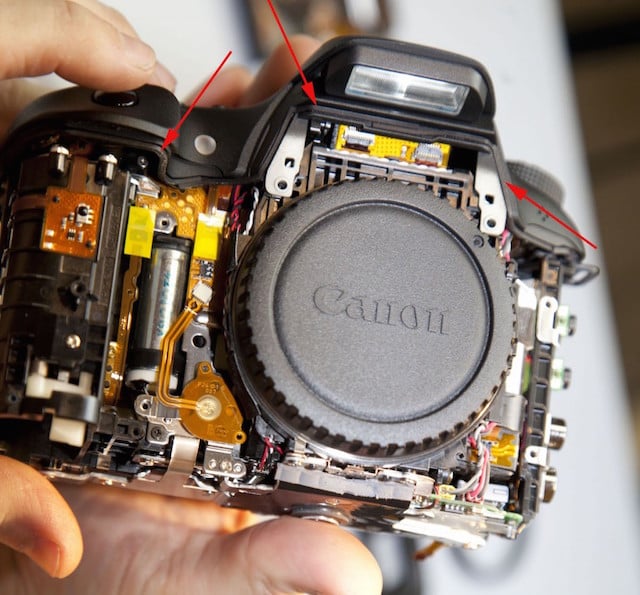 And on the outside of the camera body plates, under the grips, most of the joints are sealed with waterproof tape. 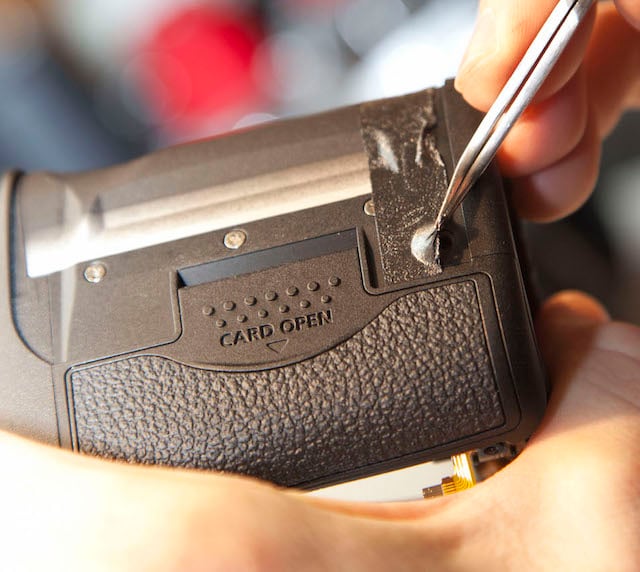 Of course, there are gaskets around the top assembly. 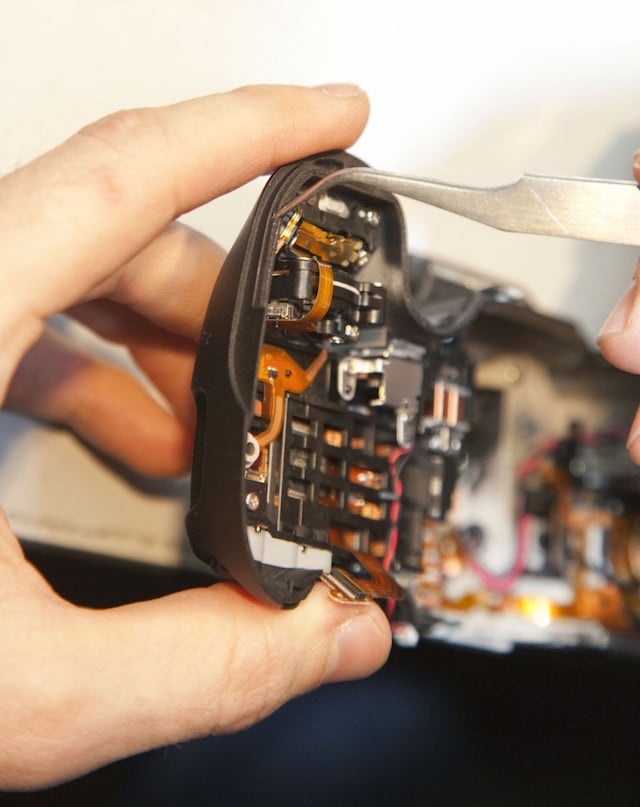 Heck, there’s even a gasket around the diopter adjusting knob, something I’ve never seen before. 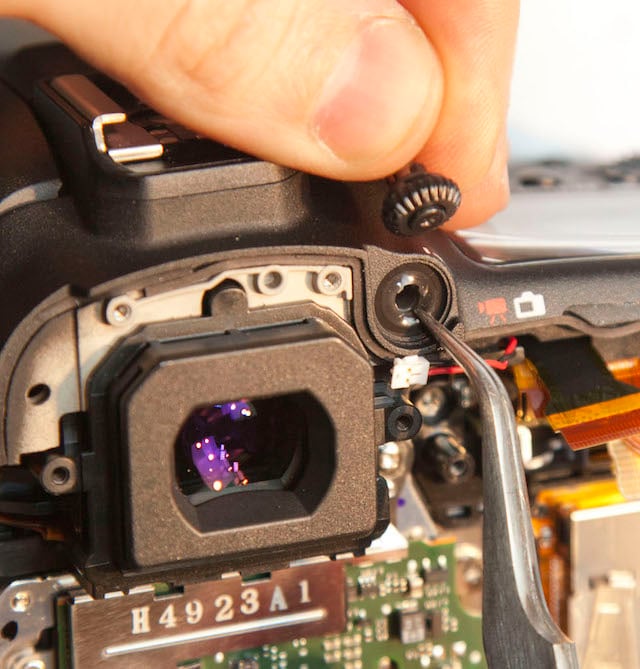 So there you have it. This is, by dissection at least, the most thoroughly weather-sealed camera I’ve ever run across. (I would point out that I don’t take apart every camera so please don’t change my wording to say it’s the most weather sealed camera. I don’t know that.) But this isn’t just market-speak weather sealing. It’s a thorough and complete attempt to seal every possible crack and crevice the camera has.

And yes, I know what you’re going to ask. Will I stick it under running water and see if it still works? I really think it would be fine. But I’ve already been wrong with one assumption today, so I don’t want to push my luck. Besides, it’s not my camera.

Into Eternity: A Poignant Black & White Time-Lapse Dedicated to a Man Who Took His Life