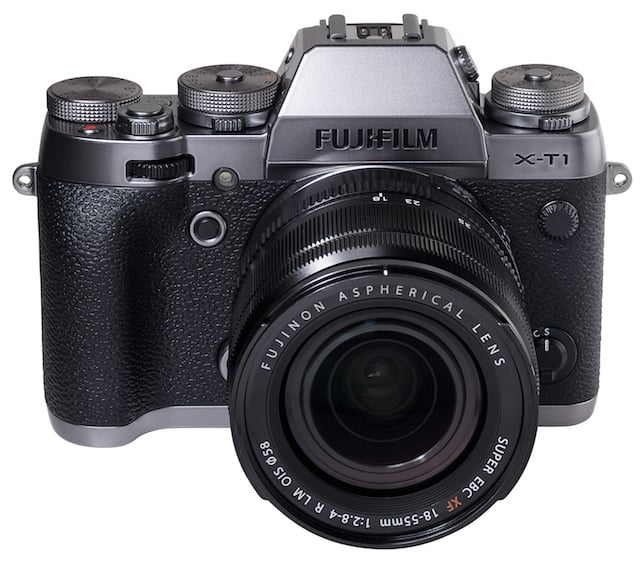 The X100T is far from the only announcement Fuji decided to make today. In addition to revealing the brand new fixed lens camera, the company is also pulling the cover off of a special ‘graphite silver edition’ of the powerful X-T1 camera, and adding two more lenses to its XF lineup.

[The Graphite Silver Edition] features a triple layer coating to give it a unique and durable fit and finish. Following an antioxidant treatment on the magnesium body, a matte black undercoat (primer) is applied to the X-T1 as a first coat… Then, the X-T1 body is rotated at a high speed while thin coats of ultra-fine paint particles are layered using a computer controlled “Thin-film Multilayer Coating Technology” for a smooth and luxurious Graphite Silver finish.

Finally, the X-T1 is given a clear coat for extra durability and a deep gloss finish that subtly changes its appearance depending on how it is struck by the light. To be fair, however, the finish isn’t the only thing that sets this camera apart. That ‘Classic Chrome’ film simulation mode we told you about with the X100T has been added, the electronic shutter can now go as high as 1/32,000 of a second, and Natural Live View mode will mimic an OVF and “display images just as the eye sees them.”

This beautiful special edition will arrive in late November for the same price as the all-black X-T1, that being $1,500. You can, of course, already pre-order it from B&H Photo by clicking here.

On to the glass. One new lens and one more-bokehlicious version of a current lens were also announced today: the weather-resistant, optically stabilized 50-140mm f/2.8; and the APD version of the 56mm f/1.2. Housing 23 elements in 16 groups, the lens also boasts weather sealing that makes it dust resistant and capable of working in temps as low as 17°F, built-in image stabilization, and the “world’s first Triple Linear Motor for fast and quiet autofocusing and shooting.”

Interested parties can pick it up in December for $1,600, or pre-order it now from B&H Photo. The 56mm f/1.2 R APD, unlike the lens above, is just an alternate version of an existing lens. Made up of the same 11 elements in 8 groups as the regular 56mm f/1.2 R, the differentiator here is the apodization filter attached to the very front.

Without getting into the optics of it all, this should keep in-focus areas just as sharp as before, while making out-of-focus areas even more pleasing. This, obviously, is being targeted at portrait photographers with a deep appreciation of creamy bokeh, but it will cost you a whopping $500 more than the regular version, so that appreciation better run deep.