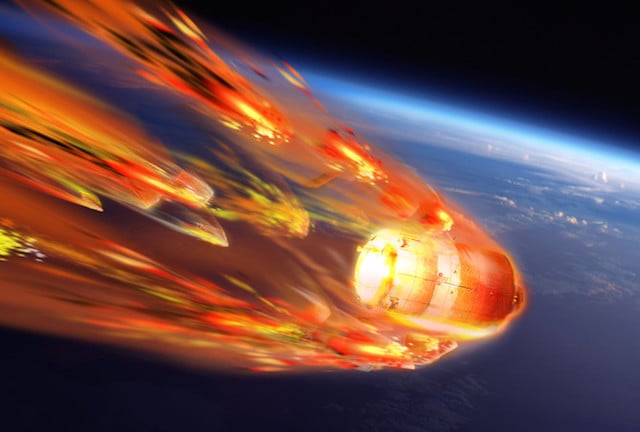 The European Space Agency has designed a disposable piece of equipment affectionately referred to as the Break Up Camera. As you could expect from the name, the sole purpose of the camera is to capture it’s own death.

How will it capture its own death though? With the help of a dedicated Infrared camera, hooked up to a storage device that will be contained in a ceramic-shielded Reentry SatCom.

After the agency’s ATV–5 (Automated Transfer Vehicle) resupply ship takes its final journey to the space station, it will then make its way back into Earth’s atmosphere, carrying this Break Up Camera in its belly. Once the ATV–5 vehicle breaks up upon entry, the SatCom will immediately begin the recording and transferring of footage from the onboard infrared camera – not an easy task when falling at over 15,000 miles per hour.

So difficult, in fact, that the ESA says they face the issue of “the blackout effect of the blowtorch-like ‘plasma’ of electrically charged gases enveloping reentering objects.” This means that the SatCom needed to be specifically designed with a special antenna to ensure transmission would be possible at approximately Mach 19. The recording and transmission of the captured video will begin as soon as the device reaches a predetermined speed, as measured by an onboard accelerometer.

The resulting footage should be about as interesting as it gets. So, today, we commend you, Break Up Camera, for your brave endeavors to sacrifice your life for the sake of knowledge…and an inevitably awesome YouTube video.

Photographer Photographs Two Mimes in 1974, Only Realizes 35 Years Later that One Was Robin Williams