Four years after initially covering the incredible journey of photographer Kirsty Mitchell’s Wonderland series, we’re here to present to you with another page of what Mitchell is calling Wonderland’s final chapter, in the form of the behind the scenes of ‘The Stars Of Spring Will Carry You Home.’

Each image in the Wonderland series holds a deeper, more intricate story. None are ‘just photos,’ and if you’ve read any of Mitchell’s ‘diary’ entries you’ll understand this. But this particular photo goes even deeper.

Captured back in the summer of 2013, the photo sat dormant on Mitchell’s computer, untouched from the day she offloaded the memory card. It wasn’t until the last week in February — nine months after initially capturing it and after FX Media had finished the BTS production — that Mitchell opened up the image to work on it.

But just a week after opening up the files from the shoot, Mitchell and her husband received the news that their friend, John Clarke, had passed away from a motorcycle accident. From Mitchell’s blog post that accompanies this image:

My husband had seen him just 2 weeks before, when John had talked of moving out of London to the countryside to be nearer to us with his girlfriend Samira. His life had changed so much in the last year, he had found love, happiness and purpose within himself, and I cannot begin to explain the extent of his warmth and kindness as a human being; in short everyone loved John. So once again [referring to how this project initially started as a tribute to her mother’s passing] throwing myself into work and pouring everything I have into the pixels before me became the only way I could make sense of things and somehow try to honour his memory.

Mitchell goes on to share in further detail how, as she was working on the photograph, it became more and more apparent just how intertwined the image was with everything that was Wonderland and the motivation behind it:

The coincidence of the picture’s original narrative still takes my breath away, and for that reason I feel I can dedicate it to John’s memory in the most genuine and heart felt way. I have named it ‘The Stars Of Spring Will Carry You Home’ . Part of the title I took from an Epic45 song that for me will always represent love, and secondly for both John and Katie they were now set on their path home, returning to where they came from. It is about strength, and the merging of flesh with nature….. completing the circle of energy I feel we are all a part of. 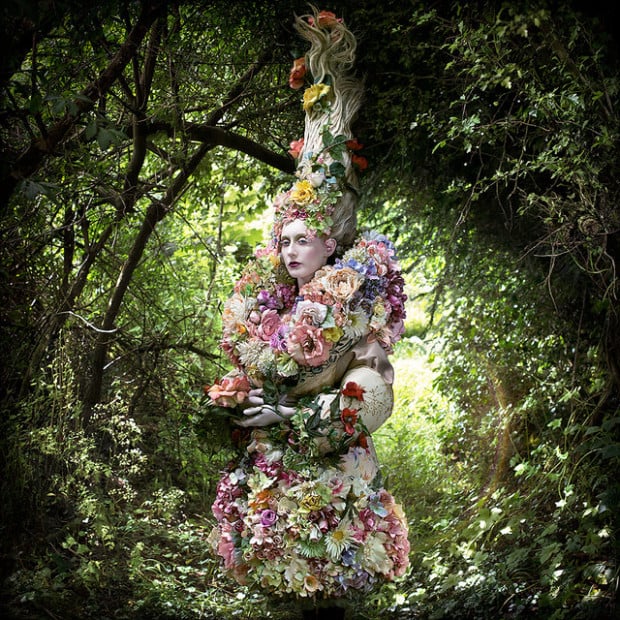 As you can see in the final image above, it’s a powerful addition to an incredible series. An image that is, perhaps, best summed up by an Aboriginal proverb and one of Clarke’s favorite quotes, “We are all visitors to this time, this place. We are just passing through. Our purpose here is to observe, to learn, to grow, to love… and then we return home.”

For those who haven’t seen our previous coverage of Wonderland, you can do so here and here. And don’t forget to visit Mitchell’s blog to read the full story for yourself.