We first shared the jaw-dropping fairytale photographs that make up Kirsty Mitchell‘s Wonderland series in May of 2012, some three years after she began her journey and just as her work was going so viral online that her reply to our request to feature her work was a “yes” followed by a “thank goodness I upgraded my servers!”

Now, four and a half years after she began Wonderland as a tribute to her mother who had recently passed away, she has officially embarked on what she is calling the final chapter in her Wonderland series.

Although the series hasn’t ended, the photograph you see her taking in the above video — which was put together by FX Media — is the “beginning of the end” so to speak. Appropriately, it is titled “Gaia, The Birth Of An End.”

We share this with you for two reasons: first, if you’ve never seen the Wonderland series you are in for a photographic treat that is ridiculously hard (if not impossible) to beat. And second, this is the first we’ve had an opportunity to take you behind the scenes of one of Kirsty’s Shoots.

Here’s a look at the final shot: 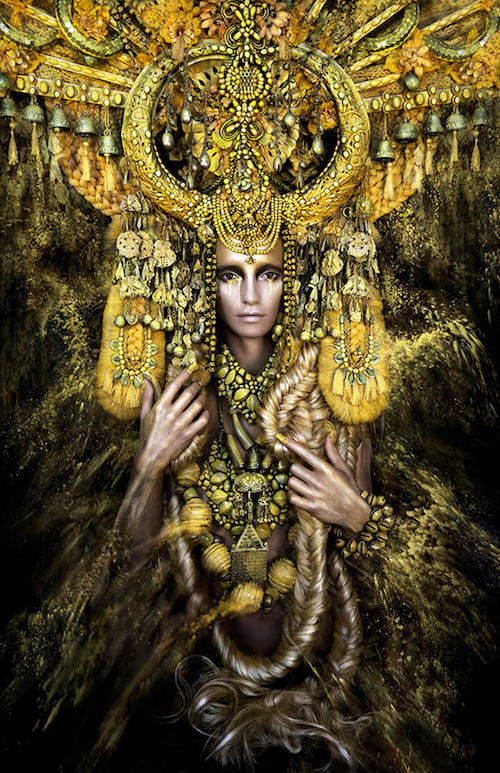 Truth be told we could we could wax eloquent for paragraphs on end about how amazing Mitchell’s work is and how intricate and all around stunning this particular piece is. But there’s no need, as she has already done it for us. In a detailed BTS blog post that went live with this video she explains the meaning behind the photo:

I named this first portrait ‘Gaia, The Birth of An End’, as it’s about the last seen character ‘Gaia’s’ transition from a mortal to her true goddess form. I named her after the Greek equivalent of our Mother Earth, and this picture represents her incarnation, (birth) surrounded by an explosion of vibrating, shimmering energy.

Her character affects everything … as she changes so too will the landscape, creating a butterfly effect that sets in motion the end of the story. It was heavily influenced by how I see the human spirit; after losing my mother people often ask me what I imagine comes afterwards, and my only answer is my belief in an endless energy, the circle I feel we are all a part of.

My mother is with me always, she is the earth … the rain, the wind in my hair as I walk to work. The body may cease, but I feel the vibrations of people continue, like ripples from a stone cast in a lake, and it was this power of spirit that I have tried to express within the picture.

To dive into detail regarding the handmade headdress, the inspiration behind many of the different aspects of the photo, and what this first step towards “the end” of Wonderland means for her, we highly recommend you check out her full behind the scenes blog post by clicking here.

And if you haven’t already, don’t forget to visit our previous coverage and marvel at the beauty of some of Mitchell’s other Wonderland creations.