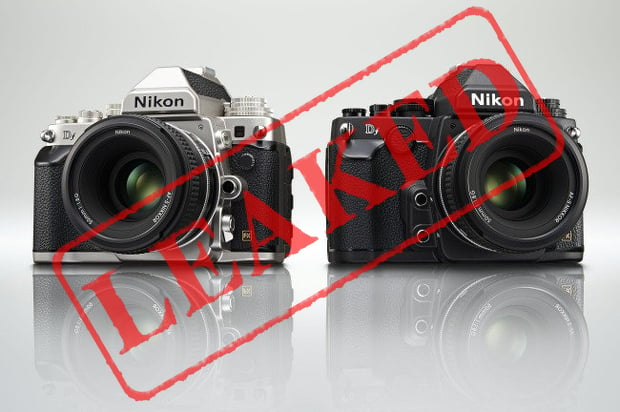 Rumors, leaks, and sneak peaks dominate headlines in photo gear news. More often than not, the appearance, specs and even price of a new piece of gear (this applies particularly to cameras) is known well before its manufacturer announces it themselves — a fact that should come as no surprise to frequent PetaPixel readers.

Just to point to some recent examples, the Nikon DF, the Sony A7, the Pentax K3, the Panasonic GM1, the Nikon D610, the Olympus OM-D E-M1, the Sony QX Series, the Sony A3000, and the Panasonic Gx7 were all revealed to the public first through leaks rather than official press releases. That’s just since July, and the list goes on and on the further back into the past you go.

In addition, the network of organizations and websites dedicated to the proliferation of rumors is massive, bigger even than regular consumers of this media might suspect. You can bet there’s a dedicated rumor aggregation website for each and every camera manufacturer (from Leica to Fujifilm), and many dedicated to specific lens mounts, form factors and non-camera gear.

It’s true that some of these are owned and operated by the same group, but then there’s also multiple groups dedicated to some of the bigger brand names (see Canon Rumors and CanonWatch). Plus, there’s another handful of sites whose focus spans across the entire industry, like Photo Rumors, NEWCAMERA, and Cameraegg. That doesn’t even take into account the large number of blogs and news outlets that often publish the findings reported by these various rumor-centric sites.

As many as there are, all of these outfits still seem to get plenty of attention if the number of Twitter followers they have is any indicator (although that’s far from a perfect metric). Between the two of them, Canon Rumors and Nikon Rumors have amassed more than a hundred thousand followers.

The voracity with which even the smallest gear rumors are consumed is also often surprising. Last month sonyalpharumors released a blurry, pixelated image of just the top half of the Sony A7 a few days before it was officially announced, and the article garnered over a thousand recommendations on Facebook and nearly six hundred comments.

This isn’t necessarily a bad thing. Rumors aren’t the most reliable form of news, but many of the rumor sites mentioned so far do a good job of noting which rumors should be trusted and which should not. Canon Rumors, for example, uses a four tier reliability rating (CR0 – CR3) for its sources.

Sure, there are some hiccups every once in a while — I talked about the unfounded rumors that swirled before the release of the Leica X Vario in my last article — but the trustworthy wheat normally separates from the untrustworthy chaff pretty well.

So, this observation being made, what’s the takeaway? The takeaway is this: The eagerness with which photographers and photography enthusiasts devour the hottest gossip is another strong indicator of the emphasis these communities place on gear.

Some might call this criticism: plenty of photographers (like Olivier Duong) have expressed worry that the fetishization of cameras and lenses pulls one’s attention away from the art and practice of photography. Perhaps there’s some truth there. But one man’s gear fetishist is another’s gear aficionado who pays attention to the rumor mill whether or not they intend to buy anything anytime soon.

The real beneficiaries of this rumor distribution infrastructure are the gear manufacturers. It really is an advertising executive’s dream: a healthy chunk of your customers seek the smallest crumbs of information and propagate them to like-minded people.

I would find it surprising if there weren’t many cases in which manufacturers are actually willingly leaking information to help build buzz. Let me be clear, I have no inside connection or secret source with which to confirm this suspicion, but it’s hard to ignore the frequency with which certain patterns repeat themselves.

For example, there’s a pretty strong trend of high-resolution press images of cameras appearing in the 48 hours before the camera is to be announced. Perhaps that’s just evidence of the difficulty of maintaining secrecy while trying to launch a high-interest product over multiple continents, but I doubt many manufacturers are complaining about the popularity of the articles that cover these leaks.

Profoto Introduces the Revolutionary New B1: the First Studio Strobe with TTL

The Camera of the Future Isn’t From the Past