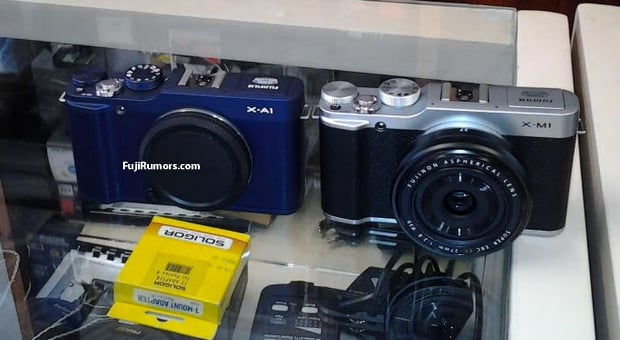 A month ago, we heard some rumors that Fujifilm was working on an entry-level X-Series camera for those of us who didn’t want to spend on the X-M1 but wanted something better than the X100. Details were (and to some degree still are) a bit thin, but now we have what seems to be the first leaked photo of the upcoming mirrorless camera.

Reported initially by Fuji Rumors, the rumor site’s source sent in this photo that seems to show an X-A1 sitting on a store shelf next to an eerily similar looking X-M1. As a few of the commenters on the Fuji Rumors post have pointed out, the similarities are a little too striking. In fact, it looks like the same exact camera, leading some to believe that it might be a fake.

But whether or not the photo is real, something everybody seems to agree on is that we will indeed see a Fuji X-A1 entry-level camera announced before the month is out. As previously reported, it is said to sport a regular APS-C CMOS sensor (not X-Trans), and it should be available from major retailers in several colors.

As always, nothing’s official until Fuji says the word, but with only 11 days left in August, rumor has it the company won’t be keeping us in suspense too much longer.