Earlier this month, we told you that Panasonic was planning to jump onto the retro-style bandwagon sometime in August with the release of its GX7 Micro Four Thirds mirrorless camera.

At the time we only had a few illustrations and some preliminary specs, but now that we’re about a month out from the announcement, some official photos and a more comprehensive spec list have both surfaced.

Thanks to the folks over at fotoMAGAZIN and 43Rumors, we now get to compare what we thought the camera was going to look like to what it actually looks like. At the top you’ll see the leaked photos, and below the colorized diagram created by DICAHUB: 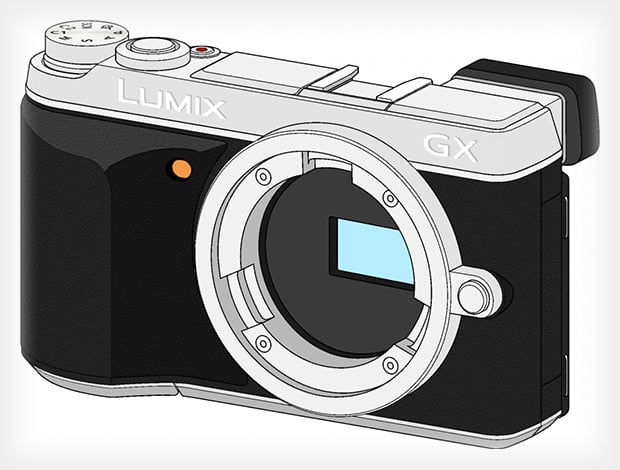 As you can see, the folks who thought this was going to look very similar to Panasonic’s L1 Four Thirds camera were pretty close.

As far as specs go, the leaked document indicates that the camera will come packing a 16-megapixel sensor (previously reported to be 18MP, 43 Rumors speculates that it might be a multi aspect sensor like in the GH2), tiltable 2.27 million dot EVF, on-sensor stabilization, up to 1/8000th shutter speed, 5fps continuous shooting (4 with continuous AF), focus peaking and integrated WiFi.

The camera should be announced sometime next month, with both all-black and black and silver options available and expected to ship in September. But before you commit to buying one, you should know that initial rumors of a steep price tag seemed to be spot on: the body only is expected to run you about $1,325 (1,000 euros).

Panasonic is also expected to release the GX7 in two different kits, alongside either a 20mm or 14-42mm lens.