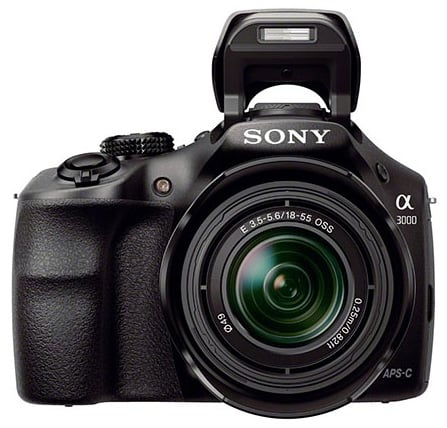 Over the last couple of weeks we’ve mentioned more than once that Sony has a lot of releases coming up, and as those releases draw near, inevitable photo and spec leaks also spring up. Yesterday it was the upcoming NEX-5T and a few new E-Mount lenses, and today it’s the first photo of the upcoming Alpha 3000 (sometimes referred to as the ILC-3000).

The photo, which comes to use courtesy of Digicame-Info, doesn’t reveal much, but it looks to be the same camera we told you about a week ago.

According to sonyalpharumors, the camera will be an entry-level, DSLR-shaped E-Mount system that will compete with Canon’s Rebel line. It’ll sport a 20.1MP APS-C sensor, 230K-dot LCD, 1.44 million-dot electronic viewfinder and the 18-55mm f/3.5-5.6 OSS pictured at the top as a kit lens.

No word on a specific announcement date yet, but the Alpha 3000, ILC-3000, or whatever you’d like to call it will hit shelves sometime next week for about 300 Pounds, which would translate into about $462.

Cooperation Wins Out Over Confrontation in the ILC Market