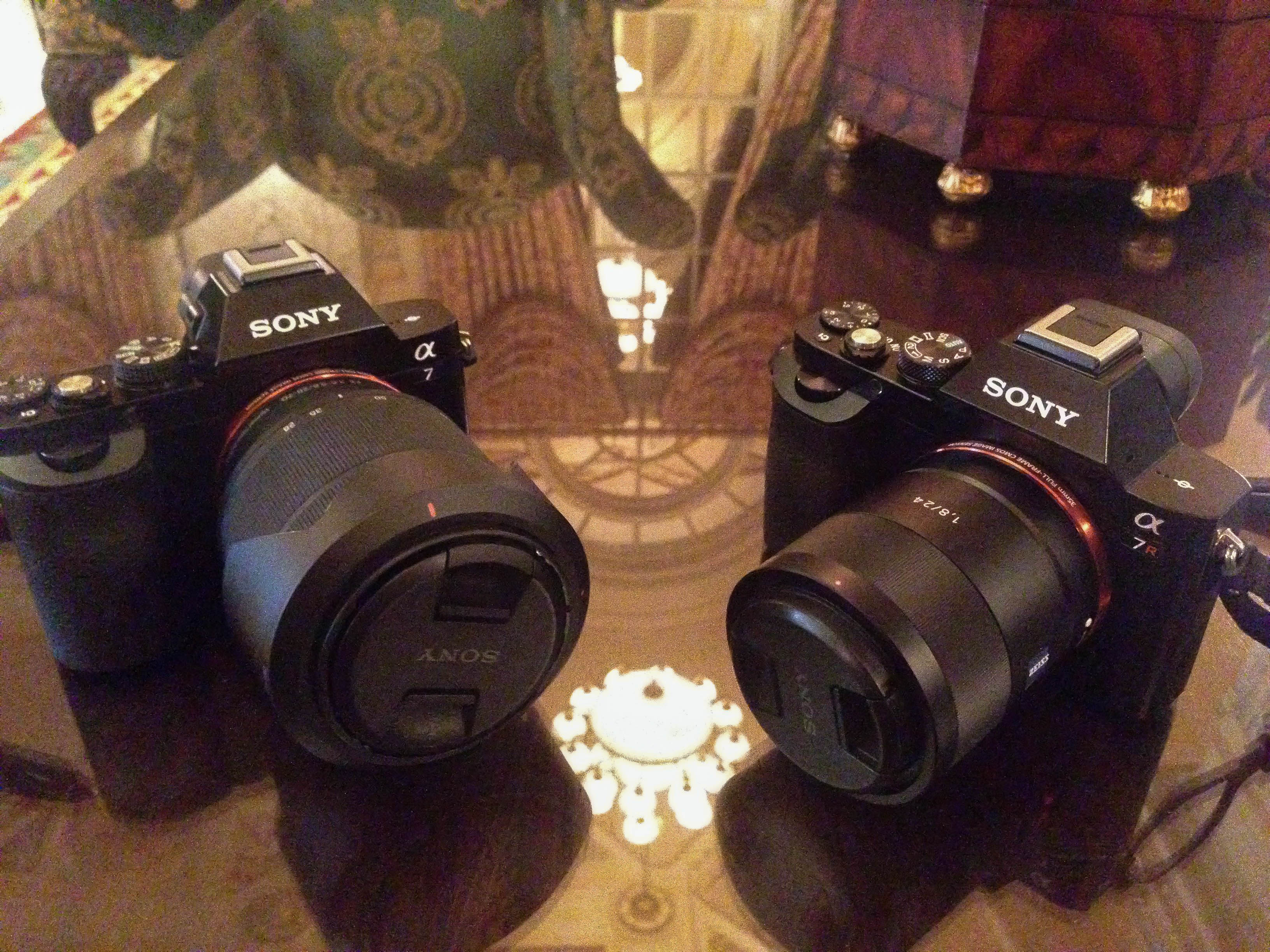 This last week, I had the great pleasure of joining many of my fellow writers from other major photo and tech news outlets for a week of fun and photography with Sony in Nashville, TN. Basically, the event gave us all a chance to test out the new mirrorless full-frame a7 and a7R cameras (as well as the RX10, which I’ll hit on in another post) in a variety of situations, with Sony artisans and engineers on hand to answer all of our questions.

A gallery of sample images are coming your way soon, but for now I wanted to outline some of my first impressions of what is good, bad and in-between about Sony’s revolutionary new shooters. 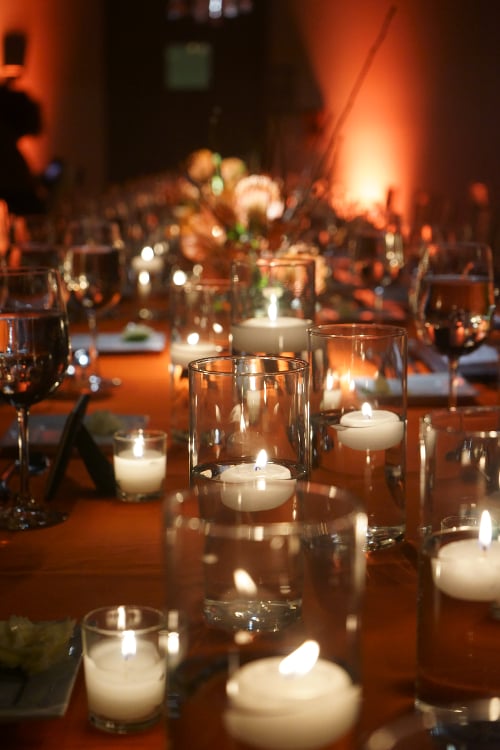 For the most part, both cameras act and feel very similar in hand. Until you get to the internals and some specific situations, your first impression of the a7 will be largely the same as your first impression of the a7R: both feel solid and, thanks to a fairly simple button and menu layout, are very easy to navigate and configure even for the novice.

Additionally: the electronic viewfinder is fantastic, the tilting screen makes it easy to capture some otherwise difficult-to-compose shots and the multiple input wheels and customizable buttons make it so that all of your most used settings can be adjusted very quickly and easily.

And when everything is dialed in properly, the resulting shots do not disappoint. Whether I was shooting with the ISO cranked in a dimly lit auditorium or using hot lights in a studio environment, as long as I nailed the focus, the images came out extremely sharp.

Nailing the focus, however, has turned out to be a bit more of a pain than I’d like. 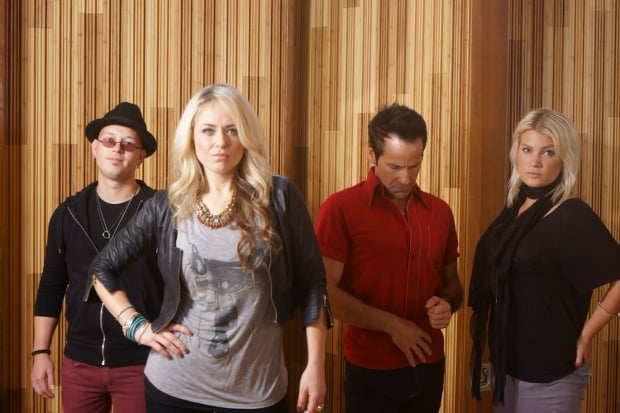 So far, problems both I and many of my fellow writers have noticed mainly surround the cameras’ focus systems. Whether it’s the phase and contrast detection AF-equipped a7 or the contrast-only a7R, AF set in “Wide” burned me more than once. For example, while shooting upcoming country singer Leah Turner and her band front and center, the camera somehow managed to focus on the background instead of the talent (see photo above).

Solutions include setting the AF to “Center” and using the focus and recompose technique, as well as going fully manual with help from the camera’s focus peaking; however, even focus peaking has failed me (and others) at times.

Especially when using large aperture lenses like the A-Mount ZEISS 50mm f/1.4 (with an adapter) wide open, I was forced to enable the MF Assist — a feature that zooms in your live view/EVF image so you can really nail the focus — to really make sure I was getting things sharp after noticing that the focus peaking was often slightly off.

Another problem I’ve personally noticed has to do with the Auto White Balance, which leaves something to be desired when used in daylight temperature light. Not everybody has experienced this, so it may be a personal preference or even something to do with my individual units, but both cameras seem to shy a little closer to the cold side color temperature wise when left to their own devices. 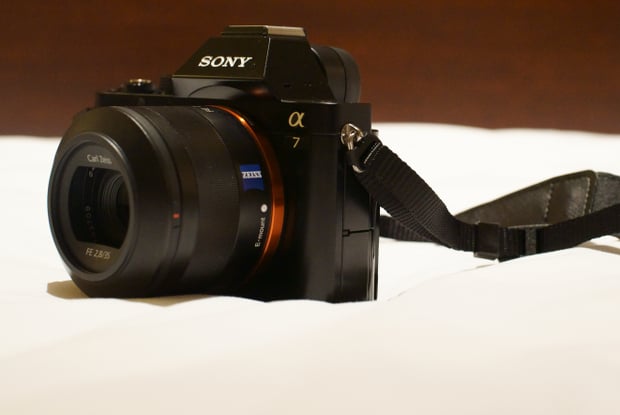 The a7, for those of you who aren’t familiar, is the little brother in this particular family. It boasts the smaller sensor of the two (24.3 megapixels as compared to the a7R’s 36.3), along with a few other minor differences that you can find out about here.

It’ll also only cost you $1,700 for the body only, which is why I was surprised at how many of the people at this event (myself included) tend to prefer it to the a7R. I’ve gotten to spent three full days day shooting with both cameras, and the slightly faster AF speed and lack of noticeable difference when using the a7 vs the a7R has me favoring the cheaper shooter.

Of course, the a7R has its resolution advantage, but for the everyday shooter, the cons — no AA filter (moire), slightly slower performance in a few areas (e.g. flash sync, AF and continuous fps) and a significant price difference — will outweigh the pros, making the a7 the more appealing choice. 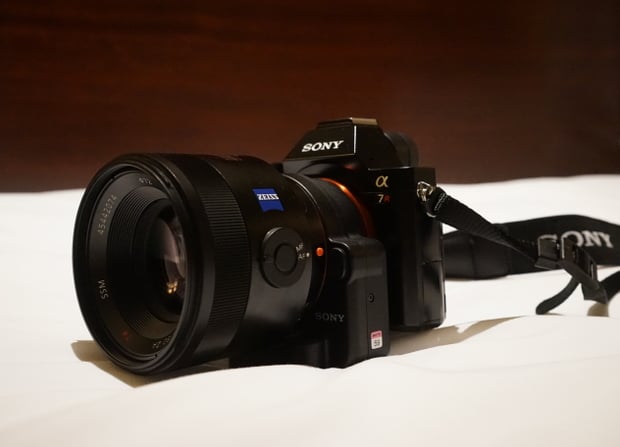 The first thing you’ll notice when you pick up the a7R vs the a7 is the exceptional build quality. That additional magnesium alloy has been put to good use, and even though the camera is actually lighter than the a7, it feels more solid at the same time.

You’re also getting a much higher resolution camera, which is the most obvious and noticeable difference between the two once you pull the images into your favorite editor.

On the bright side, the images out of the AA filter-less high res sensor come out incredibly sharp, which will no doubt appeal to many. But on the other hand, that sharpness can cause problems, especially when using a lens without optical stabilization. Every little movement will show up when you pixel peep, making it that much more important that you’re locked down on a tripod when shooting with the a7R.

Finally, since the a7R doesn’t have an electronic first curtain like the a7, you’ll probably also notice that the shutter is LOUD. It’s one of the first things I noticed, and although it might seem like I’m nitpicking, those who often (or ever) work in quiet situations will find the a7R is going to make a very conspicuous companion. 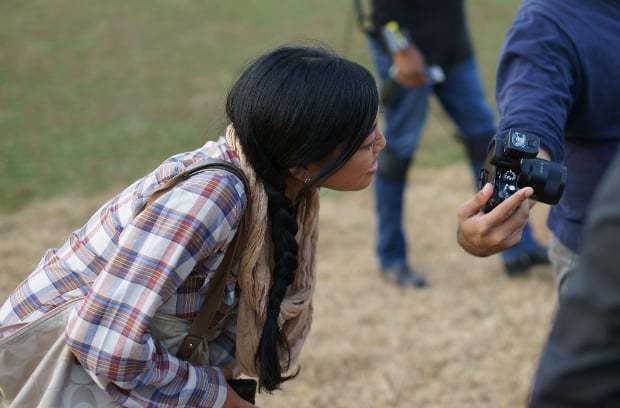 Keep in mind, this isn’t a comprehensive review — for that we’ll need to get the cameras in one of our reviewer’s hands and really put them through their paces for more than a few days. This is just a set of first impressions: both the good and bad things you’ll notice when you first pick up these awesome cameras.

The good news is two fold: One, both cameras are in many ways everything we hoped they would be performance wise, with only a few minor and firmware-fixable flaws. And two (for those who want to save money), if I had to reach a recommendation verdict right now, I’d recommend the a7 over the a7R hands-down for the majority of shooters. And that second one is REALLY good news, because we’re giving an a7 away right now!

So if you haven’t already, head over to our giveaway before next Wednesday and get yourself some entries into the contest. And stay tuned for a whole slew of sample images and some first impressions on the very capable RX10 coming up tomorrow.