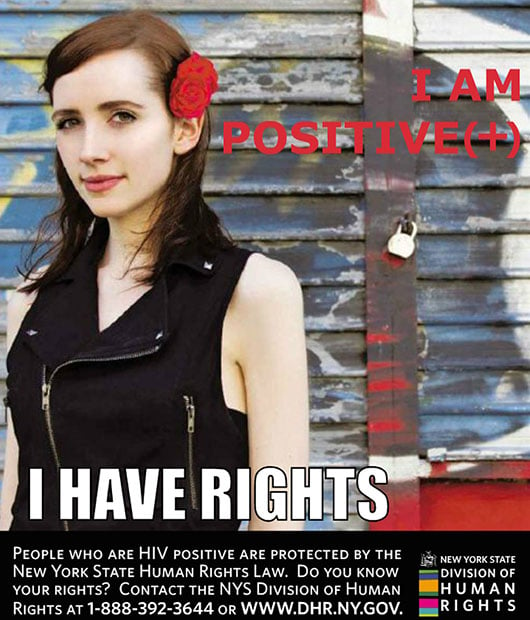 Stock photography heavyweight Getty Images is in some hot water after being sued by a model over the use of her portrait in an HIV-positive advertisement.

The ad, shown above, appeared across New York City in the April 3rd edition of the newspaper am New York. It features 25-year-old Brooklyn woman Avril Nolan as a poster child for the rights of the HIV-positive community. Splashes across the portrait are the words, “I AM POSITIVE(+),” and, “I HAVE RIGHTS.”

The New York Daily News reports that Nolan has had to have “awkward conversations” with people in her life ranging from employers, friends, and “potential romantic partners” as a result of the unwanted appearance.

So how did the photo end up passing through Getty in the first place? The photographer behind it is taking some of the blame. Jena Cumbo tells the NY Daily News that she “made a mistake” by not understanding her contract with Getty.

Cumbo never received authorization from Nolan to sell the photo after the fashion shoot two years ago, but she’s also arguing that the Division of Human Rights should have contacted Nolan before using her as a poster child for the HIV community.

(via NY Daily News via The Observer via Reddit)

Update on September 23, 2013: Getty has issued this statement regarding this story:

We empathize with and understand the sensitivity of Avril Nolan’s situation. Getty Images had a model release and relied upon the photographer’s documentation when we made the image available for license.

Quirky Portraits From the National Beard and Mustache Championships