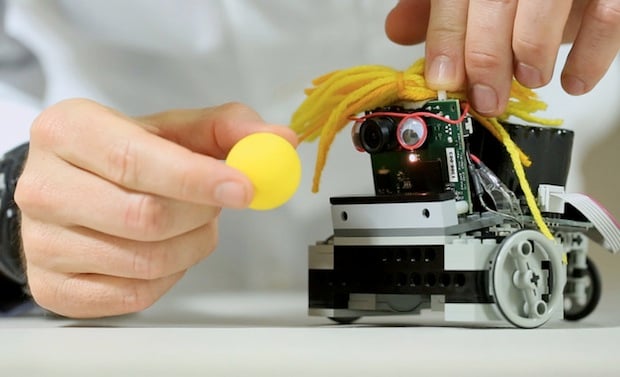 Camera technology is always being used/tweaked in one way or another to yield surprising or novel results. In some cases, that means creating a camera that sees like a bug’s eye. In others, one that perceives only motion, like a retina.

The most recent camera innovation we’ve stumble across falls a bit closer to the second of those. It’s called Pixy, and it’s a color-detecting camera that might some day soon be the eye with which your friendly neighborhood robot sees and interprets the world.

All robot world domination jokes aside, Pixy was designed with practicality in mind. Unlike a traditional camera, it doesn’t capture and send all of its image data on to the CPU. Instead, it tracks objects by color, and sends information about where that object is — and it does it fast.

Pixy was put together by the folks at Charmed Labs and a few embedded systems experts from Carnegie Mellon University. They wanted to create a high-speed “vision sensor” that could interpret the world around it and only send needed information so as not to overload the CPU it was connected to. For them, that translates into color and location.

But rather than try to explain what all the little camera can do with this color and location recognition capability, we’ll let Charmed Labs do the taking for us. They’ve taken to Kickstarter to fund Pixy, and so have put together the following video to show just how useful the little camera/microprocessor unit can be when it’s attached to different robotic hardware:

As you can see, they’ve already started using the camera in a few different ways. And since they’ve opened up the source code to anybody who would like to alter or improve upon it, there’s no telling what Pixy will be used for.

For starters, Pixy can recognize up to 7 different colors, and track hundreds of items in those colors all at once at 50fps. If you want to customize Pixy beyond the 7 primary colors, color codes like the ones below can be programmed in so that Pixy can identify just about anything.

We’ll let you come up with ideas for how this little system could be used in photography (motion tracking applications certainly come to mind), but there seems to be a lot of potential here. If you want to learn more about Pixy, or maybe snag one for yourself, head over to the Kickstarter page by clicking here.

For now, you can get your own Pixy with an Arduino cable for only $60, but once the campaign is over the price will go up. Charmed Labs hopes to deliver the first run of Pixys to backers by the end of November.