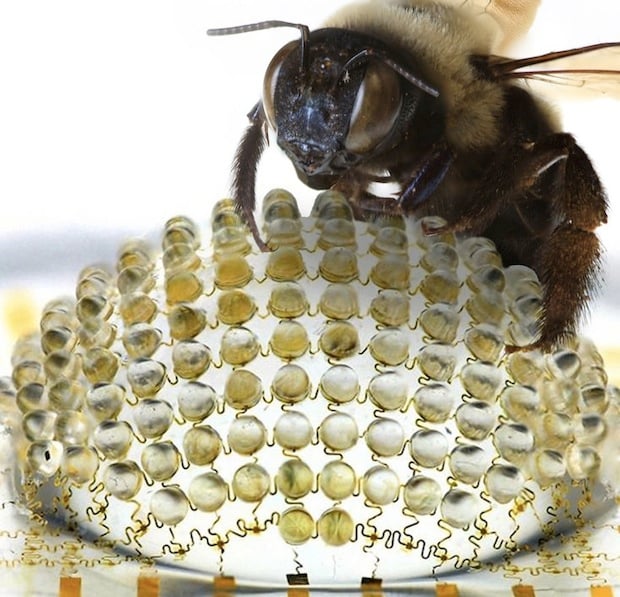 Just like the human eye, the arthropod eye is a marvel of natural engineering. But unlike human eyes, insect eyes approach seeing very differently. Instead of a curved lens focusing an image onto a plane of rods and cones, insects have curved eyes covered by “ommatidia,” each acting as a tiny pixel.

In a paper published today in the scientific journal Nature, a team of researchers from the U.S., South Korea, Singapore and China announced that they have managed to create a camera that mimics that type of eye — and all of its advantages and pitfalls along with it.

Because the arthropod eye is built, basically, out of hundreds (or sometimes tens of thousands) of little individual pixels organized onto a dome, they have two distinct advantages and one distinct disadvantage.

The good news: they experience a nearly 180-degree field of view paired with a nearly infinite depth of field. In other words, they can see almost all the way around them and everything, both near and far, is always in focus at the same time.

The bad news: you only get as much resolution as the number of pixels you have. In the insect world, the pixel war rages on. Fire ants come in at the bottom with only about 180 ommatidia, and dragonflies near the top with something like 20,000. The camera the researchers developed benefits from the same advantages and falls prey to the same issues. The sensor is basically a rubbery, flat, circular balloon covered on one side with ommatidia-like nubs. The lens at the top of each nub plays the role of an ommatidium cornea, while the posts the lenses sit on act as ommatidium cones.

Because the sensor is like a flat, rubbery balloon, all they have to do to round it out like an insect eye is blow it up. The camera can then capture a 160 degrees field of view with no distortion at the edges; and no matter if the subject is close by or far away, it’s in focus.

For now, the camera, with its 180 ommatidia, is more like a fire ant eye then the dragonfly eye they want to make (it’ll take shrinking all of the parts significantly to achieve that feat). But the camera is still making headlines as the first working compound eye camera, according to an article in Nature.

The current prototype can only produce black-and-white, 180 pixel images; but future iterations could be game changing in the tiny camera game, with applications ranging from spy cams to endoscopes.