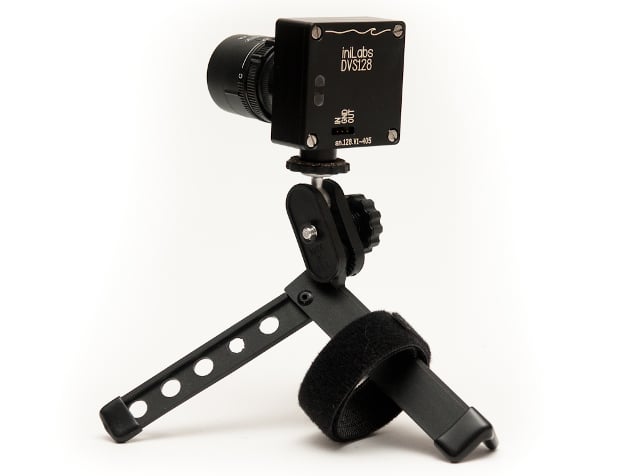 Technology often borrows ideas from nature, and camera technology is no exception. For example, you might remember the bug-inspired compound eye camera we shared just a few months back. Engineers at Swiss company iniLabs don’t want to mimic bug eyes, however, they’d rather create something that mimics the human eye. And that’s exactly what they did with the new Dynamic Vision Sensor (DVS) 128 camera.

Unlike your standard sensor, the neurons in your retina don’t record the full spectrum of information in your field of view, only the movement. The DVS128 was built from the ground up to work in the exact same way, recording only motion.

Rather than bringing in gigabytes worth of image information, it focuses exclusively on capturing movement, and as such manages to work much faster and much longer than your standard camera, all while accumulating less data. The downside is that this camera won’t win any visual points any time soon. Since it’s only capturing motion, this is what the output looks like:

Another cool aspect of the camera is that the biologically-inspired tech doesn’t stop there. Since they were mimicking a human process, the engineers wanted a chip that could handle the information in the same way our brains would: namely IBMs neuromorphic chips.

“What we’re talking about—the cameras sending information when something changes—is actually a very central theme to how the brain works, or at least how neuroscientists think it works,” said Cornell computer scientist Nabil Imam when he spoke with Technology Review. “We’re capturing brain features at a high level.”

In terms of application, the camera is meant to aid systems that need to react quickly to external stimuli, much like we do. The kicker is that the camera often works even faster than our brain. In the future, the team hopes to add color sensitivity to the DVS camera, and continue working on improving the resolution beyond the current 240×180.

If you’d like to learn more about the camera or even buy your own for a cool $2,700, head over to iniLabs’ website by clicking here.