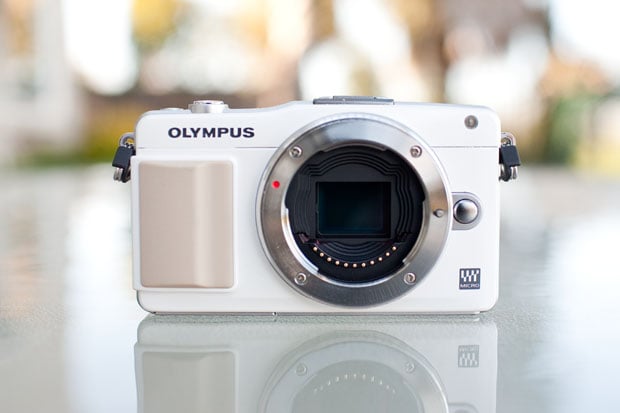 Olympus first ushered its PEN brand into the digital age back in 2009 with the E-P1. Since then, the lineup has split into three distinct tiers: the E-P line for standard PEN cameras, the E-PL line for smaller “Lite” models, and the E-PM line for even smaller “Mini” models. Goldilockean photographers can therefore choose the size and feature set most appropriate to their needs (and hands).

Unveiled in late 2012, the E-PM2 is the second generation PEN “Mini”, offering pretty much exactly what the E-PL3 does except in an even tinier package, without a tilting screen, and carrying a friendlier price tag. 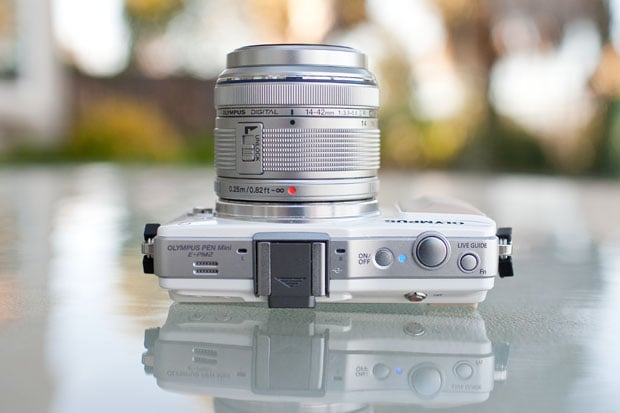 The camera is designed to be a consumer-friendly “gateway camera” to the PEN line, and is the smallest and lightest of Olympus’ PEN offerings.

However, don’t let the diminutive body deceive you about what’s within: the camera packs the same Four Thirds sensor size as all other Micro Four Thirds cameras and captures 16 megapixels in resolution. You know the highly regarded Olympus E-M5? The E-PM2 features the exact same sensor.

One of the main selling points of the E-PM2 is its compact body, so let’s start there. The camera is about the same size as a high-end compact camera. It’s small, but not too small. The thumb grip on the back and the larger grip on the front are great for the ergonomics, and make the camera feel much more comfortable than it looks like it should.

You’ll be able to shoot one handed without worrying about the camera slipping out of your hand and smashing onto the pavement below. 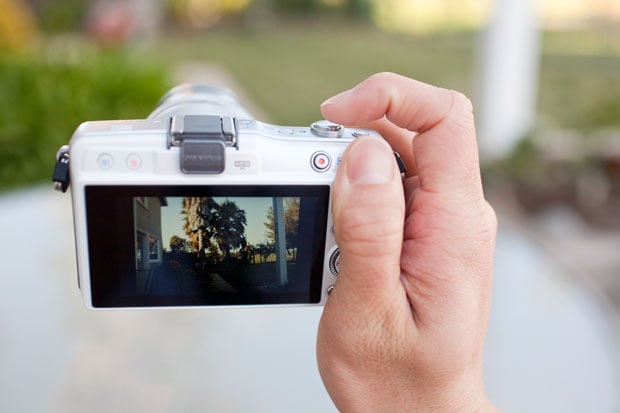 The E-PM2 is also as fast as it is small: it’s a very speedy little camera in a number of different ways. Autofocus is fast and accurate. The AF system was able to rapidly lock on to virtually every subject we threw at it, even in low-light environments.

For those of you who need a camera that’s always ready to capture life’s most precious moments (e.g. an embarrassing photo of your friend), you’ll be happy to know that the E-PM2 has a blazing fast startup (and shutdown) time. Even when the camera is completely off, pressing the On/Off button instantly wakes it from its slumber. It feels as though the camera is perpetually on standby and at the ready. Powering off is just as fast.

Here’s a very short video demonstrating the startup and power off times of the E-PM2:

Build quality-wise, the camera feels very light and ever-so-slightly plasticky, but not cheap. It won’t groan and creak like some low-end cameras do if you wring it in your hands.

On the back of the camera is a 3-inch LCD touchscreen. At 460K dots, its offers less than half the resolution as some of the other screens you’ll find on the market. However, at this size it doesn’t make much of a difference when it comes to framing and reviewing shots. 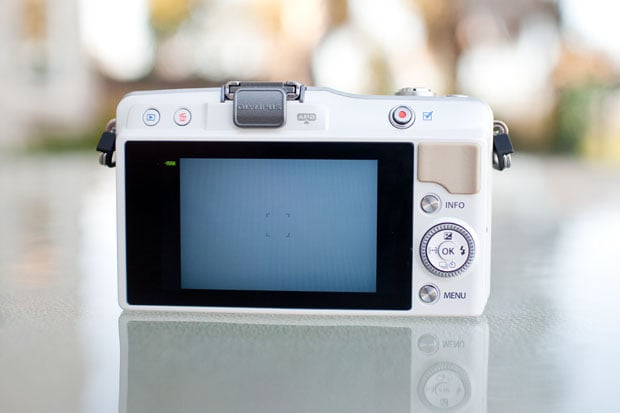 It’s sharp, sensitive to the touch, accurate in its colors, and very responsive — even in low light. This is a screen that isn’t plagued by the slow and blurry refreshes common in many LCD screens. What good is an ultra-high-res screen when it slows to a crawl when you’re indoors?

There’s a semi-thick black bezel around the entire screen, which seems like a waste of space. It feels like Olympus could have squeezed a larger touchscreen into the camera without having to change anything else about the design. This is a minor gripe, though.

The controls of the camera are definitely geared toward casual consumers rather than serious photographers — the default configurations, at least. Most options are tucked away inside the touchscreen menus and behind the directional click wheel that squeezes 5 buttons and a dial into a very small area. 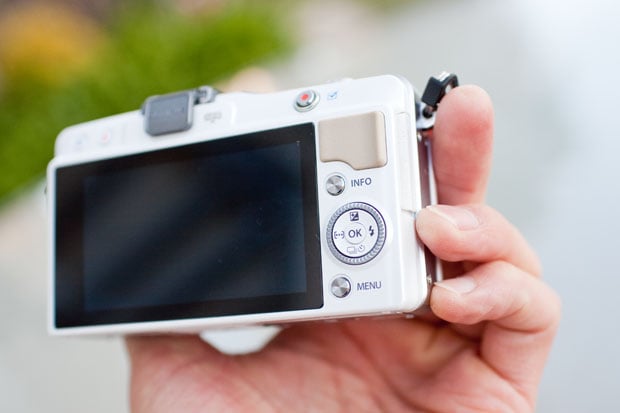 The image quality of the camera is, well, Four Thirds quality. If you’re coming up from a smaller sensor or are already used to using a Four Thirds-sized sensor, you’ll be quite happy with the E-PM2’s photos. It has the E-M5’s sensor, after all, and that camera is praised for its image quality.

Noise doesn’t start becoming a problem until ISO is boosted way beyond 1600, so you’ll be able to snap acceptable low-noise, non-blurry shots even in dimly lit environments. The color and detail reproduction of the camera are quite good.

Here are some sample shots captured at various ISOs, all the way up to 25600 (we’re guessing you’ll spot that one quite easily):

The E-PM2 is a camera that’s clearly geared toward entry-level photographers and casual consumers, and its user interface design reflects that. The controls on the camera are relatively sparse, and many of the features and settings are tucked away inside digital menus rather than on the camera body itself. 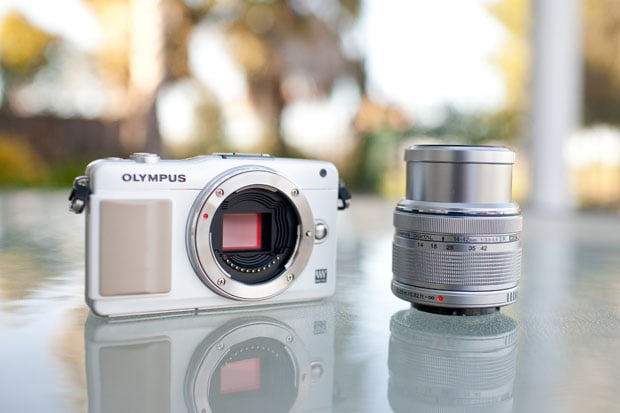 What was slightly frustrating was that the “dumbed down” interface actually makes things less intuitive. If a good camera UI is one in which everything you need to do can be figured out without looking into the instruction manual, then the E-PM2’s interface falls short of that.

Let’s say you want to turn off something like the camera’s beep or the autofocus illumination light that shines when you try to focus in low light. Doing those things should be simple and straightforward, right? Well, it wasn’t.

First, you’ll need to enable a custom menu inside the main settings menu in order to unlock many of the camera’s more advanced settings. This is apparently to shield newbie camera users from confusion by offering a very sparse interface out of the box. It’s great if you want to use the E-PM2 as a souped up compact camera, but a bit irksome if you’d like to unlock its full potential. 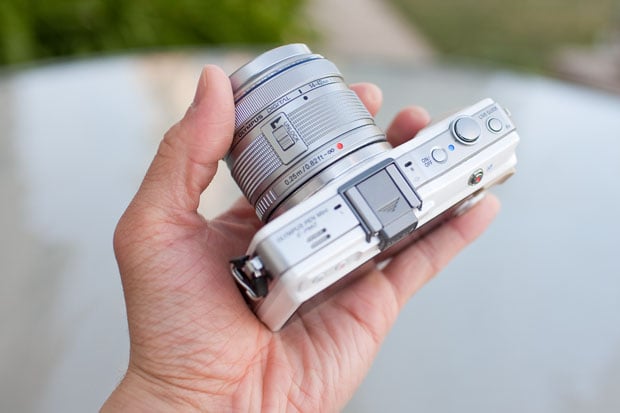 Another example of the dumbed-down nature of the UI is AE-locking. Fixing exposure is a pretty basic and commonly used function, but this camera doesn’t offer a button dedicated to that purpose. Instead, you’ll need to go deep inside the settings in order to configure it the way you want. It’s powerful and flexible, but not as intuitive as it could be.

The Olympus E-PM2 is a camera that’s geared toward — and very suitable for — beginning photographers and casual consumers. More advanced photographers may find the camera a bit frustrating to use, but it delivers on what it’s designed to do, which is shoot high quality images for people who want a highly portable (yet very capable) camera. 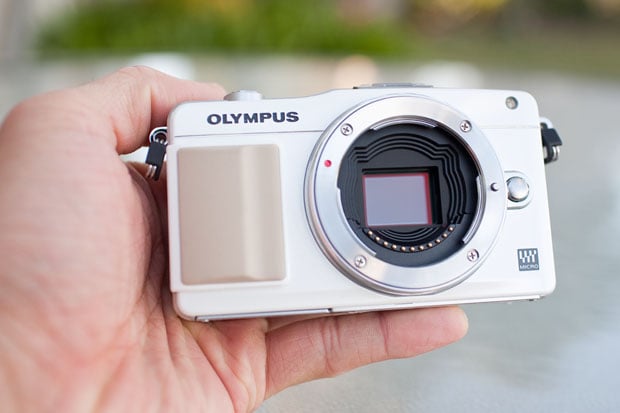 If you’re looking for a pint-sized companion to your larger interchangeable lens camera system, just be aware that many of the E-PM2’s more advanced features and functions will require a couple steps more than the camera you’re used to. You’ll always want to hold on tightly to the camera’s instruction manual (or download it or have it bookmarked), as the user interface sometimes isn’t the most intuitive thing to figure out on your own.

Aside from the sometimes frustrating interface, the camera is a solid and very capable option for anyone looking to do casual photography without having to carry too much bulky gear.

Photos of Trash Heaps Made to Look Like Chinese Landscape Paintings