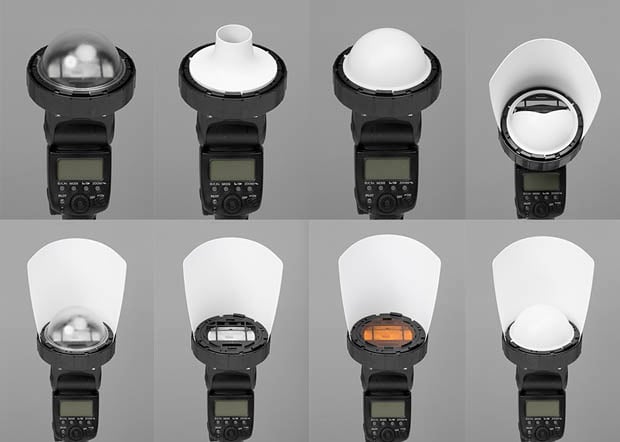 Spinlight 360 is a relatively young startup company that makes modular flash modifier systems for speed lights. Its products are based around a ring assembly attached on the head of flash units that various modifiers can be mounted to, allowing it to be a “jack of all trades” of sorts when it comes to controlling light and shadows.

Attachments include opaque bounce cards, translucent white domes, and a snoot. The direction of your light can be controlled by twisting the ring assembly, which rotates a complete 360 degrees (hence the name of the product).

Here’s an 8-minute-long video that gives a introduction of the system and a demonstration of what the modifiers can do for your resulting photographs:

In addition to being modular, the SpinLight is also pretty universal. Most standard-size shoe-mount flashes can be used with the system, as the head attaches using a simple Velcro strap.

The SpinLight 360 comes in three flavors — Original, Event, and Extreme — that cost $89, $99, and $149, respectively. The basic version comes with the most basic components, while the Extreme package includes extra attachments and an integrated gel system.