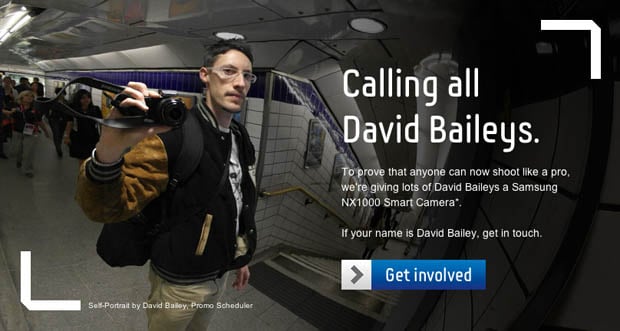 Samsung is doing one of the strangest promotional stunts we’ve seen in recent times. To celebrate the new NX1000 mirrorless camera announced back in April, they’re giving away the camera to anyone in the UK named David Bailey.

That’s right. If you share a name with the famous British photographer — regarded as one of the best in the land — then there’s a NX1000 with your name on it. If you qualify — getting your name changed now probably doesn’t count — you can sign up to receive a camera through the campaign’s Facebook page by midnight tonight.

Once the company receives your application, you’ll get a call from a representative who will ask you a bit about your interest in photography. 19 David Baileys have applied so far, but there’s still plenty of cameras to go around: they’re hoping to give away a total of around 200 cameras.

If you’re selected, you won’t just receive a camera: Samsung is also planning to fly all the David Baileys to a special event in London where the cameras will be distributed (I’m guessing the “real” Mr. Bailey himself will be making an appearance as well).

A camera and a free trip to London? If you’re a David Bailey, why are you still reading this? Go claim your prize now!

People vs. Places: Double Exposures by Two Photographers on One Roll of Film

All the Unedited Photos from a Portrait Session in One Minute