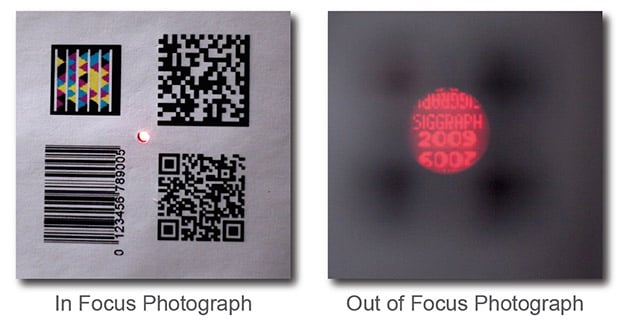 Barcodes can be found everywhere, but using existing barcode systems with ordinary cameras require that the barodes be printed large or that the camera be placed close to the code. MIT’s Bokode project is a new system that magically stuffs barcodes into bokeh, allowing ordinary cameras to be used as barcode readers from a distance. The codes are contained in little points of light that only turn into codes when viewed through an out-of-focus camera lens. You’ve probably seen how little bright points of light grow into larger and fainter points of light when you defocus.

Here’s a video describing in more detail how exactly the system works:

In the future this kind of technology may be used for augmented reality purposes. For example, imagine walking down a street and learning things about various stores and buildings by point your cell phone camera at little points of light on the fronts of the building. Currently this kind of thing exists, but only in barcodes that you have to walk up close to.

Who knew bokeh could be so useful?

Hasselblad Tries to One Up Leica with 499 Ferrari H4D Cameras