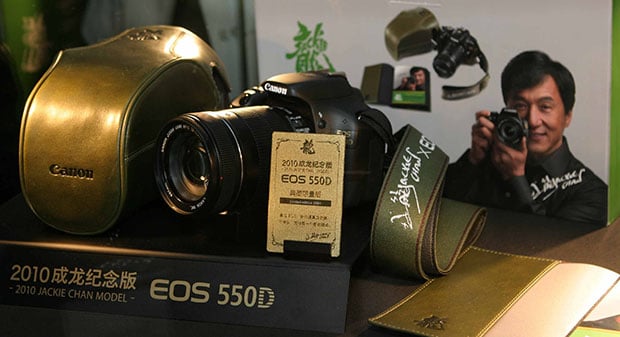 Okay, so Polaroid partnered with Lady Gaga, and Sony has teamed up with Taylor Swift. How about Canon? Well, they’ve just gone a step further by releasing a Jackie Chan-branded version of the Canon Rebel T2i (AKA 550D).

The “EOS 550D Jackie Chan Eye of Dragon” special edition kit comes with an EF-S 18-135mm lens, camera case, strap, and special photo album. Everything except the lens is branded with Jackie’s logo. Only 2010 of these kits will be made, and each costs a whopping ¥10,000, or roughly $1465.

Any guesses as to which random celebrity Nikon is planning to team up with?

Cookbook of Recipes by Famous Photogs