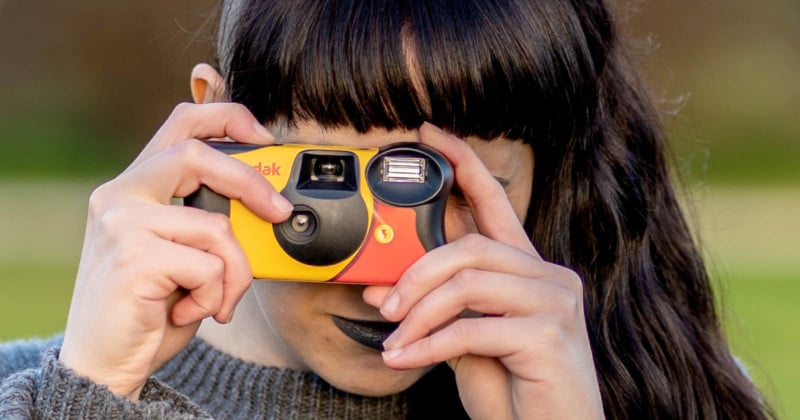 Once a staple of photography for the general populace, disposable (or “single-use”) cameras have become something of a niche — most people who never stopped shooting film or those younger audiences who are coming to it for the first time choose to use an affordable SLR or point and shoot camera. The image quality is quite superior and a single roll of film is less expensive (though typically not by much) than a disposable camera.


Despite declining sharply since its peak in 2004, the disposable camera market is still here. Why? Perhaps because above all, they embody a strong nostalgia factor — or pseudo-nostalgia for younger folk. The romanticism for a bygone era of less-than-perfect imagery, typically described as “character,” is most immediately obvious when considering the massive popularity of the instant camera market.

Further bolstering the appeal of lo-fi photography is the simplicity epitomized by disposable cameras. Wind film, frame, and push the shutter button. The cameras are fixed focus with a fixed shutter speed, so the only decision that needs to be made is whether to employ the flash.

It’s worth noting, given the current climate emergencies, that while something labeled “disposable” would seem to be very environmentally unfriendly, most places that develop film do recycle these cameras. In fact, the cameras are primarily made from plastic, metal, and batteries — all recyclable — and are designed to be easily disassembled. Additionally, the cameras are often rebuilt and resold — Fujifilm has been doing this since 1990. If in doubt, simply ask your film developing lab what they do with the camera afterward.

Any guide is meant to make it easier to narrow down the plethora of options on the market, so we are looking for the best cameras in several categories to suit a variety of applications and needs. It’s often difficult, if not impossible, to define “best,” especially given the inherent subjectivity in making one single choice.

For our purposes, for this topic, “best” refers to a combination of image quality, price, features, and accordance with the necessary utility.

With that in mind, we have broken this guide down into six categories. 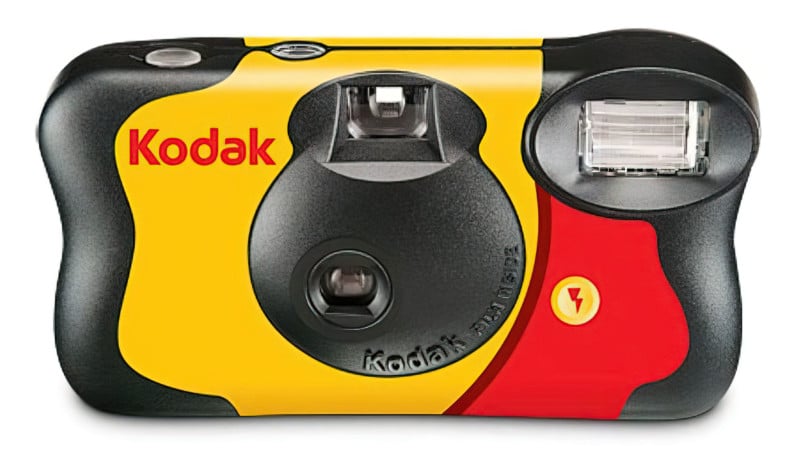 One could say that Kodak kickstarted the concept of a “disposable camera” when it released the first mass-market, affordable camera in 1900 — a simple cardboard snapshot camera with a fixed focus lens and rotary shutter, all for the equivalent of $35 in today’s dollars, known as the Kodak Brownie.

While Fujifilm released the QuickSnap in 1986 — the first 35mm camera marketed as “disposable” — Kodak quickly followed up by launching the Kodak FunSaver in 1989. And since then, it has remained the most popular disposable camera on the market.

There isn’t anything particularly special about the Kodak FunSaver. No fancy features. No amazingly sharp lens. Nothing about it really stands out. And perhaps that’s what makes it an overall choice — it is simply exactly what you expect and works for almost everyone’s needs.

Compared to the Fujifilm QuickSnap, the second most popular disposable on the market, the FunSaver was chosen primarily for one reason: it’s loaded with ISO 800 film, while Fujifilm favored ISO 400 for the QuickSnap. What this means is that the camera is usable in a slightly wider range of conditions — given the small apertures of disposable camera lenses, this is very beneficial.

The flash is also more powerful than the QuickSnap, which extends the camera’s latitude just a little bit more.

While the disposable camera market is dominated by C-41 color film, there are a few options out there for those who prefer the monochrome aesthetic. One of them stands out above the rest: the Kodak Tri-X 400 Single Use Flash Camera.

Loaded with 27 exposures of Kodak’s oldest film stock — the panchromatic black and white Tri-X — the Tri-X 400 Single Use features more refined ergonomics than some other disposables, like Kodak’s own FunSaver. But it’s really what’s on the inside that makes this one stands out. Unlike the single-element lenses of other disposables, the Tri-X 400 Single Use is fitted with a 30mm f/10 double-element optic, making it perhaps the sharpest lens of any camera on this list. While image fidelity tends to drop off beyond 5 to 6 meters in other single-use cameras, the Tri-X 400’s lens performs quite well even at further distances.

In addition to this higher-quality lens, the camera incorporates a powerful onboard flash with a comparatively quick recharge cycle thanks to the large inner capacitor. A simple press of the recharge button will ready the flash, but should you decide to not use it, it will automatically disable itself after some time.

Lastly, there’s the titular Kodak Tri-X 400 film hidden within the camera’s plastic shell. Holding the title as the most popular black and white film stock ever made, Tri-X 400 is highly revered for its high resolving ability, fine grain character, and very wide exposure latitude. Not only does this bode well for both outdoor daylight and indoor flash subjects, but the film responds extremely well to push-processing.

Considering the Kodak Tri-X 400 Single Use Flash costs just over a dollar more than a roll of the film itself (albeit with 9 fewer exposures), this is absolutely worth giving a shot — its low price also makes it great for bulk party or wedding orders. 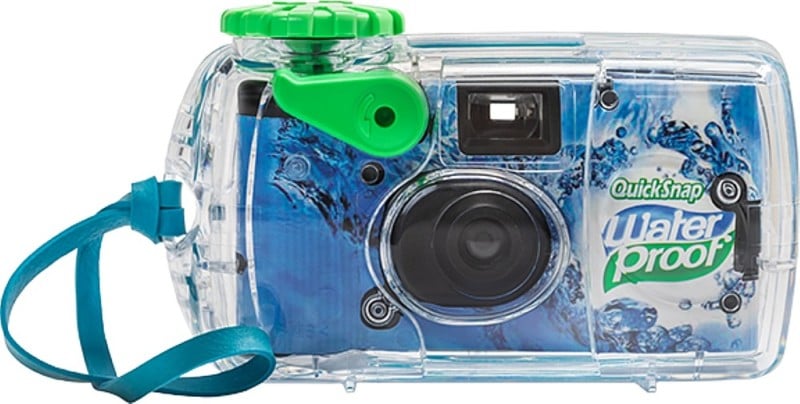 Going on vacation to the beach? Maybe swim with dolphins or whatever it is people do in the ocean? Whether you’re a non-photographer, amateur, enthusiast, or professional, you only have a few options for underwater photography. If you have a digital camera, you can purchase an underwater housing, but that will be a fairly expensive investment for what might be a one-time use. There are also waterproof cases for smartphones but again, that’s no cheap purchase.

Alternatively, and perhaps most importantly, cheaply, you can opt for a waterproof disposable camera. Our choice here is the Fujifilm QuickSnap Waterproof, a simple-to-use camera with a very large top-mounted film advance knob and a generous lever-type shutter release on the front of the camera, making the camera very easy to operate even with diving gear. Loaded with Fujicolor Superia X-TRA 800 and fitted with a 32mm f/10 lens, the camera is best used in good light (like all disposable cameras). While the QuickSnap Waterproof is only waterproof down to 35 feet compared to the Kodak Water & Sport Waterproof’s 50-foot rating, you most likely won’t be using it at such depths, anyway — nor would the light be sufficient.

The Fujifilm QuickSnap Waterproof edges out the Kodak with a significantly better quality lens and slightly nicer colors for underwater photographs. Both are great options, with robust shockproof bodies and beefy handling, but the Fujifilm QuickSnap is the choice to go with. 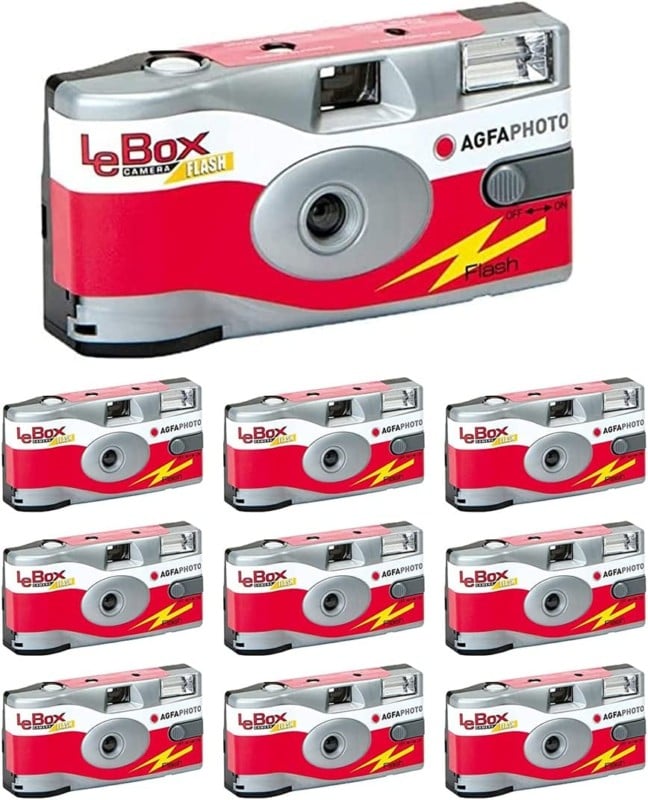 When my sister got married, she purchased a bulk order of disposable cameras, which she handed out to the guests to take photos after the ceremony. It ended up resulting in many very cool and unique photos from different perspectives, a nice change of pace from the more standard photos that I took. It really elevated her wedding album to have photos as seen through the eyes of the guests.

The Agfa Le Box 400 stands out as the best option for two primary reasons. It is comparatively very cheap, especially purchased in bulk packs. It also contains a very powerful flash that, unlike others, is designed to work at a greater effective distance of 4 meters (13.1 feet) — a valuable feature given that people usually aren’t huddled together in large group settings.

The film also handles push-processing quite well, so if you’re in a dimmer venue, you can easily push to ISO 800 without much compromise.

There are better disposable cameras out there, but unless you want to shell out quite a bit more money for modest improvements that may ultimately make no difference at all, the Agfa Le Box 400 is the way to go. 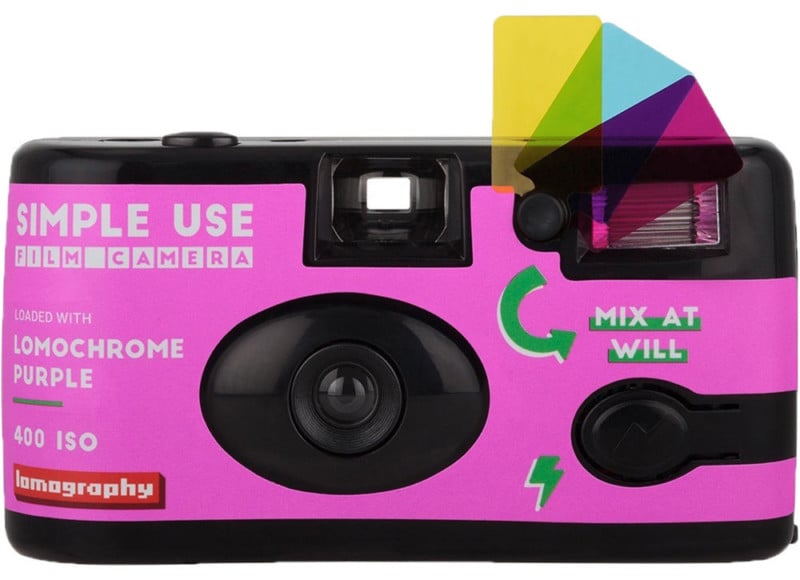 I think it’s safe to say that the resurgence of film, particularly among younger audiences, is at least in part due to the distinct results, which run the gamut depending on which of the many diverse film stocks you choose. If there’s one company known for leaning into that, it’s Lomography.

So, it’s not much of a surprise that the Lomography Lomochrome Purple is one of the more fun and unique disposable cameras on the market. The camera is loaded with Lomochrome Purple 400, a film stock with a singular aesthetic that almost mimics color infrared film.

It doesn’t stop there — the Lomochrome Purple features three swinging color gels that can be positioned over the flash to manipulate its output. Furthermore, the camera is fitted with a 31mm f/9 lens, which is anywhere from 1/3 to 2/3 of a stop faster than many other disposable camera lenses.

Finally, the Lomochrome Purple is actually reusable. You may say it’s not fair to include a reusable camera on this list, but aside from that aspect, nothing else about the camera is any different: it comes pre-loaded with film, features no controls beyond the flash, offers no warranty beyond the included roll of film, and comes in under $25. So, use it once or reuse it with whatever film stock you want, the process and results aren’t much different than any other camera on this list. 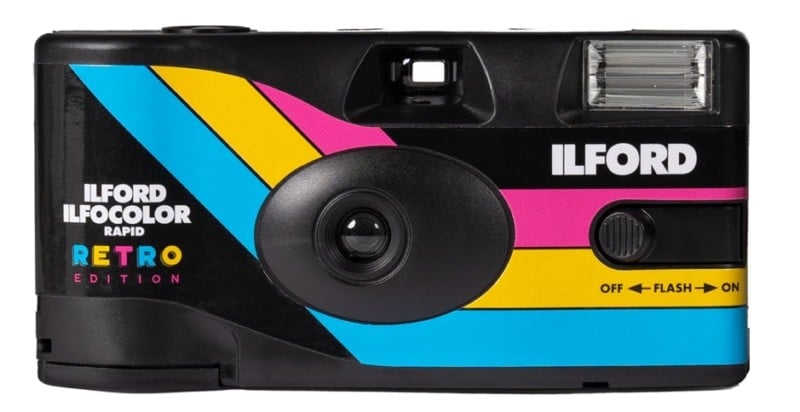 Ilford, a name dating back to the late 1800s, has long been associated with black-and-white film, photographic chemicals, and printing technology — its Ilfochrome positive-to-positive photographic process has historically been regarded as one of the best methods for reproduction of transparency (slide) film onto paper. Ilfochrome was more popularly known as “Cibachrome.”

However, Ilford Imaging does produce two very inexpensive cameras, one of which is the Ilfocolor Rapid Retro Single Use Camera. This cheap, disposable camera is loaded with the only color negative film ever produced under the “Ilford” name. The film is rated at ISO 400, and with a fixed focus 31mm f/11 lens and 1/125s shutter speed, the camera (like all disposables) is best used in good light, though it does feature a decent quality flash with a 15-second recycle time.

What makes the Ilfocolor Rapid Retro stand out is its single-element lens combined with its surprisingly nice color film.  The lens has pronounced vignetting and declining sharpness as you move away from the center — lending photos that distinct “retro” appeal — while the film is quite punchy and saturated, leaning toward warm hues and very pleasant contrast.