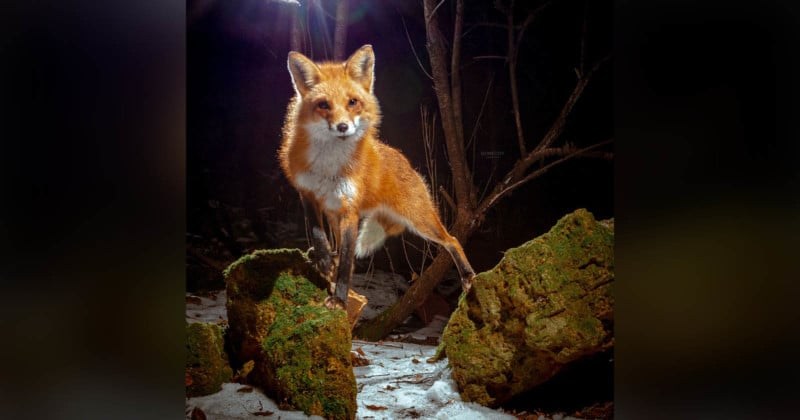 A photographer in Wisconsin has captured a series of stunning photos of a fox after the curious creature decided to take a closer look at his homemade camera trap.


Photographer Ross Harried built himself a camera trap last year using an old Canon T3i DSLR and 18-55mm kit lens he purchased secondhand for $50. To illuminate the outdoor scenes, he added two Nikon SB-24 flashes he found on eBay for less than $30 each. 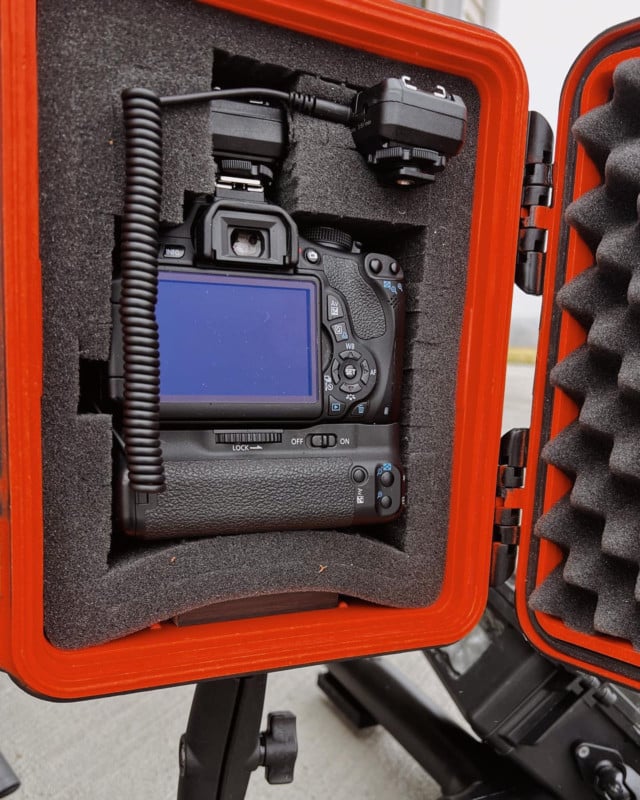 “The brains of this operation, or rather how it all runs smoothly, is the sensor and trigger/receivers,” Harried tells PetaPixel. “I am using all Camtraptions gear. It works amazingly and flawlessly so far.

“I have everything housed in custom-built weatherproof cases from Pelican cases and cheaper knock-off brands for the flashes. Everything runs off of rechargeable AA batteries and in normal temperatures, it can be left in the wild for up to a month at a time (so long as squirrels aren’t killing the flash by triggering it like crazy).

“The setup only lasts at most 5 days in the winter when the temps dip below freezing in Wisconsin.” 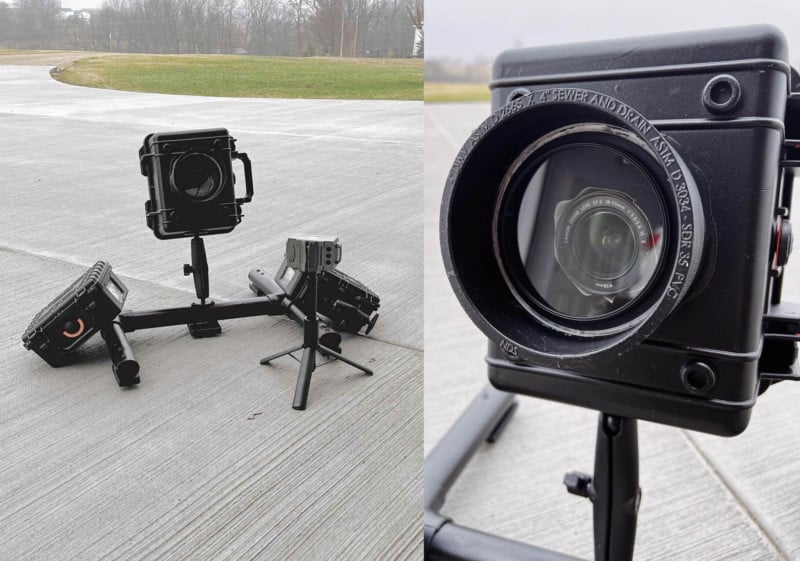 Harried had deployed the custom-built camera trap only a handful of times since it was built, as it takes a considerable amount of time to scout locations and track subjects.

Recently, however, he was tipped off to the fact that foxes were roaming a particular area.

“I scouted 5 foxes in the area, and grabbed some telephoto shots of them two days before I set up the trap,” the photographer says. “I then scouted a composition in the wooded area there — we had the littlest bit of snow left where I could see their tracks/a path they made between these two rocks. So I set up my system there.”

“Key light, sensors, camera in front and one backlight to create separation,” Harried says. “I had both flashes set to 1/4 power and the camera was set to 1/160 f/8 auto ISO capped out at ISO 800. I always manual focus, although admittedly focus is slightly off in this series.”

Here’s a behind-the-scenes look at the camera trap setup:

His careful scouting and preparation soon paid off. When Harried checked on his camera trap, he noticed bite marks on the camera trap. Upon reviewing the memory card, he found that a curious fox had walked right up to the rocks in the scene and had posed for a majestic photo that almost looks like a painting. 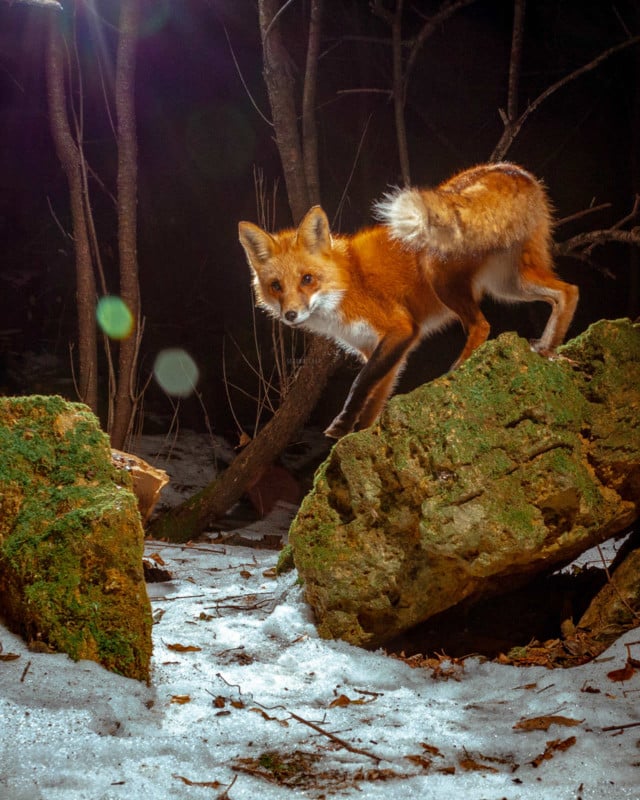 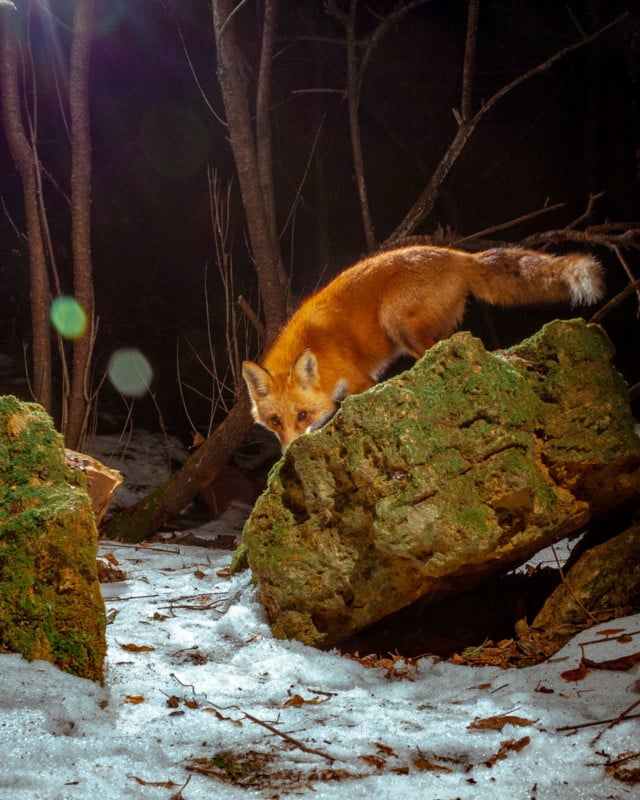 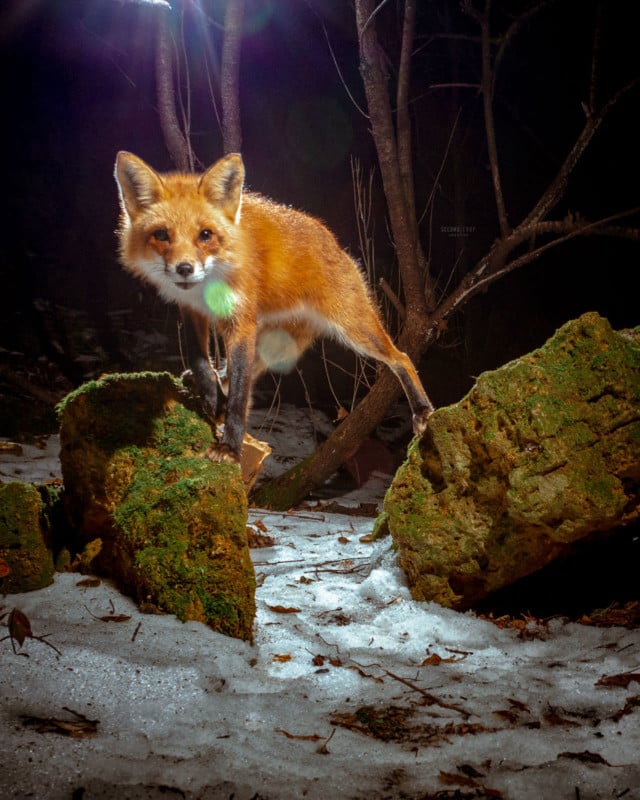 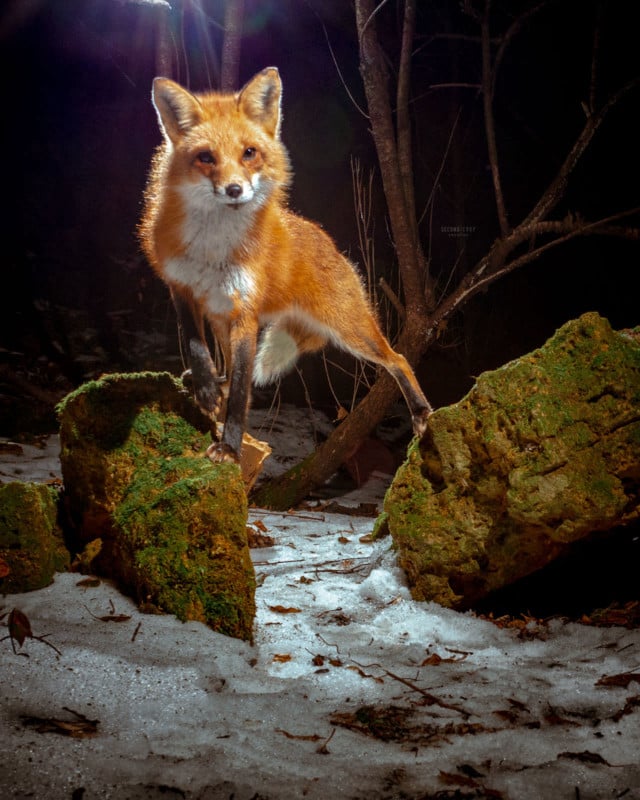 For Harried, who grew up on a dairy farm in Wisconsin, the photos were exactly what he pursues in photography these days. More of his work can be found on his Instagram page.

“My interest in photography started in high school as we had the luxury of having a darkroom and photography courses,” he says. “Now treat it as my personal treasure hunt.”

Based on the timestamps of the photos, it took less than an hour after the camera trap was set up for the fox to stumble upon it and have its photo taken.

It was “insanely lucky as I had no idea it would pose like that and also be so curious!” the photographer says.