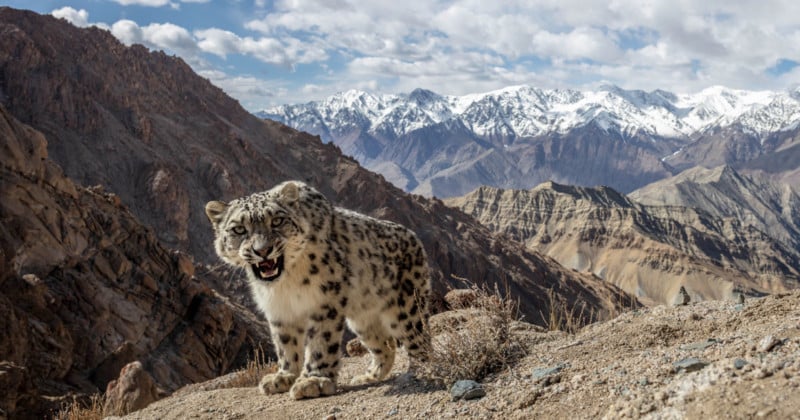 Fonseca spoke to PetaPixel to explain how he captured the stunning image and how his photography comes from a passion to conserve these ultra-rare, wild creatures.

“Snow leopards, also referred to as ‘Ghost of the Mountains,’ in the local language, are notoriously difficult to spot and photograph, because of their legendary ability to blend in with their surroundings,” explains Fonseca, who is originally from Germany.

“They are probably the world’s most elusive cats, perfectly camouflaged on mountain terrain.

“The challenge to photograph these rare and hard-to-find big cats in their natural environment. By sharing their beauty with the world I hope to raise awareness about their existence and the importance to protect their habitats.”

Fonseca specializes in DSLR camera traps and makes use of Canon 5Ds, and a 6D, with 24mm 2.8 lenses. He uses Camtraptions camera triggers and Nikon SB-28 speedlights, he builds the weatherproof houses himself.

“Setting up a DSLR camera trap can take you anything between 10 minutes and two hours, depending on location and complexities. Identifying and reaching the right location takes most of the time,” he says.

“There is no rule for success either. A location can give you all or nothing. You never know what you will get — and this is what I love about camera trapping.

Fonseca captured two images of the majestic snow leopard, one of it growling at the camera and one of it looking cute. He took the photos back in Sping 2020 but the photographs have hit the internet recently.

Fonseca has numerous images of wild big cats that are so spectacular it’s almost impossible not to stop and stare. Siberian tigers prowling through forests in the far east Russia, lions lounging in the Maasai Mara, and leopards caught skulking through Northern India.

Fonseca’s passion for big cats comes from the perilous danger sublime animals find themselves in. “All big cats are endangered. Habitat loss due to human expansion is the main problem,” he says.