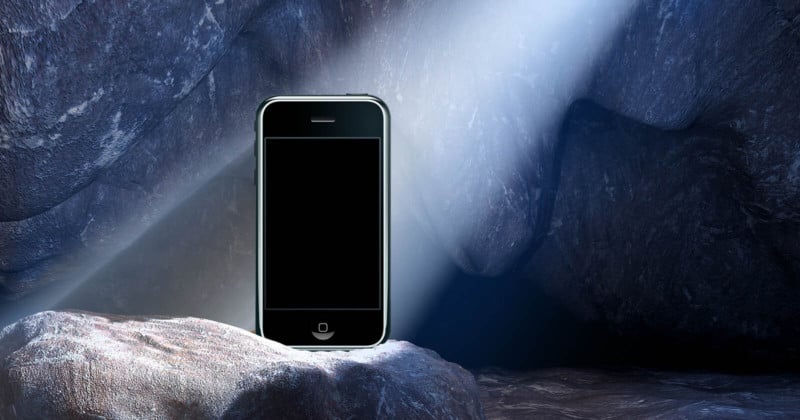 There is a camera that is making an unexpected comeback with Generation Z users on social media. With a 3-megapixel resolution and no flash, the 2009 iPhone 3GS is experiencing a renaissance.

Apple may have released an upgraded 48-megapixel main camera on the iPhone 14 Pro and Pro Max this past September to critical acclaim, but in the last few months, younger users have instead been obsessing over the camera on the 13-year-old iPhone 3GS.

Over the Thanksgiving weekend, Generation Z icon Nicola Peltz Beckham proudly posted a series of photos all taken on her iPhone 3GS camera.

But the true resurrection of the iPhone 3GS is most noticeably seen on TikTok, which has become one of the foremost social media platforms influencing camera trends today.

Last week, a clip posted by tech influencer Daniel Sin compared the camera on the iPhone 3GS to today’s iPhone 14 Pro and amassed over 6.5 million views.

The overwhelming consensus from TikTok viewers was that the iPhone 3GS camera was somehow “better” than the iPhone 14 Pro.

“The 3GS beats the iPhone 14 pro every time,” writes one viewer. Others complimented the “vintage” look of the iPhone 3GS, calling it “a vibe.” Another user said that they “would buy an iPhone 3GS just for the aesthetics.”

The praise for the old iPhone model does not stop there. On TikTok, the hashtag #iphone3gs has over 44.5 million views.

A clip comparing the the iPhone 3GS to the iPhone 13 Pro has over 20.8 million views with TikTok users similarly agreeing that the former 2009 camera “wins.”

In other widely-shared videos, TikTok users proudly show the photographs and the videos they took on their on iPhone 3GS cameras.

Nostalgia rules when it comes to Generation Z’s taste in cameras. In the last few years, that market has seen a younger subset of creators look to the camera technology of the past for inspiration.

Most recently, PetaPixel reported that the point-and-shoot digital cameras of the early 2000s making a comeback on social media.

Additionally, the recent resurgence in film photography and disposable cameras can be widely attributed to younger users.

Even the sudden rise of TikTok’s “most popular camera” the Fujifilm X100V can be tied to its online reputation as a digital camera that mimics an old film camera.

In this context, the emergence of the older iPhone models as Generation Z’s latest camera obsession is no surprise.

The iPhone 3GS is particularly beloved by TikTok users because of the camera’s “vintage aesthetic” as well as the model’s place in the history of iPhone photography.

Apple unveiled the iPhone 3GS in June 2009 and the company sold over one million units in its first weekend.

The iPhone 3GS was also the last iPhone model to only have one camera. That changed when Apple released the iPhone 4 with its front-facing camera in 2010 — unleashing selfies upon the world and changing everyday photography culture forever.

The iPhone 3GS stands out for younger users because it perfectly harks back to a simpler, pre-selfie digital era.

Generation Z finds comfort in the not-too-distant aesthetic of the iPhone 3GS with its softer focus and muted tones.

In the TikTok videos comparing the iPhone 3GS to newer Apple models, viewers have criticized how the modern smartphone camera excessively sharpens and clarifies an image. While the colors on a modern iPhone photograph may look crisp, a picture taken on iPhone 3GS looks more “real.”

The resurgence of the iPhone 3GS seems to be part of a wider trend of Generation Z which sees younger users experimenting with the cameras on older iPhones.

In a TikTok video, influencer Erica Stolman Dowdy claimed that using an older iPhone to take photos is a camera “secret that influencers don’t want you to know about.”

In the clip, Dowdy shows the difference between the photographs on her new iPhone 13 and her preferred camera on her iPhone 8, which was released in 2017.

TikTok users agreed with Dowdy, with one user commenting, “I knew it! My photos with the iPhone 7 were way better.”

Few could have expected the memory of the iPhone 3GS camera to pervade beyond 2009 — certainly, not the photo community. Depending on how much further this trend catches on, the iPhone 3GS could be the first of many older iPhone cameras that could experience a rebirth.