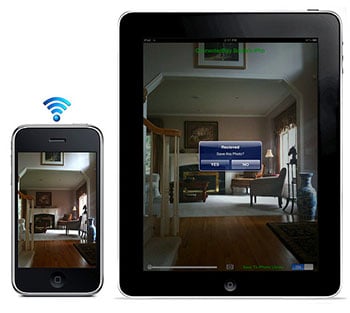 A common gripe about the iPad is that it doesn’t contain a built-in camera. Developer Yusuke Sekikawa saw this need, and wrote two applications that allow an iPhone 3GS to be used as an iPad camera.

Here’s what you need to do: download the CAMERA-A app ($0.99) onto your iPad, the CAMERA-B app (free) onto your iPhone 3Gs, connect the devices via Bluetooth or WiFi, open the apps, and voila! The iPhone should be function as an external camera for your iPad, allowing you to take photos using your iPad.

If you have trouble with the link, try disabling Wifi.

Camera for iPad is another app set that uses an iPhone as an iPad camera. While the $0.99 app will allow you to use a non-3Gs iPhone, it doesn’t capture images on the iPad directly, but transfers them to the iPad when taken.

Future apps might use this same iPhone/iPad setup for video chatting — something that wasn’t possible with a non-forward facing built-in camera.

Canon 7D Firmware Back from the Future