Black holes. They’re an astronomical phenomenon that sucks in all available light with no escape. So what if you could create a photo backdrop that could mimic that kind of light absorption without reflecting? A photographer recently used an ultra-black fabric to make the darkest photo backdrop in the world.


In the 5-minute video above, French photographer Mathieu Stern shares his recent experiments with Musou Black KIWAMI fabric by KoPro, which is able to absorb over 99.905% of available light. This means it literally no perceptible reflection at all, even in bright ambient sunlight.

KoPro also has black paint that is 94%-98% light absorption, so this cloth represents KoPro’s efforts to eliminate light reflection completely.

Stern tested two different versions of the backdrop cloth, one with a full spectrum infrared camera, and one with a regular camera capable of capturing available light. Both the IR Flock Sheet and the Available Light Backdrop were able to resist even bright, ambient sunlight, and maintain a completely black background, even in the IR spectrum.

The normal visible light black fabric will reflect red light to an IR camera, creating a red background. But since the IR Flock Sheet absorbs nearly all of the red light in the IR spectrum, it remains as black as the human eye can see, even in IR.

Stern was able to take images of plants with the IR camera, and isolate them with the black backdrop and the results are stunning, with no Photoshop trickery needed. But Stern said while the IR Flock Sheet is impressive, the Muso Black Available Light Black Fabric is simply amazing.

Even when shooting a picture using a flash, the black background reflects no visible light, not even the hotspot that usually appears on a flash illuminated image.

“At f/2, it’s like the object is floating in a black void,” Stern said.

Pushing it even further, Stern set his lens at f/0.95, and running up the ISO in steady increments, Stern found that it wasn’t until his camera reached an ISO of 51200 before the Musou Black backdrop started to show some light fade, though it could be argued that’s from the surrounding light coming into the camera and not any reflection. 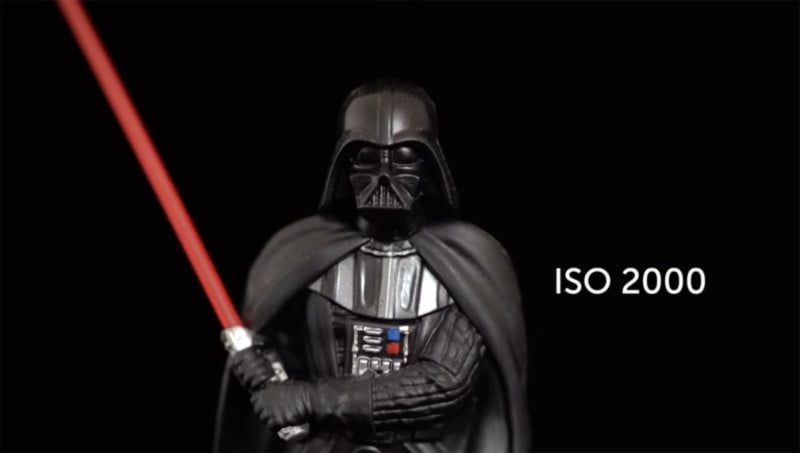 “This new material is mind-blowing,” concludes Stern, “and changes the way we can light a subject for video or a photo shoot.”

The Musou Black KIWAMI is on backorder due to its popularity, but it sells for about $62 (¥8,000) plus shipping for a 0.9x1m swath through KoPro’s website.