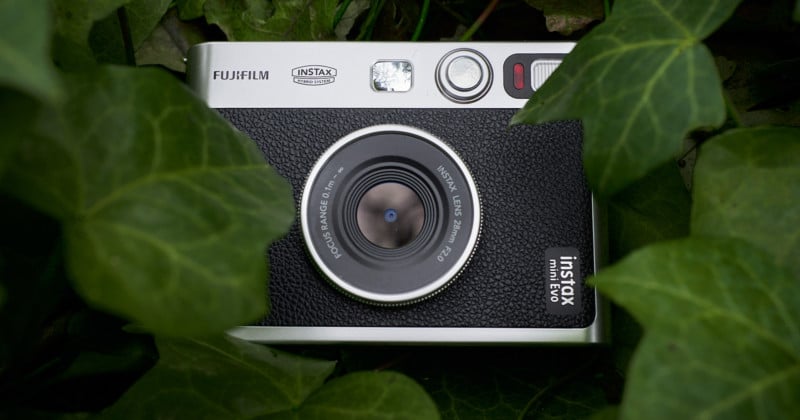 It’s a strange twist of fate that the company that rivaled Kodak in film manufacturing but currently makes very little of its money from the camera business should now be the largest camera manufacturer in the world.

However, before marveling at the technical merits of the X and GFX Systems, ponder that it’s actually Fuji’s Instax film cameras that are the source of its success having sold over 50 million units to date. How did Fuji get to this point?

While Fuji might be seen as the doyen of camera aficionados, lovingly crafting its X and GFX Systems into the well-rounded lines we now see and catering for the photographer “in-the-know”, its heritage stretches much farther back. It actually started manufacturing cameras in 1948 and has produced medium format, 35mm, compact, and sub-miniature models throughout its history.

However, its core business had always been film which dates back to 1934; Fujifilm became the largest film manufacturer in Japan before squaring up to Kodak as it fought for global market share. This led it into a natural venture with Xerox on photocopying solutions, with the diversification making electronic imaging and magnetic materials an area of research and development focus along with a sideways step into medical imaging.

It’s therefore not surprising that Fuji produced the first end-to-end digital camera in the form of the Fujix DS-1P. This technological leap forward oddly led to the demise of Fuji’s SLRs and, while it manufactured compacts in vast quantities, it wasn’t able to transition to the DSLR. It instead relied on its partnership with Nikon and used its camera bodies. As a result, Fuji never produced an in-house DSLR, and instead moved straight to mirrorless with the X-series.

What this all hides (and is shown below) is that the film business reached its zenith in 2001, held sway until 2003, then fell off a cliff so that by 2009 it had lost 90% of its market. For Kodak and Fuji, whose businesses were largely dependent on this revenue, it was a systemic shock.

The architect of Fuji’s turnaround was Chairman and CEO Shigetaka Komori who implemented VISION 75, which restructured the company and focused investment on potential growth areas where they had expertise. The health sector was an obvious target that used its expertise in imaging and industrial chemistry to target medical imaging and pharmaceuticals. 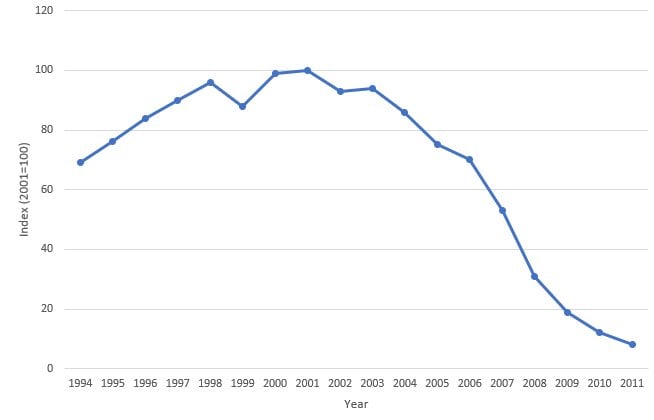 The change was dramatic: Imaging Solutions accounted for 54% of revenue in 2001. That has dropped to a mere 13% as of 2021, while Healthcare now makes up 48%. The difference is starker when you look at operating income; 9.5% and 65% respectively. The money is in healthcare.

Fuji’s approach to digital cameras makes more sense against this backdrop. The clear focus through to the early 2000s was on film and while it had the digital technologies in-house, the real money was being made selling compact and bridge cameras. VISION 75 essentially killed off film production as a major business segment, along with the S Pro range of Nikon bodied DSLRs, although it left the cash cow that was compact cameras.

The question that vexed the company with a proud camera heritage was how it should develop an interchangeable lens camera. The pregnant pause that VISION 75 created saw Olympus and Panasonic market the mirrorless camera in 2009; two short years later the world was introduced to Fuji’s vision for a retro-style digital future: the X100.

This was well-received, with praise for the combination of retro looks, image quality, and size (a result of the small APS-C sensor). It’s hard to know whether Fuji was testing the waters, whether an interchangeable lens camera was planned, or whether APS-C was a firm design choice; either way, the release of the X-Pro1 in 2012 (and X-Trans sensor) changed the camera world. Fuji was back.

Five years later it again surprised pundits with the release of the second-ever medium format mirrorless camera — the GFX-50S — with a relatively modest sub-$10,000 price. Fuji’s pitch is that full-frame is the worst of both worlds; if you want great image quality in a svelte camera, go for the APS-C X-Series. If you are serious about image quality, the medium format GFX is the answer.

Significant numbers of photographers clearly agree with Fuji as, by 2019 it was ranked third in mirrorless sales, shipping some 500,000 units. Clearly, it won’t be troubling the likes of Sony or Canon anytime soon, but it is out-selling both Olympus and Nikon.

All of this hides the rather large film elephant in the room and there are two key numbers to highlight here. Firstly is that of the 13% of turnover from Imaging, 9% comes from film (principally Instax, instant photo systems, and minilabs) with only 4% coming from digital. Secondly, in pre-COVID 2019, Fuji sold 10 million Instax cameras. Yes, you read that right, Fuji sold more instant film cameras in 2019 than the entire digital camera industry (excluding smartphones).

It’s worth remembering that Instax’s success hasn’t been instant: the Mini 10 arrived in 1998 and in 2002 Fuji sold one million cameras. By 2004, this imploded to just 100,000 units as the digital pivot took hold, however, Fuji’s revival saw those numbers grow to 5 million units in 2016 and 10 million units in 2019. This is a “pile it high, sell it cheap” mentality (the cameras sell for around $100), but the profit is made on the back-end film sales.

The Future of Digital

Strangely then, the success of the Imaging Division is largely because of film. In fact, Fuji’s digital cameras may actually be making a net loss with film sales cross-subsidizing their development and production. More pertinently, Fuji has provided Nikon with a sage lesson in how to do business.

Its income collapsed with film and the solution was to restructure and diversify into related markets that were both consumer and business-facing. This is the painful process that Nikon is now undertaking; Nikon should have identified this single point of failure earlier and pivoted under less stressful conditions, a situation that both Canon and Sony have avoided.

What is important to remember is that camera history is unique and it doesn’t repeat itself. Since the birth of the Lumix G1 in 2009, the camera industry has taken 10 years to gestate into the mirrorless market we now see where there is a single direction of travel. This opportunity won’t arise again and early innovators have lost the initiative, ceding significant ground to Sony. Canon has bounded into the melee with full force, Nikon stumbling in behind, having lost momentum.

In this new world, Fuji has been plowing a steady furrow, offering a singular vision for the future that is different from everyone else. And that vision offers a fast track to film, alongside a choice between APS-C and medium format.