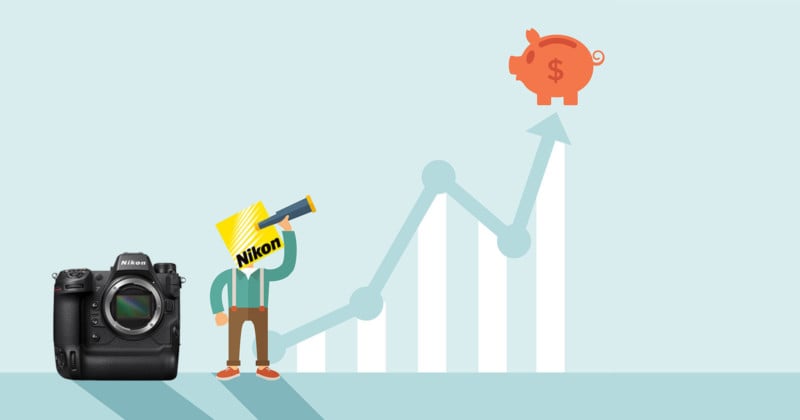 Nikon seems to have put the bad days of 2020 behind it and is accelerating into a new business positive future in which its Imaging Division plays a significant, but not central, role in its financial stability.

Crucially revenue from Imaging is on the up and looks to be returning to near-parity with 2019, along with a subtle shift in Nikon’s underlying core strengths. The question then remains: what does the future hold for its Imaging Division?

Nikon spent the latter half of the 2010s in desperate straights as the rug at the core of its business — cameras — was pulled out from under its feet as sales of DSLRs imploded and Canon’s dominance marched on. The company released a medium-term strategy with the dual aims of making Imaging profitable again and expanding the strength of its other divisions.

Imaging needed some fairly heavy-handed management in order to get its shop in order and this was manifested in the form of factory closures (laying off some 2,000 staff) to remove surplus manufacturing capacity while at the same time optimizing the location of its factories. These moves resulted in an eye-watering ¥30 billion ($260M) impairment loss that — now that it’s been through the books — is no longer a barrier to developing the business anew.

To get to this point, Nikon had to do some serious navel-gazing and then strategizing. Those outward physical changes to the business were the result of a complete pivot in how it viewed the camera market and led to a laser-like focus on the mirrorless camera. First to go was the 1 System, closely followed by almost all compact cameras. These were expensive forays into diminishing markets. The DSLR and F-mount have been all but dumped, leaving Nikon to design the Z-system, bring it to market, and begin filling out the range.

And then COVID happened. In one sense you could argue that all businesses have stalled as a result of lockdown and component shortages, but they haven’t all stalled equally and Canon appears to have benefited more than others, helping it to increase its market dominance. Nikon has seen its Imaging Division bounce back recording healthy sales and strong profits, just not as healthy as Canon.

In the short term, it is clearly important to be making money, and Nikon is doing that. However, in the medium term, it is more about understanding the scope and extent of the overall camera market and then appealing to consumers in order to retain significant market share. Market share is critical because a business can only sustain research and development above a certain threshold, and it would seem likely that Nikon hasn’t reached that bar yet. It has only captured 13% of the ILC market and looks to be dropping share in both DSLR and mirrorless segments. All of this means that although making money is good, Nikon needs to be selling more cameras for its long-term survival.

A Glimpse Into Nikon’s Medium-Term Strategy

Given this backdrop, the release of Nikon’s latest Medium-Term Management Plan (2022-2025) is instructive for understanding how it is responding to the current challenges it faces. Before you can do that, you need to wade past the corporate double-speak where you think you know what something means, then discover it might actually mean nothing at all. I challenge you to better understand Nikon by knowing that its corporate philosophy is “trustworthiness and creativity” or that its corporate vision is “unlock the future with the power of light.”

The financial target set (by 2025) in the medium-term strategy is actually quite sobering: return revenue and profit to where it was in 2019. The combination of COVID and pivoting to the Z-system will have cost Nikon six years of business. Of the ¥700 billion in turnover, the expectation is that ¥200 billion will be coming from Imaging and ¥300 billion from Precision Instruments, with the overall business yielding a 10% profit.

Remember that Imaging accounted for 33% of revenue last year (down from 75% in 2013) and is the principal source of Nikon’s problems; the unwritten mantra to address this is “strengthen and diversify”. Precision Instruments is now the largest division accounting for 41% of revenue, but Healthcare (14%) and Digital Manufacturing (12%) are significant components.

The first of these — strengthen — applies to Nikon’s core businesses (Imaging and Precision Equipment) that have fallen back as a result of COVID, but have different priorities. Precision Equipment needs to expand the lithography business (flat panel and semiconductor) to new customers for what is a rapidly developing business-to-business (B2B) sector. Crucially, being B2B, it doesn’t suffer the frailties of Imaging with its consumer-facing market. The priorities for Imaging are very different: it still needs to become profitable. Progress in 2021-2022 has been good with a return to operating profit, however as I’ve noted above, this has to be tempered by the low market share the Z-system currently has.

Nikon is surprisingly candid about increasing revenue through a two-fold approach: increase prices and sell more lenses. It has set itself a target of increasing the average selling price by 20% (which would take the Z9 over $6,000). If you think this is hard to swallow has the cost-of-living skyrockets then you would very likely be right, but given the impact of inflation across the board, that 20% may actually need to be higher.

Nikon also wants to achieve a “lens attach rate” (the ratio of lens sales to camera sales) of at least two. That means selling two lenses for every camera sold. This is perfectly achievable, as its estimate for 2021 to 2022 is 1.75. However, the situation is a little more complex as that figure combines both DSLR and mirrorless models. Given the focus on mirrorless, it needs to control the implosion of DSLR sales (and presumably lenses, although that is likely to be more stable) while trying to increase its mirrorless market share, central to which is a diverse lens lineup and subsequent sales. Central then, is its stated target of over 50 different Z-system lenses by 2025 (from the 29 currently listed).

It also pushes out the same old trope of a declining camera market, increasingly made up of professional and “advanced” amateurs who are presumably happy to pay higher prices for their cameras. It does see video and remote capture as markets that it needs to appeal to, along with a move into the service sector through content creation focused around 3D/360 and VR/AR.

The second principle — diversify — actually comprises two elements: diversity of market segments and diversity of customers. By diversifying across markets it spreads the risk of market exposure ensuring that the business has a sound foundation, however by also shifting from end-user products to both business integration systems and components, along with service provision, it can also broaden who it supplies. Nikon sees its remaining divisions (Healthcare, Digital Manufacturing Nikon, and Components) as areas of strategic growth that (as the graph below shows) can yield higher profit margins.

So where does this leave Nikon? First and foremost, it has an expansion plan for its businesses outside Imaging. This is critical to its financial security and, so far, development into these new areas has been successful. This is something that both Canon and Fuji, for example, have been through, making them much more secure.

We know Nikon is headed in this direction because it flat out told Bloomberg that it is looking to reinvent itself beyond cameras as a general tech supplier, reorienting its business model to supply parts, tools, and services to other businesses as a priority over its household name as a camera manufacturer. It doesn’t plan to leave the camera industry by any means, but it does plan to make its overall business less reliant on it.

With this in mind, expect to hear more about Nikon’s ventures into other markets, like its recent announcement that it would be building a 3D virtual reality studio in partnership with Microsoft.

For Imaging itself, the takeaways for photographers are more profound. Firstly, Nikon is pouring research and development into establishing the Z-system as a world-leading system that is designed to last as long as the F-mount. That should reassure consumers who are looking at the brave new mirrorless world.

Secondly, expect camera prices to go up and not just by a little: 2022 through 2023 could see increases by as much as 25%. Whether that will be applied by all manufacturers across the board remains to be seen, but there is no doubt that everyone is being squeezed. Thirdly, Imaging is back in profit which must be a relief for Nikon. However, the warning remains: Nikon has a low market share. For this reason alone, 2025 could be a line in the sand for Nikon.