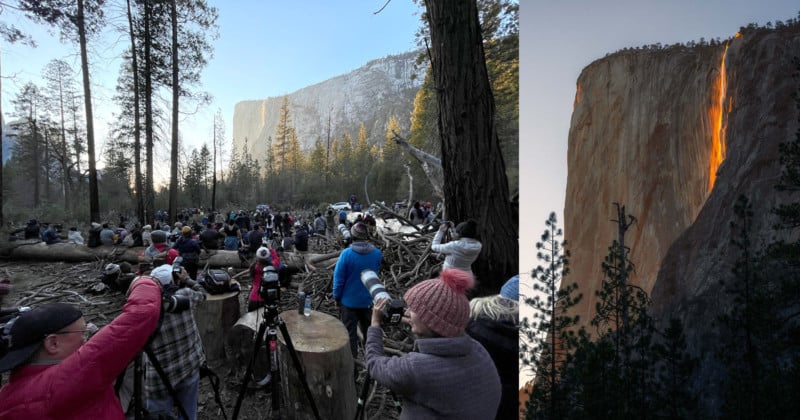 As a landscape photographer attracted by rare and spectacular natural events like active volcanoes, eclipses, or solar storms, the Yosemite Firefall has been on my photography bucket list since a long time ago.


This year, after reading the great Yosemite Firefall guide that photographer Dave Koch recently published, I felt encouraged to travel to the park and give it a try.

It turned out to be a show full of lights and shadows, not only in the Yosemite granite walls but also in the Yosemite Valley in general, with the worst crowds that I’ve ever seen in the park. In this article, I’ll tell you everything about my experience capturing the Yosemite Firefall, including the good, the bad, and the ugly!

What is the Yosemite Firefall?

First of all, in case you didn’t know, Yosemite Firefall is a natural phenomenon where the sun illuminates Yosemite Horsetail Falls, creating a “fiery” effect mainly during the last two weeks of February. To see and capture this phenomenon, you need particular conditions, like 100% clear skies, enough snow on top of the mountain, and warm temperatures to melt the snow and create the waterfall.

When all conditions align, you can see something like this:

If you want to know more about what causes this natural show, when it happens, where you can see it, and how to plan your trip to enjoy it, I strongly recommend reading Dave Koch’s Firefall guide, which explains everything thoroughly.

The Good: My Experience Photographing Firefall

I wasn’t very hopeful for this year’s show since the primary condition to create the waterfall, snowfall during the winter, hasn’t been significant this season except for a big snowstorm last December. On Saturday morning (02/19/22), the first thing I did was scout the area around the waterfall view looking for compositions, and my worst expectations were confirmed when I saw the falls dry.

The skies were 100% clear, so I decided to give it a try anyway. I packed my camera gear, walked to my viewing spot, and waited. Once in location, I was surprised to see that actual water and mist were falling off the mountain! The ranger explained that it had been a super warm day, and it had been enough to melt the snow and create the waterfall. I sat back and enjoyed seeing how the sun was slowly going down, painting the giant Yosemite walls.

At about 5:20 PM, I started seeing how the light was closing on the waterfall, and the color was changing to a more orangish tone. Five minutes later, Yosemite Firefall was alive!

The following 10 minutes were truly spectacular. It was beautiful with the naked eye, but the real show happened when looking through the telephoto lens. It seemed as if real lava was falling off the mountain, with the mist changing colors and moving up and down off the east face of the famous “El Capitan.”

For the shooting, I was using a Sony a7R IV and Sony Alpha 1. My lens choices were the Sony 24-105mm for a wider field of view, the Sony 200-600mm for the general images, and the Sony 1.4X Teleconverter to capture some details.

Most of the images that I had seen showed a complete picture of the falls, but I also wanted to capture some details of the upper section, as you can see in the image below:

Using the telephoto, I also captured some abstracts of the textures and changing colors of the granite wall:

Before the show ended, I captured a small clip so you can see how it looks like natural lava falling off the mountain

Apart from the natural show and the images, I met a lot of photographers and spent the time before the shoot talking, sharing photography, and having a lot of fun. Everybody around seemed to be in a festive mood.

However, it’s not all roses about Yosemite Firefall…

The Bad: The Crowds at Yosemite Firefall

There is only one word to describe the crowds in Yosemite Valley during the Firefall: Insane!

It was a very popular event, and I knew where I was going, but the crowds, noise, and, especially, the traffic, were far worse than I expected.

Driving was probably the worst of all. I entered the park on Friday night with no problem, but some colleagues spent 3+ hours at the entrance of Yosemite just to access the National Park, some of them missing the actual show since they couldn’t find a parking spot in time.

Driving inside the valley was a nightmare. Short trips that usually take about 10 minutes could take up to an hour. Rangers were trying to regulate the traffic, but the number of cars and people was so overwhelming that the waiting times were infinite.

And lastly, the biggest problem: parking. Right now, the only accessible and good viewing area permitted in the Valley to enjoy the event is around the Northside Drive in a stretch of about a couple of miles. This makes the Yosemite Falls Parking lot an authentic zoo where finding a parking spot is more complicated than in any major city in the world.

The parking issue, however, doesn’t end here. The park is so crowded that any of the parking lots to visit the popular park locations like Tunnel View, Valley View, or Mirror Lake, are always full.

Lastly, any amenities in the park, like having a simple breakfast in Yosemite Lodge, were also full since right after sunrise and the lines were endless.

We have to consider that all this happened during the prime Firefall weekend. I am sure that the situation is not as bad during the weekdays, but bear in mind that, regardless of the day, this is not the time of year to chill and relax in the park.

The Ugly: Yosemite Firefall’s Impact on the Ecosystem

With this massive flock of people, the impact on the Yosemite Valley ecosystem is inevitable.

Two of the three best Firefall viewing areas across the Merced River have already been closed during the event due to the damage to the soil that was caused by thousands of photographers standing on the fragile soil. There was even a landslide of part of the soil back in 2019.

It’s easy to find lots of trash and plastics on the main viewing points of the El Capitan Picnic area. Cars are parked in illegal zones, sometimes in the soil outside the parking lots and on top of the roots of the trees. And even though it’s not so evident, so much noise and crowds must have an impact on the wildlife ecosystem in the Valley.

What’s the Solution to the Firefall Impact?

There’s no easy way to fix this beyond more education and respect for the natural system in the Valley.

However, even with this awareness, it’s inevitable that a ridiculous amount of people like this have an impact on the place. I’m not sure how the National Park system will handle this in the future, but I have no doubt that there will be some kind of limitation like a permit or lottery system as it happened with the COVID restrictions during the 2021 Firefall event.

Summing up, if you asked me… is the Firefall worth it?

I would say absolutely yes! It’s a spectacular natural show. However, I would strongly recommend not visiting it on the weekends and, it goes without saying, paying the utmost respect to the current regulations for parking and staying as stipulated by the National Park Service. Always leave it better than you found it.

Yosemite is an incredible place where you feel tiny. Firefall or not, it’s a park full of history and beautiful scenery that any landscape photographer should visit at least once in a lifetime! 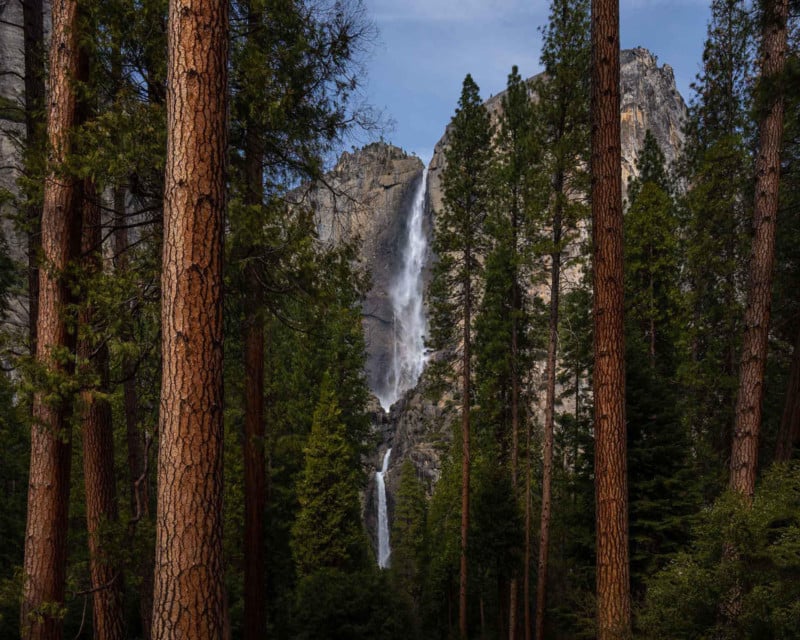 Image credits: All photographs, unless otherwise indicated, by Dan Zafra.