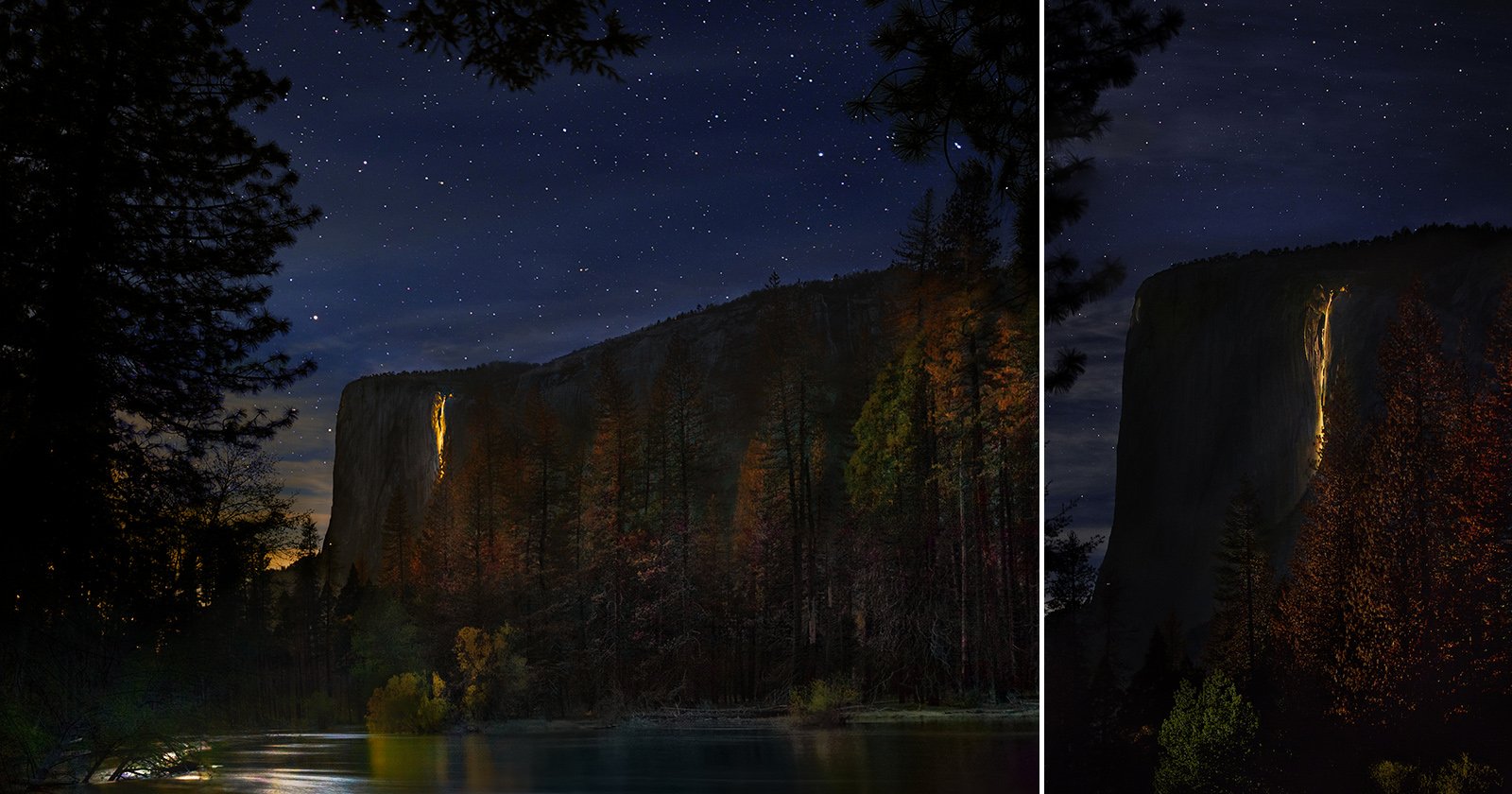 This is the famous and elusive Horsetail “Firefall” in Yosemite National Park, but unlike every other image you may have seen—taken near sunset around February—the fire effect in this image is caused by moonlight. That’s the only possible way one could see the firefall and stars at the same time.

How does the firefall effect happen in the first place?

Before we dive into the moonlit firefall, let me quickly explain how the more popular firefall event works—that is, the one driven by direct sunlight during sunset.

Basically, it’s a rare event that happens only on specific dates at sunset, when the sun’s rays hit only the thin area on the El Capitan walls right behind Horsetail Fall. This light reflects right against the waterfall, making it look as if the water is red or golden in color… almost lava-like. Several things must come together for a firefall to form, though.

1. The sun must be in the right place at sunset, something that only happens for a couple of weeks in February (also in October, but the fall always dries up much earlier than this).

2. The skies must be clear, especially the western horizons, so the sunlight isn’t blocked.

3.. It must have also snowed enough that winter to build a decent snow pack, which is what triggers and feeds this waterfall, and it must be warm enough for that snow to melt.

And even when all three of these factors come together, you still need to find a decent vantage point among hundreds of other photographers. It really is a popular event that draws large crowds. As for the effect itself and its game of light and shadows, the following illustration should be self-explanatory. (Note that the outlines—both red and yellow—are only approximate). 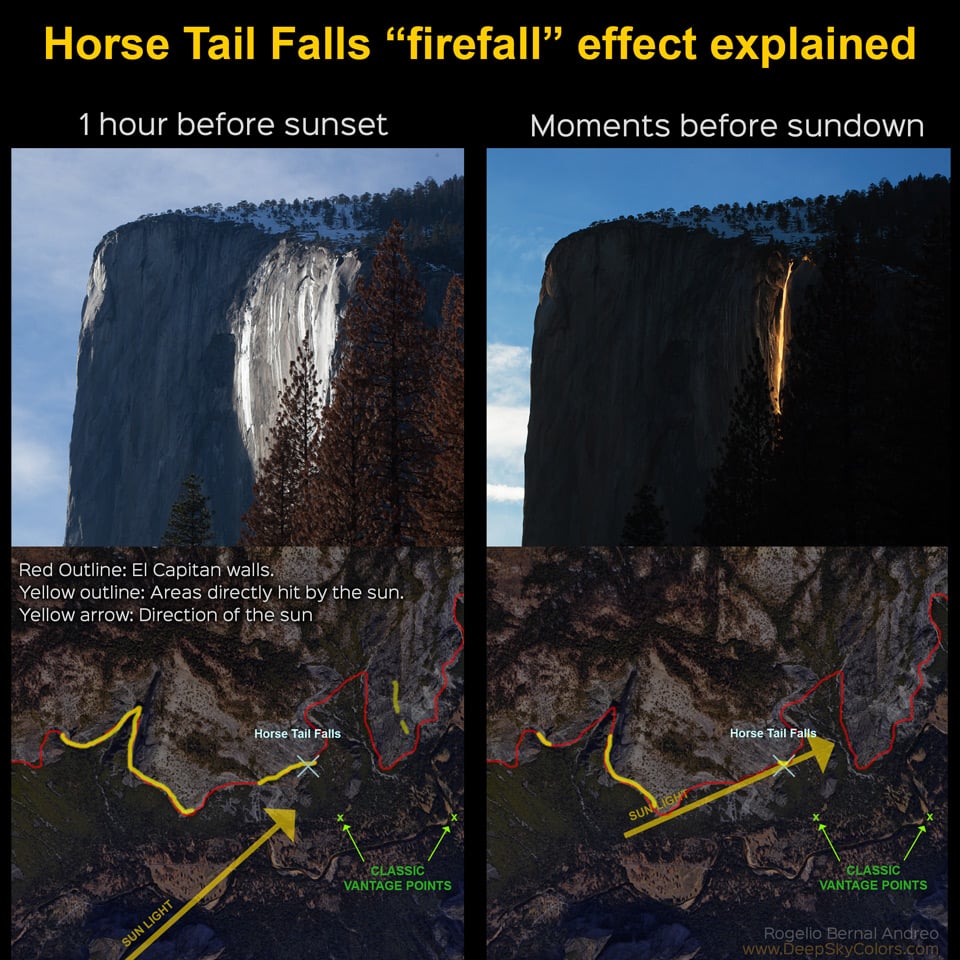 But if you think the Horsetail Firefall that happens around February is famous for being elusive, try shooting the moonlit one!

What does it take to capture the Moonlit Firefall?

As with the firefall effect caused by the sun in February, the moonlit firefall only happens a handful of times a year—sometimes not at all—and it has to be precisely timed. Beyond this, the effect is exactly the same: same reasons, same logic, and nearly same experience as far as the firefall goes.

Of course, the experience of witnessing it under a starry sky is wildly different than at sunset.

So, what does it take to capture the Moonlit Firefalls? You need to find a night when the moon is in the right place near moonset and is bright enough—more on that later. As I mentioned, there’s only a handful of such events per year, maybe 1-2 nights only, some years none… and the fall must still be pouring water, of course. Since the fall usually dries mid-late spring or early summer at best, anytime after June is probably wishful thinking. June itself is a stretch.

Of course, the sky needs to be clear near the west, so the moonlight isn’t blocked by clouds. It’s good if it’s also clear to the northwest, unless you’re okay with the sky being cloudy (you’d miss the starry skies).

Lastly, this point might sound trivial but it’s not: you must be able to take the trip. For me, as you shall see, it was a killer doing it mid-week: an 8 hours round-trip, at odd hours, tired… nevertheless, it was so worth it!

How I captured these two images

This much more elusive firefall driven by moonlight is not completely unknown, but not many people know about it and there certainly aren’t many shots of it. In this case, I had already been mulling about the idea, not entirely sure it could be done, but certainly interested in finding out.

Then Tunç Tezel, a photographer from Turkey, brought it up on a Facebook post of one of my (sunset-driven) firefall shots:

“You should consider shooting a moonlit version at bronze hour, too.”

Tunç and I continued the discussion offline, figuring out the dates. That’s when Tunç pointed out the dates of May 8th and 9th as possible candidates this year, which I confirmed. Tunç continued his calculations, predicting a bad “Moonlit Firefall” year for 2018 and 2019, probably not improving until 2022.

This is not to say it will be impossible to capture another moonlit Firefall until 2022, but that conditions will not be “perfect”… just “good enough”.

I had been waiting for these two dates, May 8/9th, since February when Tunç and I talked. By May 5th, I was watching the forecast slowly destroy my chances—weather models were predicting mostly cloudy skies for both nights.

May 8th was the clear winner as far as the position and timing of the Moon. In fact, May 9th wasn’t really ideal, especially since moonset was happening nearly at twilight. Sadly, a cloudy forecast kept me home the night of the 8th. Then, out of nowhere, the forecast changed for the 9th to mostly clear skies! That’s all I needed to know. I headed to Yosemite the next evening.

Moonset that night was between 4:30am and 5am, so I headed to Yosemite around 9:30pm. It’s a three and a half hour drive under good road conditions, and that’s how long it took me to get there. Fortunately, the weather gods were smiling down on me: the skies were clear when I arrived, and the big, bright Moon was up high. I looked at it, thinking “Are you going to put on a show tonight?”

I took a couple of runs with the car around the valley—always amazing under the moonlight!—and also (re)scouted the two classic vantage points for the firefall, trying to decide which one to use. In the end, the point by Southside Dr. won, as I could do both a close-up and wide shot of the event (if it even happen).

As I arrived at the spot, I was ready to perhaps see a couple of cars. What I found instead was… not a single soul. No complains there, though I admit I mumbled a, “Oh, that’s interesting” as I noticed I’d likely be all by myself. (I later found out the “action” that night was at the lower Yosemite Falls with several folks trying to capture a moonbow).

The whole place was actually a swamp, and the area where, a few months earlier, about 100 photographers gathered to do the sun-driven firefall was entirely covered in water.

If you’ve been there, you know the area where you can get a clear view of the firefall is rather narrow. This unexpected flood actually limited my options even more than in February with the crowds. I did eventually manage to find a dry spot that, although it didn’t give me a complete open sky view, was really the best I could find.

By this time it was around 3am, and I was supposed to be tired (up since 6:30am the day before, 4 hours driving and whatnot) but this is when the adrenaline kicks in for an astrophotographer. Don’t ask me how that works, it just does. 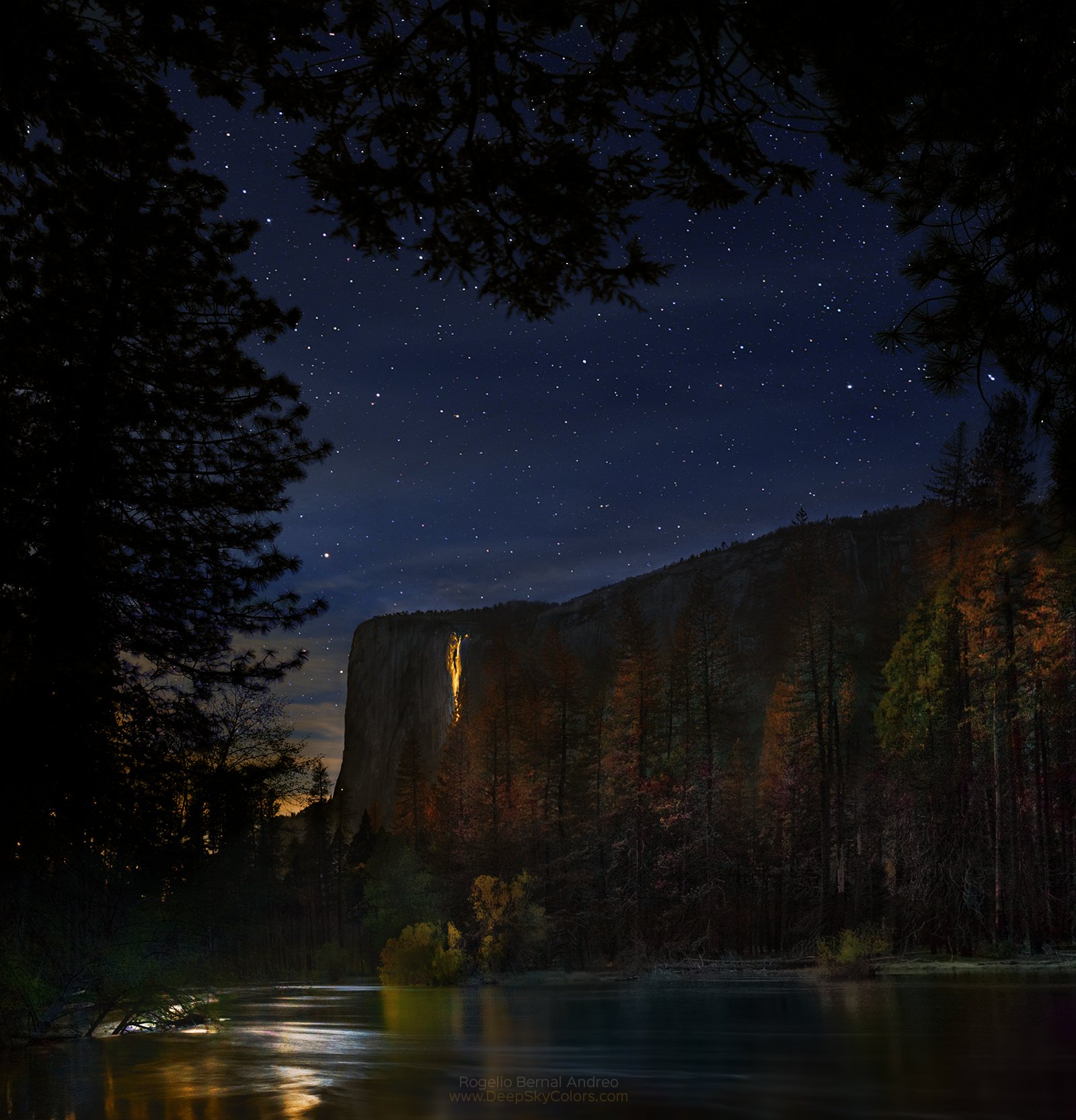 Still one long hour to go and suddenly, thin high clouds took over most of the sky. You could still see stars through the thin clouds, but I wasn’t thrilled. The Moon also contributed to a “whiter” sky, as the moonlight illuminated the thin, high clouds.

The good news was that the clouds were happening right above El Capitan, not low in the west, meaning the firefall effect would still happen.

I patiently waited while I enjoyed the solitude and the spectacle that only Yosemite Valley can offer. One thing the pictures don’t show is how the area being hit by the light starts to slowly narrow until only the firefall is illuminated. Shortly after that… it vanishes completely.

When the area was getting pretty narrow and the firefall effect was about to happen, I got into position and framed & focused the two cameras I had brought with me—a Canon 5D Mk2 with a 70-200mm f/2.8 lens and a Sony a7S with a Rokinon 24mm f/1.4. I started shooting as I dialed the settings, trying different things with the exposure and ISO.

132 shots later, around 4:45am, twilight started to kick in, brightening the sky, and I stopped. Slowly packed my gear and headed back home. Phew!

About the author: Rogelio Bernal Andreo (aka RBA) is an award winner astrophotographer living in California. In 2007, he started exploring astrophotography as a hobby and developed a personal style defined by deep wide field images that led to international recognition and a meaningful influence on the discipline.