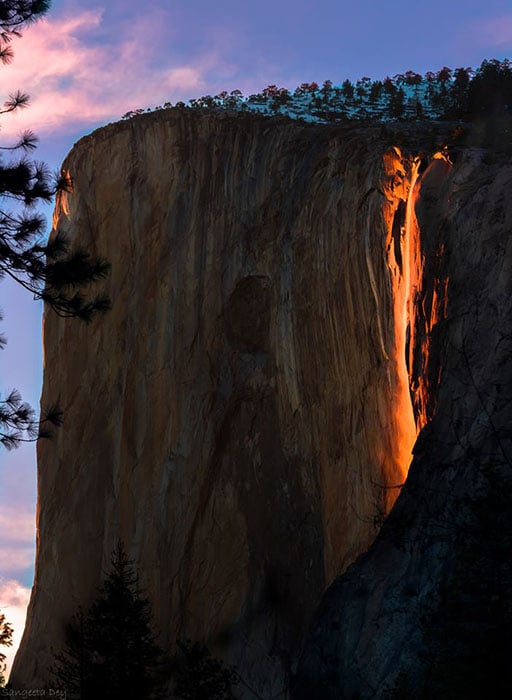 For a short time every February, when conditions are just right, Horsetail Falls in Yosemite gets transformed by a phenomenon known as “firefall.” When the sunlight hits the water just right, the waterfall looks like molten lava flowing down the side of El Capitan.

Photographer Sangeeta Dey was there to see and capture the firefall this year, and her above photo has been going viral.

“Every year for two weeks in February, the sun sets at a certain angle and illuminates the waterfall in luminescent orange and red, making it look like a fluid fire,” writes Dey, who also shares her work through Instagram and 500px. “I’ve met photographers who said that they have been coming for 11 years only to see this happen 2 or 3 times.”

“When the fall started glowing, I couldn’t believe what I was seeing,” she says. “For 10 minutes, all of us sat there mesmerized by this spectacle. When it ended, a few of us had tears in our eyes. Some people were clapping. And others were just ecstatic to finally get a chance to see it after trying for years.”

The US Department of the Interior shared about the phenomenon today as well through Instagram:

For a short time in February — if the conditions are perfect — #HorsetailFall at #Yosemite National Park in #California looks like lava falling down the side of #ElCapitan. Visitors flock to the park every year to see this phenomenon, which happens when #sunset hits the #waterfall at just the right angle, illuminating the water in brilliant reds and oranges. It’s a spectacular sight reminiscent of @yosemitenps's historic #Firefall! Photo from February 13 courtesy of Jason Shaw (@ufjason99).

Do a search for #firefall on Instagram, and you’ll find many other people sharing their snaps of the beautiful sight:

Interestingly enough — and this is unrelated to photography — there was actually a different event called the Yosemite Firefall that started back in 1872 and continued for nearly a century. For that “firefall,” people spilled burning hot embers from Glacier Point in Yosemite onto the valley floor 3,000 feet below, creating what appeared to be a glowing waterfall when viewed from a distance.

Update: We originally stated that the historical “firefall” involved spilling embers into a waterfall in Yosemite. It was actually spilled off a cliff, and there was no actual waterfall involved. Thanks for pointing that out, Eric!

Adams, Lange, and Miyatake: 3 Photographers and 3 Views on Japanese Internment

Why Some Canon Lenses Are White Instead of Black