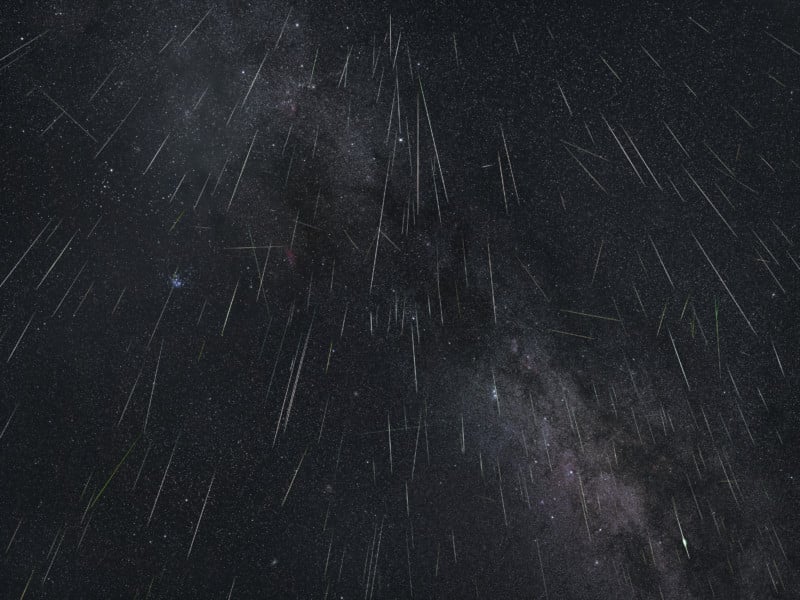 In December of 2020, scientist and photographer Nathan Myhrvold captured over 100 meteors from the Geminids along with five other showers with a custom-designed, four-camera panoramic system. Afterward, they were animated together to show how they fill the night sky.

From Snowflakes to Stars

PetaPixel readers might remember Myhrvold from when he photographed the highest resolution photos of snowflakes ever captured. While this subject is very different from the night sky, Myhrvold says they do have something in common: impermanence.

“Snowflakes are very small, so you need a microscope to photograph them. They’re also very fragile so they don’t last very long. The sky is full of all sorts of astronomical phenomena,” he says. “A meteor is an example of a phenomenon that lasts even less long than a snowflake. It’s very dramatic, but over in a tiny fraction of a second.”

Myhrvold says that his recent work started with a desire to capture weather and eventually expanded to the night sky. He tells PetaPixel that he has been fascinated with astrophotography since he was a child with his first telescope, but it was only recently that he reignited that interest as a component of his nighttime landscape photography.

“When I take a beautiful landscape photograph from a remote place like Canyonlands National Park, I might be the only person seeing that exact view on that exact day, with the unique weather and lighting that’s there,” he says.

“But if you look up at the Orion Nebula (M42) or the great Andromeda Galaxy (M31), that’s something that everyone gets to see. But despite everyone seeing the same thing, we’re able to take quite different pictures of it because photography gives us sufficient options that we can impose our creative judgment.”

The Night of Six Showers

“Each meteor shower appears to have its meteors radiating from a single point in the sky, which is known as a radiant,” he explains. “During a new moon, in one of the darkest parts of Texas, I set up a custom rig of four cameras on December 13 to capture the Geminid meteor shower.”

While his goal was just one meteor shower, he got a lot more than he bargained for.

“When I was reviewing the final image, I noticed that in addition to the Geminids, which all appear to emanate from their point in the sky, I had also captured lots of meteors that did not originate from that radiant. Upon further research, I discovered that there were six meteor showers in early December when I took the pictures.

“The five other meteor showers happening that night were the Puppid Velids, Monocerotids, Sigma Hydrids, Comae Berenicids, and Leonis Minorids. Only the Geminids, however, were at their peak intensity. I frankly didn’t expect to capture any of the others, but because I had very dark skies and this incredibly sensitive four-camera array, I got a substantial number of meteors from all six showers. That’s why I named the photo Night of the Six Showers.

“I was unusually lucky in capturing these multiple meteor showers.”

The video, seen above, was created after Myhrvold put together the final image by a member of his team, Wayt Gibbs. Myhrvold says the video does a better job showing what’s going on when more than one shower is captured at once, which he says can otherwise be a little confusing.

“I never anticipated doing this because I never thought I’d capture more than one shower or, at most, a tiny scattering of others,” he says.

“I like taking panoramas on the ground for landscapes. Panoramas are typically done by taking a series of separate photos and stitching them together. You take those photos by moving a single camera lens to different positions,” he says.

“You can’t do that with a meteor shower. The meteors happen in real-time and they’re big — they might span across many of your shots. To get such a wide range of the night sky, I designed and built several camera arrays. They have between three and four cameras with 24mm lenses, set up to photograph simultaneously so that I can make a stitched panorama of a meteor shower or a star trail phenomenon. That allows you to really get a different perspective.” 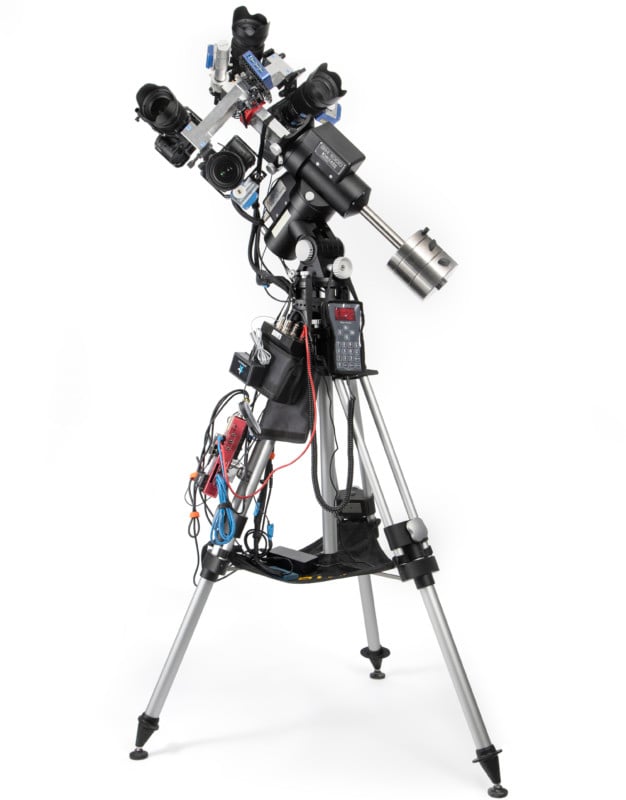 To capture the photo, Myhrvold used his most sensitive custom camera system made up of four Canon EOS R5 cameras. He says he designed the 2×2 array to have a field of view nearly as large as a single 20mm lens, but with significantly more sensitivity and resolution as well as less distortion.

“My most sensitive array, built to capture the Geminid showers, has four cameras, each with a 40mm Sigma f/1.4 Art lens. The cameras are arranged to give me some overlap and create a field of view that is somewhere between a 20mm and 24mm lens. The light-gathering power is about 16 to 32 times greater than what a 20mm lens would be because it depends on the square of the aperture,” he says.

“This higher sensitivity means that at the same ISO you can capture much, much fainter meteors and therefore a lot more of them.”

The system worked even better than expected and is the primary reason he was able to capture all six showers at once.

“An equatorial mount tracking the stars also yielded a sharp, highly detailed image of the Milky Way, the Pleiades (left of center), and even the faint red California Nebula (closer to center). After removing airplane and satellite tracks, SIRIL was used to align and register frames to place the meteor trails in accurate positions on the sky.”

Myhrvold says that one of his initial goals was to incorporate the Milky Way into his landscape photos, and while he’s started doing that, it’s still ongoing.