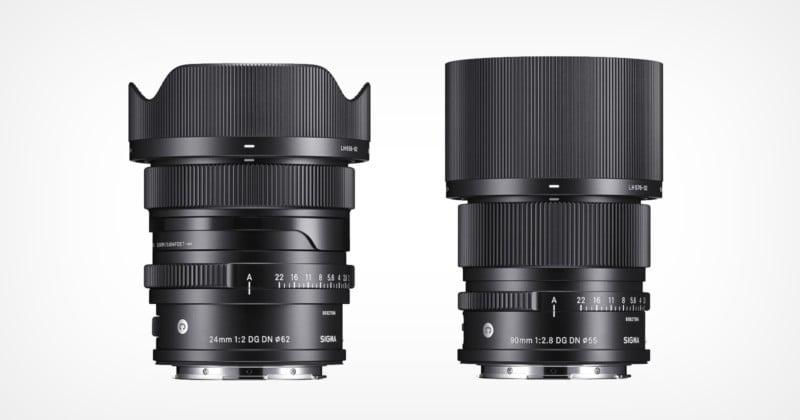 Sigma has expanded its series of primes categorized under its I-series line with the 90mm f/2.8 DG DN and the 24mm f/2 DG DN lenses. Both will be available in Sony E-mount and Leica L-mount.

“Built to the mechanical and operational standards of Sigma Cine lenses, in compact mirrorless form, the I series have outstanding feel and tone in the hand,” Sigma says. “The feel of the manual focus ring, aperture ring, and switches embody true functional beauty.”

This mid-telephoto length lens is the longest in the I-series but Sigma says it remains remarkably compact despite this and is fully optimized for mirrorless systems with a fast and accurate autofocus system, high image quality, and smooth bokeh. The bokeh is further enhanced thanks to the lens’s nine-bladed aperture.

The 90mm lens is 64mm (about 2.5 inches) in diameter and 59.7mm (about 2.4 inches) long and weighs 295 grams (about 10.4 ounces). The lens uses an all-metal construction using what Sigma describes as precision-cut aluminum.

It is constructed of 11 elements in 10 groups and that includes five SLD glass elements to reduce axial chromatic aberration to help it achieve high resolution and clear images with no color bleeding. It also has a single molded aspherical lens to again aid in the rendering of high-resolution images.

Sigma says that the lens utilizes the camera’s optical correction functionality, which it says is an advantage of mirrorless systems, so that its optical designers were able to concentrate on correcting aberrations that can only be corrected by the optical design, thereby improving rendering performance and reducing the size and weight of the lens.

The lens has a minimum focusing distance of 50 centimeters (about 19.7 inches) and a maximum magnification ratio of 1:5. The aforementioned high-speed autofocus system is made possible thanks to the integration of a stepping motor. The lens also has an aperture ring, focus mode switch, a magnetic metal lens cap, and is dust and splash resistant.

The 24mm f/2 lens is constructed of 13 elements in 11 groups which includes two SLD glass elements and one FLD glass element to correct axial chromatic aberration, which Sigma says is a particular concern with fast lenses. It also incorporates two high-precision glass-molded aspherical elements which the company says has enabled the total number of lens elements to be kept down and the size and weight of the lens to be reduced without sacrificing the ability to correct for those aberrations. The aperture diaphragm is made up of nine blades. 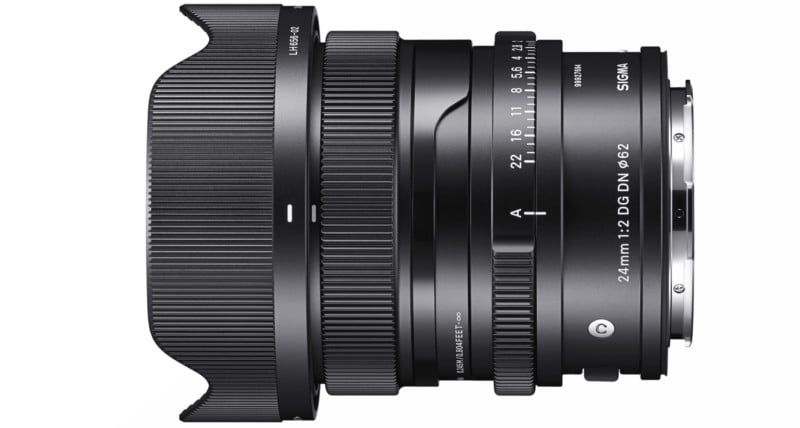 The lens has a minimum focusing distance of 24.5 centimeters (about 9.7 inches) and a maximum magnification ratio of 1:6.7.

As is the case with the 90mm lens, the 24mm uses a stepping motor for fast and accurate autofocus performance. Also like the 90mm (and all the other lenses in the I-series), the 24mm uses an all-metal, splash and dust-resistant construction. It should be noted that the same metalwork is used in Sigma’s cinema line of lenses.

The cover ring between the focus ring and the aperture ring has hairline processing that is also used for the rear cylinder of the Art line. This covering functions as a finger hold when attaching or detaching the lens.

Offered for L-mount and Sony E mount cameras, the Sigma 90mm f/2.8 DG DN and 24mm f/2 DG DN will each be priced at $639 and will be made available for purchase beginning in late September.