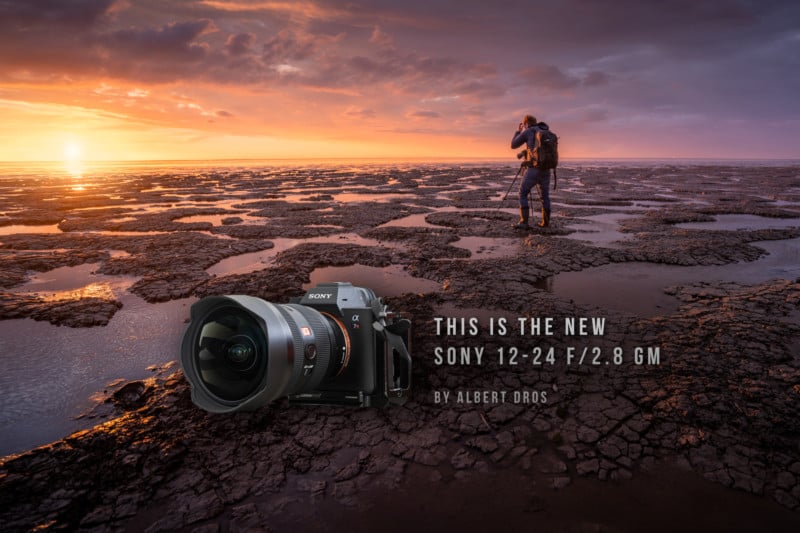 At some point, the 12-24 f/4 G lens came out. I was super happy with the release of this lens and was always enjoyed shooting with it. But it lacked something: speed. As I am always traveling around the world it’s important for me to have one wide-angle lens that can do ‘everything’, meaning shoot extremely wide, and also preferably f/2.8 (or faster).

The Sony 16-35GM is great, but I wanted something wider. Sony released a bunch of fast primes recently (with the newest one the 20mm f/1.8 that I really love) but I made no secret about the fact that I wanted something wider. At every Sony Event in Europe where I talked with the ‘big guys’ I always joked, “where is my super fast wide-angle lens? Why is it still not there?” I’ve done this for years and I’m sure everyone at Sony HQ knows me for it. That’s probably also why Sony called me a few weeks ago saying “we have something new for you to try.”

And there it was: the 12-24GM. Finally, Sony came up with the ultimate lens for me (on paper): an extreme wide-angle with an f/2.8 aperture. I don’t know if they made it just to stop me from bothering them, or if it was genuinely in their line-up (probably that). Either way, it’s finally here and I’m going to tell you a few things about it.

Full Disclosure: I am a Sony ambassador and was given this lens before the release and announcement. The lens was used on the a7R IV. This article is not called ‘REVIEW’ because I’ve experienced people didn’t find it ‘fair’ or reliable that I (as a Sony ambassador) would review Sony gear. That’s why this is simply an article by me to show what this lens can be used for and what it is capable of. So this is actually the widest full-frame f/2.8 zoom lens on the market right now. Most of the lenses on the market are 14 on the wide end, and not 12. Combine this with the f/2.8 aperture and I was thinking: this thing must be big and heavy. When I first got it I was quite surprised. Ok, it’s not extremely small of course, but Sony did an amazing job again in keeping it relatively light and compact given the amount of glass it carries. Because the front element is huge.

According to Sony, it’s the biggest front element they have produced—the lens includes 3 XA elements, one of which IS the front element. They also told me they designed a new Nano coating (Mark 2) specifically for the curvature of this lens to reduce aberrations and flare. Added coating on the front elements protects it from dust, liquid and marks. The AF consists of 4 XD Linear motors that make it really fast, smooth and silent.

As a landscape photographer I of course immediately think about filters. There are several filter brands that always make filter holders for custom front elements, so I guess we don’t have to worry too much about that. It’s going to be 150mm or even 180mm filters, would be my guess. But Sony apparently thought of this, as it’s possible to put filters on the back of the lens.

Sony included an outline mold (is that what you call it? template maybe?) with the lens so you can basically create your own filters in the right shape. I’m sure filter manufacturers will soon come up with a specifically designed set for this lens. Let’s take a closer look at the design of the lens. It has a similar design to other GM lenses: with the red GM badge, a premium matte look, 1 function button, and a designated AF/MF switch on the lens itself. The lens does not extend while zooming.

The weight of the lens is 847 grams. It’s not super light, but certainly lighter than any of the competition’s 14-24 f/2.8 lenses. And keep in mind, this lens is 12 on the wide end, and not 14. So Sony impressed again trying to bend the laws of physics by keeping this lens within proportions and weight. I certainly had no problem hand-holding the a7R IV with this lens and taking proper shots.

As you can see in the photos above, it doesn’t look particularly big. A nice size that feels right when holding.

I’ve had the lens for a couple of weeks now, and I managed to use it in a lot of different scenarios:

The conditions in the Netherlands were ideal the past few weeks, allowing me to use the lens in lots of different conditions and scenarios. In general, I was just so happy I could shoot at 12mm again with a fast, high-quality lens.

Let’s start with some narrow streets and canals in Amsterdam. 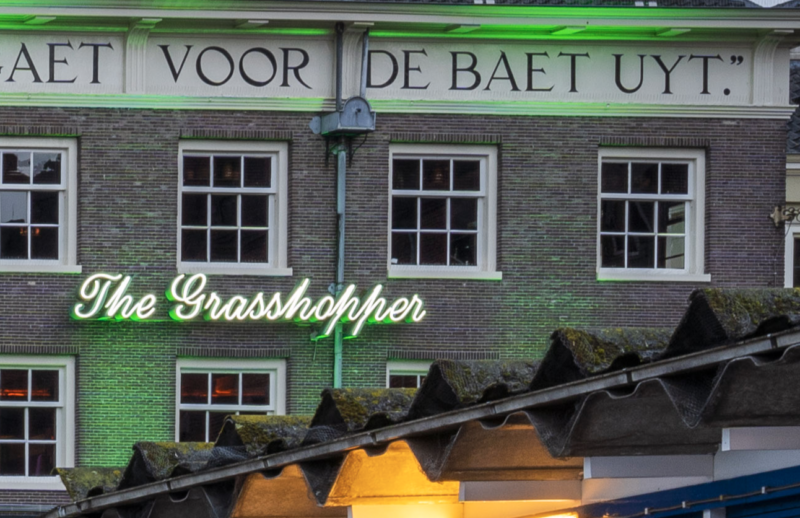 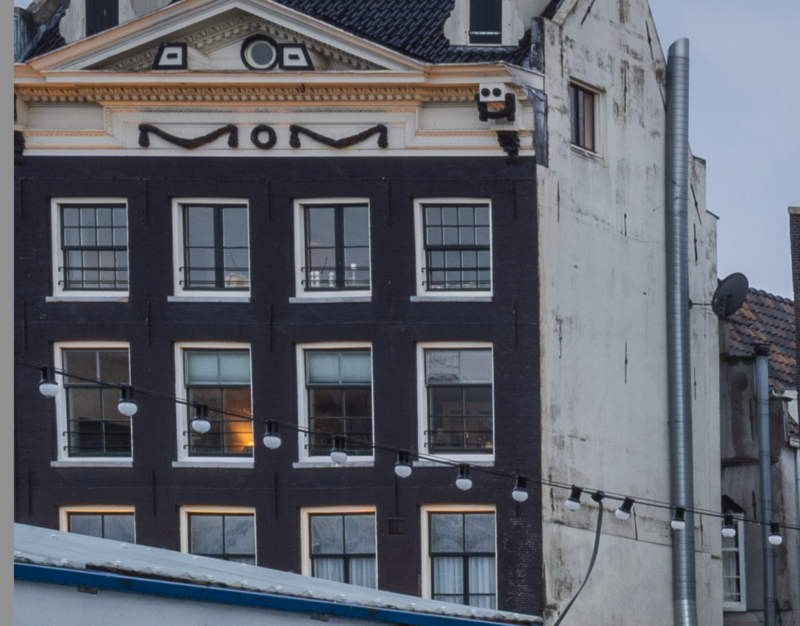 When we zoom in, we can see that both edge sharpness and corner sharpness are excellent at these slower apertures. On a side note: when I compared the sharpness of this lens to the 12-24 f/4 G, the GM is noticeable sharper.

This is a good example of an image where the 12mm is really utilized. To capture this whole corner of streets in the Red Light district in Amsterdam (that is completely empty and close because of COVID) you need a lens as wide as possible.

The sharpness and super wide lens works really well for these kind of cityscape images.

We had a lot of storms coming over the city that week, and the 12mm was perfect to capture all the drama in the sky.

For the image above, I took a quick panorama (hand-held). The incoming storm cloud exactly mirrors the small stream in the foreground. It looks like a fisheye perspective because of the panorama.

Storms were followed by nice sunsets around the canals.

Now I really like to use such a wide-angle zoom in the city. The 12-24mm range is perfect for most uses cases when you’re photographing the streets and buildings, especially in packed cities.

A wide shot of this beautiful corner reflecting in the canals in Amsterdam. The 24mm allows me to also capture a closer, slightly different image:

Now let’s take a look at some architecture using the extreme wide angle—here are some images of an apartment complex in Amsterdam, playing with different angles.

It’s always great fun to put the wide-angle in interesting corners and do creative compositions with such a wide angle. You start to see things you don’t normally see with your eyes. By looking on the live view and walking around, pointing up and rotating the camera, you always start to see interesting angles. The flip screen of the a7RIV definitely helps here.

These were all shot at 12mm: 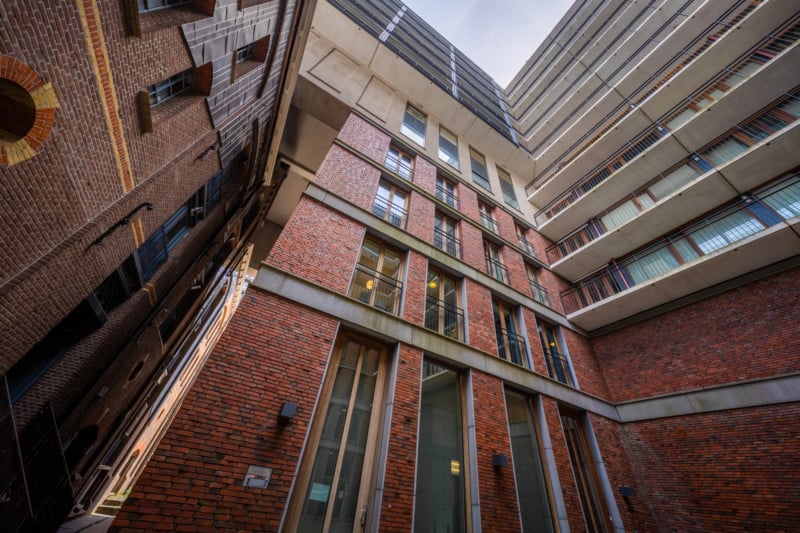 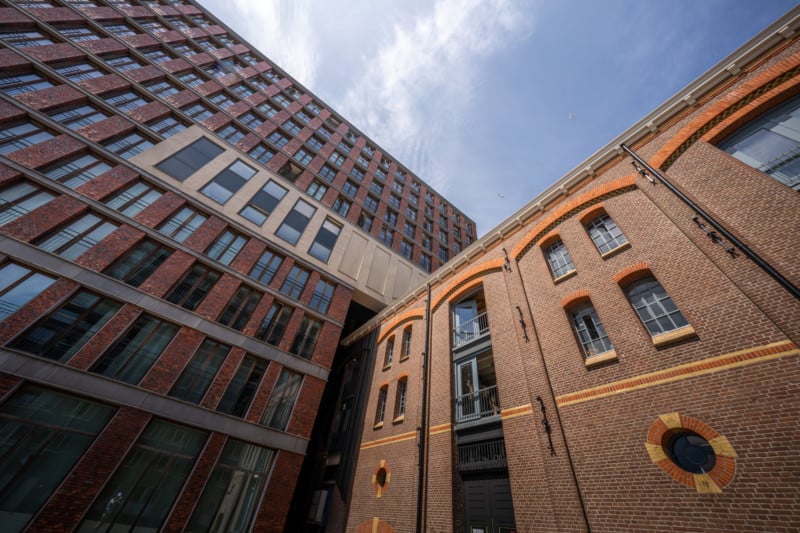 By playing with lines and shapes, you can make ‘ordinary buildings’ look spectacular in a photo. That’s the fun of playing with an extreme wide-angle lens.

But some buildings just look great by themselves. I took the opportunity to visit this beautiful town hall in Nieuwegein that looks very futuristic from both inside and outside. A perfect building to do some wide-angle shooting:

Now this week also had some beautiful mornings, so I occasionally woke up at 3am to capture the beautiful sunrises amongst the countryside, windmills and Dutch forests. With mornings like this you see the true beauty of the country.

A spectacular morning in the forest.

While a 12-24mm is not the ideal lens for the forest, forcing myself to use it certainly got me interesting results.

I occasionally use a technique called ‘focus stacking’ in which I get extremely close up to a subject and use multiple images with different focus points to get the whole image from front to back in focus.

You do this because if you get very close to a foreground, even f/22 will not help you to get everything in focus. 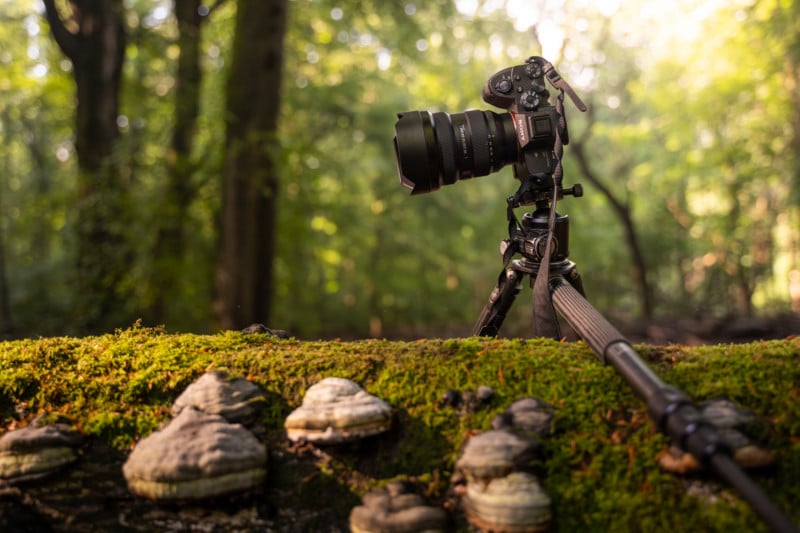 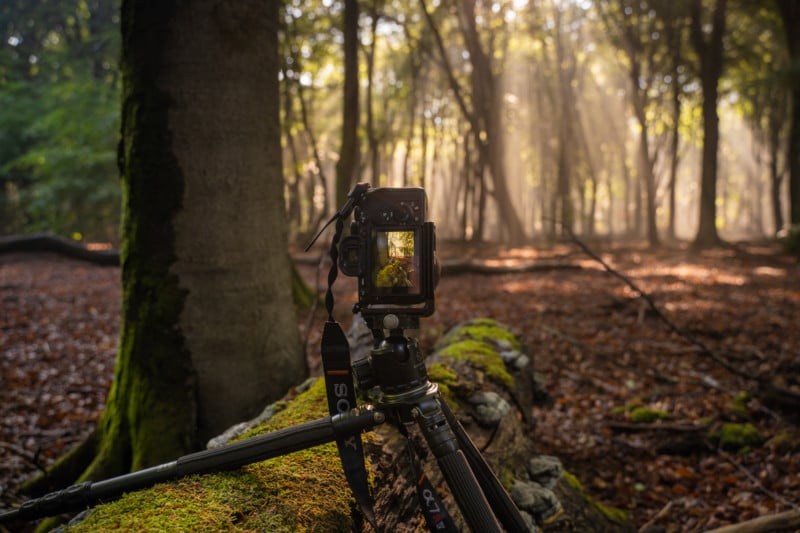 And the final shot: 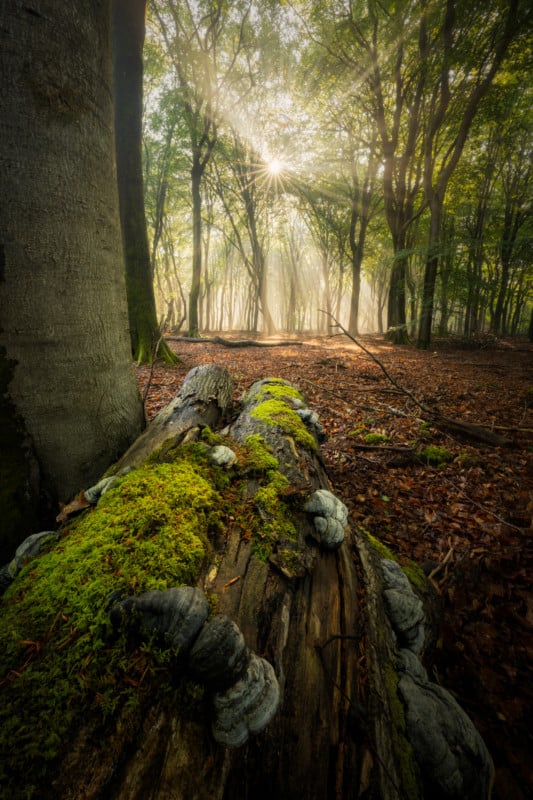 Here are a couple more examples of focus stacking using the new 12-24 GM:

Last but certainly not least, I was able to shoot some (faint) Milky Way images in the Netherlands.

Shooting the Milky Way in the Netherlands in general is almost impossible because of lots of light pollution everywhere, but there are some places where the light pollution is relatively low compared to the rest of the country. The other challenge was finding the right moment at night.

I captured these images (believe it or not) during the longest day of the year in which there is not even pure night. From 1am to 2:30am I had just enough darkness to capture these:

All of these images were shot wide open at f/2.8. I’m sure many people were waiting for an “all round” lens like this that capture every wide landscape including night scapes. And this lens does it well. Wide open at f/2.8 things look sharp and I was very satisfied.

Please note that the red orange glow on the horizon is not light from the sun. It’s light pollution from cities around.

I love using the sun as a compositional elements in my photos. Therefore I am always very critical at the so called “sunstar” of a lens. I was really, REALLY hoping that this lens would have a good sunstar—the 12-24 G has a sunstar that I’m not a big fan of, but the GM lenses are usually beautiful regarding sunstars.

This lens does not disappoint: it has a great sunstar!

At f/22 the sunstar looks sharp and crispy, perfect for my taste. But at different apertures it also looks great:

And while I was photographing in this area I also quickly checked out the bokeh of this lens.

Let’s be honest, no one is going to use this lens for its bokeh! It’s a 12mm wide angle beast :) But here’s one image anyway, and we can see that thing what the GM lenses are known for: even this lens has a nice Bokeh at f/2.8: 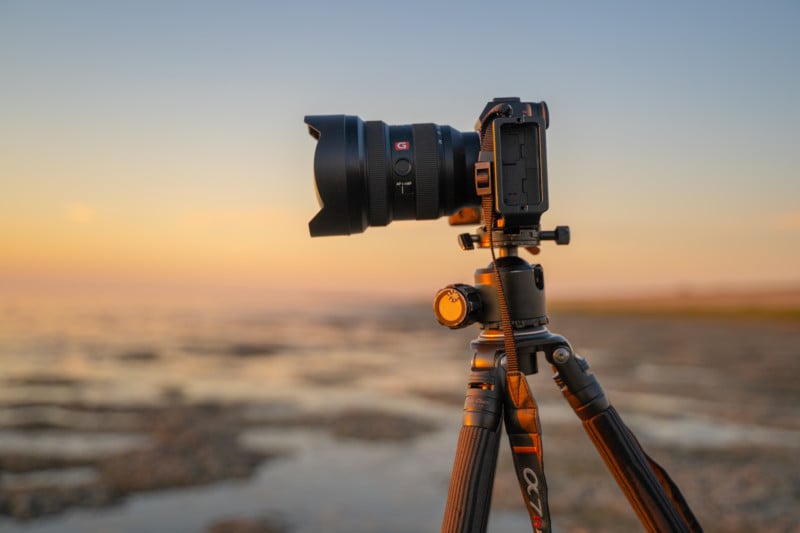 So is this the ultimate wide angle lens you can get for your Sony mirrorless camera? That depends of course on your shooting style. For me it’s definitely a yes. It’s a lens I have been waiting for for years and I am not disappointed, and super happy it’s finally here.

Thank you Sony! Now I have to think of new things to bother you with. 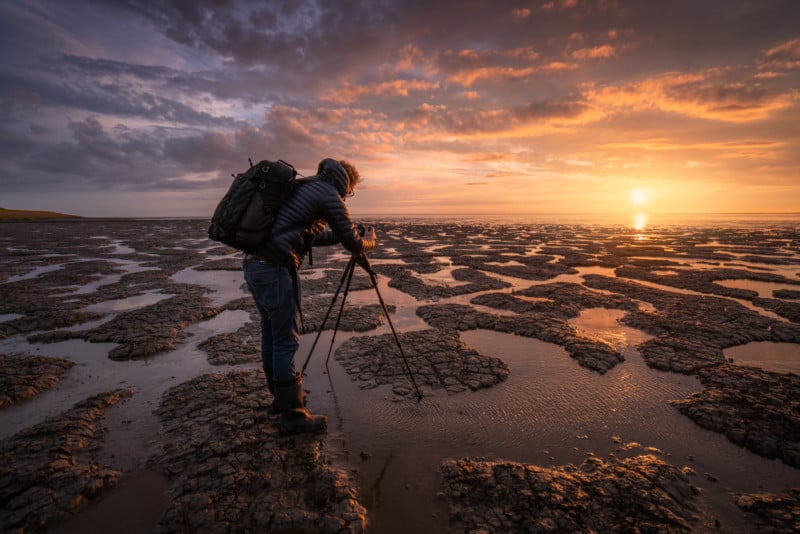 About the author: Albert Dros is an award-winning Dutch photographer. The opinions expressed in this article are solely those of the author. His work has been published by some of the world’s biggest media channels, including TIME, The Huffington Post, The Daily Mail, and National Geographic. You can find more of his work on his website, or by following him on Facebook and Instagram. This post was also published here.