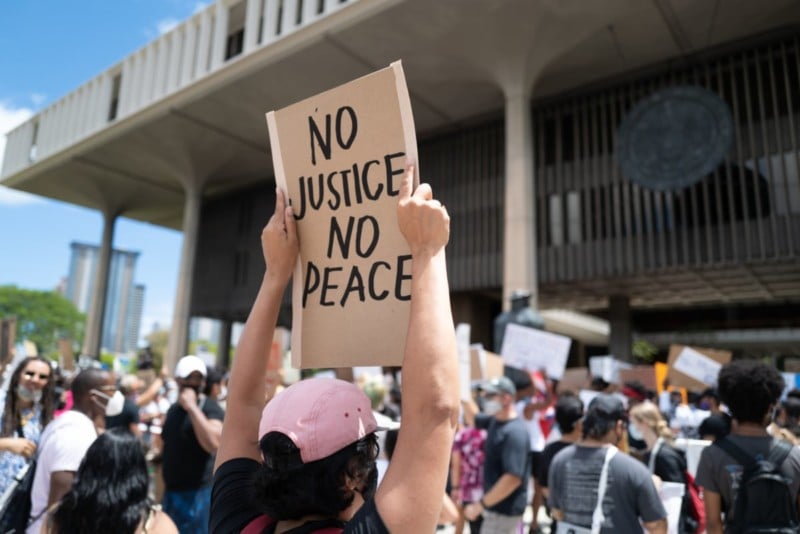 In the midst of global protests in support of #BlackLivesMatter, the Poynter Institute caused a ruckus within the photojournalism industry last week with the provocatively titled “Photographers are being called on to stop showing protestors’ faces. Should they?”

At least part of the outright dismissal of the article by some photojournalists stemmed from the second sentence which reads “But there’s a growing movement that calls for journalists and citizens to blur or not show protesters’ faces.” In the same week, the encrypted communications app Signal released a feature to blur faces in photos, which served to conflate journalism ethics with social media norms.

In this episode of Vision Slightly Blurred, Sarah Jacobs and Allen Murabayashi discuss the ethics of showing protestor faces, the 17-year old who filmed the killing of George Floyd, John Edwin Mason’s essay on protest photos, the controversy at the Pittsburgh-Gazette and more!

Tara Pixley, professor of visual journalism at LMU, explained to me via email, that no one in the article (including NPPA Executive Director Akili Ramsess and Columbia journalism professor Nina Berman) had even mentioned the idea of blurring faces. Pixley told me, “The article failed to acknowledge the various arguments around approaching protest photography, instead it’s relying on an argument of blur vs. not blur that was not supported in the quotes.”

To Pixley, who also serves as a board member for Authority Collective, the whole discussion around “to blur or not” is a distraction from a much more significant concern. “This is a question of how photographers should get CONSENT and make sure people they photograph know where the images of them might end up,” she said. And in fact, she opposes the blurring of faces.

On Facebook, Pixley further added that the discussion “should be about our ethical, critical and thoughtful approach to photographing vulnerable populations given the context of overt and expansive state surveillance that is often followed up with targeted harassment and discriminatory practices at the local, state and federal level.”

Given the preponderance of surveillance cameras in everyday life, some questioned whether the concern about LEO (law enforcement organizations) using images for nefarious purposes was really a threat. And indeed, in large urban settings – particularly those with massive police forces like NYPD – camera coverage can be significant. Pixley doesn’t suggest that police would only use photojournalism as a source to surveille, but as one of many sources to “help identify Black and brown citizens.” She points out that “there are dozens of news articles, academic research and nonprofit work around the pervasive and expansive use of various digital surveillance tactics by our government.”

Brent Lewis, Business Photo Editor at The New York Times and co-founder of Diversify Photo, worked on the Times’ story about Clearview AI – a particularly objectionable facial recognition database that scraped photos from social media sites of people not suspected of any crime and then sold access to LEO. Lewis told me, “I have seen what the technology can do, and it’s mind blowing.”

Nevertheless, he believes that showing faces is essential connective tissue for reporting. “But truly without the faces of the protesters, it becomes of a gathering of the faceless. A gathering of the nameless. And for a lot of readers and viewers especially in parts of the country and world might not deal with the issue of race and policing, might find it difficult to connect otherwise,” he said.

Prior to his position as a photo editor at the NYT, Lewis served as a staff photographer at the Denver Post, where it was newsroom policy that for “any group 3 and under, you need to have names and ages for all of them.” Like Pixley, Lewis emphasizes the need to humanize the subject, stating, “Protests can be a bit different and a lot more fast paced, but try. Not only in a constantly developing story like this one, it can let you know that you did your job, you got buy-in from the person being photographed and it can also open up conversations that can lead to having a better understanding and also new leads to dig deeper than just the protests.”

Social media allows anyone to self-publish images and video. This very powerful attribute allowed 17-year old Darnella Frazier to capture the killing of George Floyd with her cellphone. But it also means that individuals act as their own editors, and might not have the wherewithal to assess how context and visual tropes might be used to weaponize a viral image.

In the newsroom, editors have an enormous responsibility to consider the implications of showing a face. Lewis said, “We are the ones that decided what needs to get out there and in what context. What is important to the story and the narrative of this event visually. And that has serious consequences in the scope of the present and how history will reflect on this moment.” Given the disorienting nature of protests and occasional bouts of violence, one could argue that photographers should try to capture as much as possible, and leave publishing choices to editors, who hopefully can contemplate whether the inclusion of an identifiable face advances a story or not.

Lewis does, however, make exceptions for photos taken within authoritarian countries where the risk of harm is significantly higher for the subject of photos. In Hong Kong, Lewis pointed out that “protesters came completely masked up, hidden and pretty much unidentifiable… [but] if a protester had to remove their mask for water or something… it was just a courtesy that the photographers wouldn’t photograph them in that state.”

The issue around the ethics of photography and photojournalism in public spaces typically pits First Amendment rights against social mores and courtesy. For example, it is perfectly legal to photograph a child in a public space, but photographers often extend a courtesy notification to a parent or guardian. Similarly, photographing the homeless is perfectly legal and steers clear of any age considerations, but many photojournalists and editors would object to “fly by” photography because of the potential to dehumanize the subject, and reinforce negative stereotypes of a vulnerable population.

Photographer concern for vulnerable populations has evolved over the decades, and certainly wasn’t the norm during the golden years of publications like National Geographic. Although we often discuss photojournalism ethics in the context of cloning and staging of photos, more recent discussions have revolved around the exploitation of the photographed. In other words, ethics aren’t immutable, and now is a good time as any to revisit how we depict people at protests.

“For so long photojournalists have emphasized their intent as if that’s all that matters,” said Pixley. “The actual impact of our photographs is all that remains once the photos are out there in the world, for better or for worse. We owe it to ourselves, our profession and our public to critically consider the potential impact our photos might have well beyond our original intentions.”

PhotoStatistica Lets You Analyze Your EXIF Data in Bulk