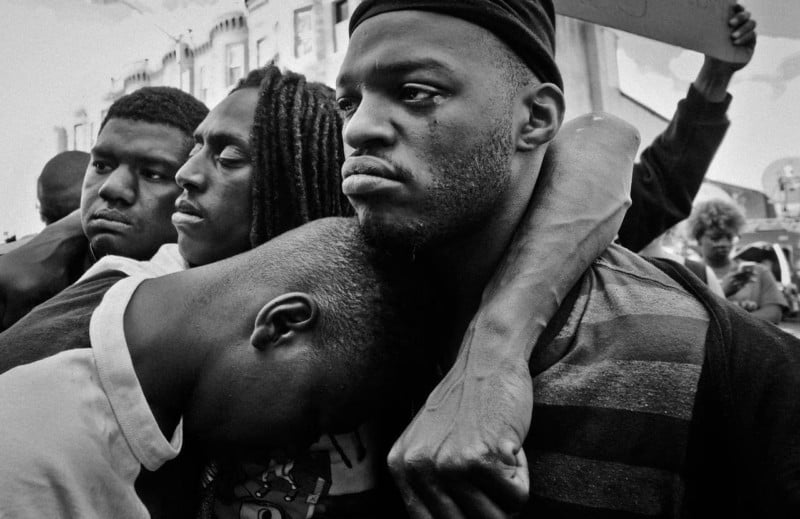 Editor’s note: Veteran photojournalist Yunghi Kim (@yunghi) sent me the following thoughts after the publication of my article about the ethics of showing protestors’ faces.

My professional perspective is that there is a problem with the Poynter piece “Photographers are being called on to stop showing protesters faces. Should they?” The headline is as misguided as the piece is for it implies an acceptable line of censorship by suggestively asking “Should they?” Many question the ethics of showing person’s identity. In fact, this is completely backwards. You have to ask yourself: is agreeing not to show a person’s face against the ethics of journalism?

There are situations where identity of a person may be shielded or may need to be shielded such as a sensitive, non-news or non-public situation (understanding this distinction is crucial), but deliberately shielding a person’s identity shouldn’t ever happen – it should certainly be the exception, not the norm.

Mourning Freddie Gray April 28, 2015. Men mourn the death of Freddie Gray at a protest in West Baltimore. Gray died from spinal cord injury sustained while in police custody. A string of police-involved shootings and brutality claims have launched national protests with high profile deaths of Michael Brown in Ferguson, Missouri, Eric Garner in New York and Freddie Gray in Baltimore and others. With Baltimore and Ferguson riots, the country continues to struggle with the realization the race relations in America have not changed much and many compared it to the struggles before of the Civil Right Movement era of 1960’s. Protests in West Baltimore near burned out CVS/pharmacy over death of Freddie Gray, 25, Riots erupted after the funeral Freddie Gray.
Photo credit Yunghi Kim photo /Contact Press Images

Police undercover or in deep cover on a bust or raid obscure their identity in advance knowing that they could possibly be photographed in a public space. Individuals wanting or needing to afford themselves of some identity masking can do the same. It is absolutely not on us to be thinking, or heaven forbid, checking whether we can show a subject’s face.

Imagine an entire publication with just the back of the heads shown – no faces – photojournalism would be dead. In fact, in some of the earliest days of the pandemic, images suffered purely because of the distancing required – the lack of seeing faces closely, a loss of intimacy in photography. Going a step further, to shield goes against the basic foundation of what makes photojournalism (and what often makes a compelling photograph).

There are some notable exceptions like shielding a rape victim’s identity, the identity of a child in or accused of a crime, or a protected witness.

Normally, shielding of any kind is an institutional policy decision or explicitly performed in consultation with your editors and publications. One weighs the merits (and newsworthiness) of doing so. There should always be a discussion.

There are two circumstances that have placed a lot of young and less experienced photographers on an already slippery slope. Digital photography has given rise to editing right away in camera. Notably that does two things: it takes your eye away from photographing and permanently deletes an image that might have great relevance in 24 or 48 hours, even if it may be banal frame.

The other issue just as prevalent is, in this era of freelance, when “validation” comes from simply being part a group, the rigorous structure of discussing journalistic ethics and standards just doesn’t exist. Young photographers don’t always learn to weigh the newsworthiness or appropriateness of situations without some guidance of those perhaps more seasoned. Furthermore, if you’re deleting as you go or posting immediately as you go, you can make irrevocable decisions with consequence especially when images taken are used immediately or principally for social media and less for publication reporting.

The bombardment of images on social media is also a reason some subjects do not want to be photographed, as they are uncertain as to how the image will be used or how long it may exist on the internet (my Instagram is on private setting Instagram.com/Yunghi.kim). As the harassment of photojournalists simply doing their job has become a daily occurrence on streets, I find myself frequently having to spend time explaining to subjects that I have just photographed on the street the basic tenets of First Amendment and freedom of the press. I sometimes even carry tearsheets with me to show what I do as a freelance photographer who is not on staff somewhere.

A big part of photojournalism is about capturing emotions, faces, and expressions in the moment. It is therefore crucial to show the faces you photograph. Need we be reminded of the basics of reporting (read: caption writing) who, what, when, where and how? If you agree to some activist’s dictate not show faces, then you need to ask yourself, are you a photojournalist or activist? And where do you draw the line?

How about a police officer who bashes demonstrators and doesn’t want his face shown, because he says protestors will ID him and throw bottles at him. Or what about white supremacists, standing on the steps of buildings in public spaces who don’t want to be photographed either? Not photographing based on subject’s directives is nothing short of self-censorship.

Photojournalists have a right to their personal views but they should also understand the role of photojournalism. It’s different from your grandmother’s or uncle’s perspectives: it is to report and document, and to inform the reader as best as you can without fear or favor.

Photojournalism is more than portraits of family, friends, and selfies. To navigate fast moving events defined as news, it takes experience and street smarts. Mastering this and other intuitions, knowing when to obscure an identity (shooting obliquely or from a different angle as may be called for) is profoundly necessary and valuable skill in toolkit of photojournalists.

Photojournalism very often calls for a directness and intimacy with subjects, not everyone is comfortable with that photographic approach but an ethical directness in how you deal with your subjects should rarely be a negotiating point.

Photojournalism is not for everyone. I was pepper sprayed last week along with many of my colleagues. I didn’t think twice about it other than to curse! Photojournalism also means I sometimes takes physical risks, I bought into this risk of the job when I embraced the profession 36 years ago.

About the author: Photojournalist Yunghi Kim is a special contributor to Contact Press Images, founder of Trailblazers of Light, and founder and funder of the Yunghi Grant. This article was also published here, and is being syndicated with permission.

These are the Winners of the 2020 Sony World Photography Awards